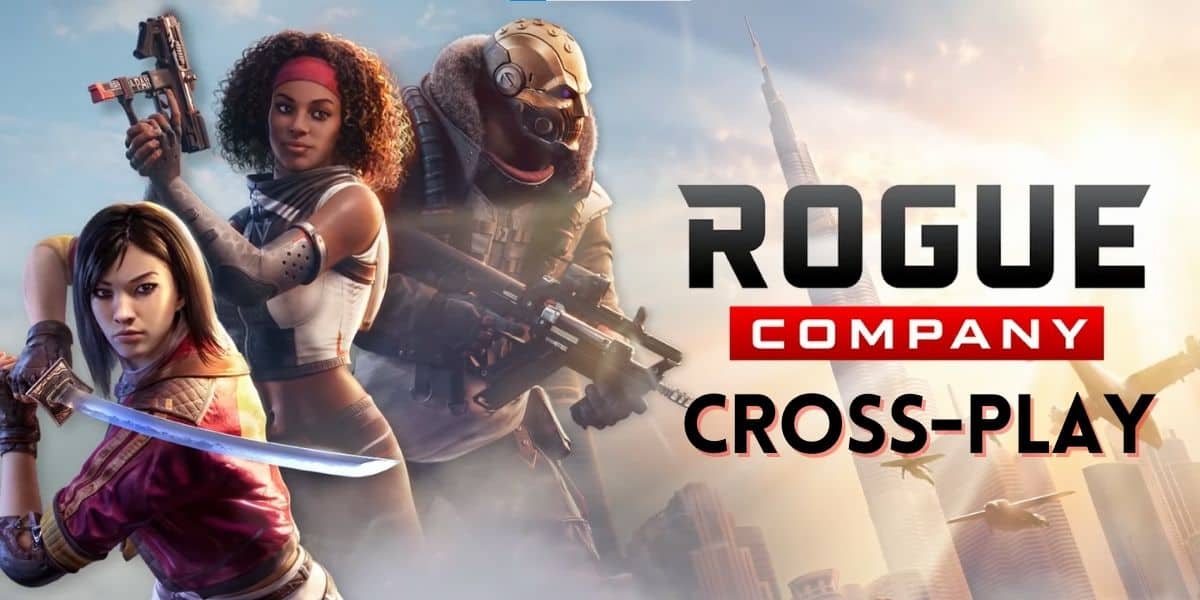 For many years, gamers have asked this question – how can you play your hallowed game on a new platform?

Fortunately, now you can play your favorite RPG games on the go, thanks to the Nintendo Switch.

However, are you going to drag yourself through those lengthy opening chapters again? Or maybe you have dedicated countless hours to a multiplayer game and think it isn’t worth it to start from scratch with a new account.

Rogue Company is a trendy, aggressive multiplayer game that has recently become free to play on PC and console platforms. This is sensational news for gaming enthusiasts who have been eagerly awaiting the launch of this title since its closed beta release.

However, if you’re just stepping into the marvelous world of shooting multiplayers, you’ll discover below if Rogue Company is cross-playable and also learn how to cross-save the game.

Is Rogue Company A Cross-play Game? 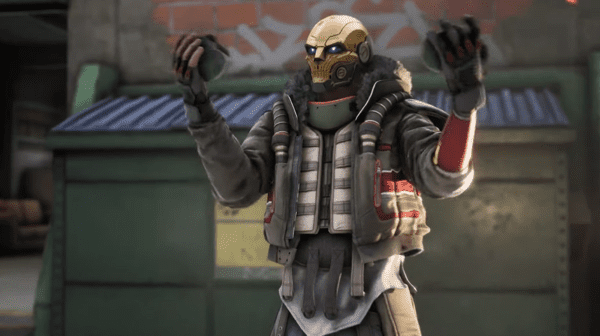 Hi-Rez Studios, the publisher of the game Rogue Company, added the cross-play feature to compete with the likes of fan favorites like CSGO and Valorant. Rogue Company supports full cross-play across various platforms like PC, PS4, Xbox One, and the Nintendo Switch

Additionally, there are a few hurdles to jump over before gamers can smoothly experience Rogue Company cross-play. Here are all the details you will need to jump right into the cross-play and cross-progression system in Rogue Company.

Bonus Read: Revel in Norse mythology with AC Valhalla as you wander around Asgard in the search for new islands. 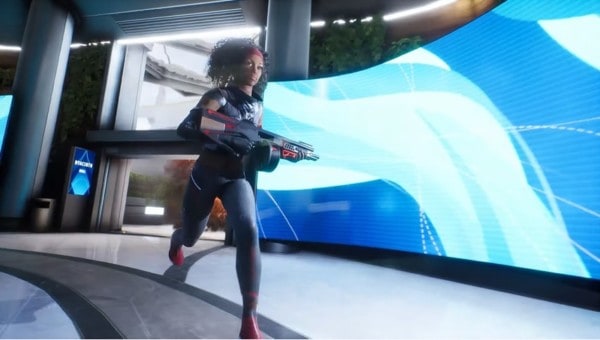 The delicious cross-platform multiplayer system of Rogue Company allows gamers to team up with players across Xbox One, Ps4, PC, Xbox Series X/S, and the Nintendo Switch.

While console players are matched solely with players from non-PC platforms, mixed teams containing both PC and console players will be paired and jumbled with other mixed-input teams and PC gamers.

Let’s take a look at the steps that will get you started with Rogue Company Cross-play.

Additionally, if you happen to be playing without any friends in your party, you can omit these steps and head straight to matchmaking. Currently, the cross-play feature in Rogue Company is set to be on by default and cannot be changed.

By following the steps mentioned above, you will be able to add friends to your party and get instantly placed in the cross-play lobbies of Rogue Company.

How To Cross-Save Rogue Company?

In addition to the cross-play feature, Rogue Company also boasts saving cross-platform progression. While this allows players to utilize their primary account across various platforms, it also keeps track of your progress and precious unlocked items regardless of the machine you play Rogue Company on.

Consequently, to take advantage of the cross-save function, players will be required to link their accounts from multiple platforms to their primary account.

For the Rogue Company gamers wondering how to go about linking their accounts, this step-by-step guide will answer all queries.

Note: Keep in mind, this will be the primary account that players will link all other accounts to.

Most importantly, players should link the account they have invested the most amount of time into when logging into the website. Doing so will ensure all your progress from this account will get carried onto the other platforms.

Progress and purchases from the primary account will be transferred to all the other linked accounts for Rogue Company.

For instance, let’s say you’re a PC devotee and have been playing Rogue Company on the PC and want to link your seldom-used PlayStation account. By selecting the Epic games account as the primary one, all progress, experience, and your hard-earned item unlocks obtained on the PC will be waiting on standby for you when you log into your PS4 account.

Pro Tip: All purchases and progress made on non-primary accounts will be replaced by the statistics of the primary account when you log in to other platforms.

However, players needn’t worry about losing their purchases from other accounts. The other accounts will remain dormant until players choose to return to them later on.

If you feel like you’re missing out on your purchases and unlocked items from your non-primary Rogue Company accounts, reverting to your other accounts is just as easy as linking them.

To do so, simply head to the official Rogue Company website and enter the account manager. From this panel, players can choose which account is considered the primary account, thereby switching between the various accounts with ease.

However, if you do happen to accidentally switch your accounts or have linked the wrong one, you can revert your changes using the same method. Similarly, if you’re a player who prefers to have multiple accounts for the various platforms, the account manager will also enable you to unlink accounts and keep them separate.

Pro Tip: It is highly advisable to allocate a primary account early on as it helps players keep their progress uniform on all platforms.

Like most successful free-to-play games, such as Apex Legends and Fortnite, Rogue Company also incorporates the system of microtransactions. This allows players to purchase in-game cosmetics like legend skins, weapon wraps, and wingsuits.

These cosmetic additions can be bought with the help of the in-game premium currency known as Rogue Bucks. However, players should note that currency purchases on one account will not be transferred to any other linked accounts in Rogue Company.

Similar to Rogue Bucks, there is another in-game currency called Reputation that players can earn by playing games and completing their tasks rather than spending real money. Although, unlike Rogue Bucks, all Reputation earned by a player on one platform will be shared on all the linked Rogue Company accounts.

Pro Tip: Linking your Twitch account to Rogue Company will give players access to drops and in-game items awarded as a result of watching streams.

If you’ve been playing shooting games on a console, you’ll know how agonizing it is to play against PC players using a keyboard and mouse. Even for a console veteran, there’s often a fairly large skill gap.

This certainly does not mean playing on any console platform is dreadful! There are massive advantages to both platforms. However, by and large, it is reasonably difficult for console players to play a fast-paced shooter like Rogue Company against someone on the PC.

Console enthusiasts will be pleased to know that it’s way too easy to toggle cross-play in the game. Keeping this in mind, here’s everything you need to know about disabling cross-play in Rogue Company so players can enjoy the game without getting laser beamed into oblivion.

For a long time, gamers were unaware of this setting. Since the launch of Rogue Company, the cross-play feature has been enabled by default and could not be turned off even if players wanted to.

The process for adding friends in Rogue Company is the same across all platforms and can be done via the ‘social’ tab in the main menu. By typing the username of other players, you can directly send them a friend request regardless of their platform.

To distinguish between the various platforms, miniature icons beside a player’s name will indicate the platform they are playing on. For instance, an Xbox logo for Xbox players and a monitor symbol for PC players will be attached to the username.

However, if your friends don’t play shooting games, you can add random players with which you have had a good game. To do so, players will have to go to the account information in the main menu after they leave a match to find details about players in their previous squad.

This feature is extremely useful in shooting games in which teaming up with a skilled group of players can help you dominate your opponents. Consequently, players who fancy a timeout can do so by setting their online status to ‘Do Not Disturb’ in the ‘Social’ tab. Switching to this mode will prevent players from receiving any friend requests and invites to join another party. 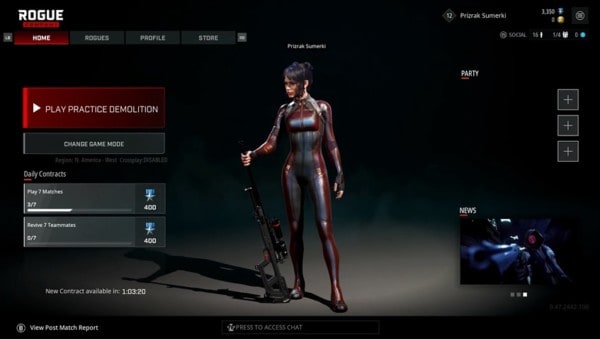 Rogue Company is a multiplayer-only, free-to-play game that combines assets from various successful shooter games like Apex Legends and Counter-Strike. This presents a complete experience that requires dexterity, endurance, and a lot of team chemistry to succeed.

Though the game could improve from a technical standpoint, the unique characters, various maps, and complex strategies are enough to keep any gamer hooked for hours.

For players wondering if Rogue Company is cross-playable and cross-saveable, we have answered all the FAQs and provided tips to make your experience as epic as possible.

Dive in for a chance to go Rogue and annihilate your opponents!

Bonus Read: Stay ahead of the competition and discover how to play PUBG Mobile on PC.