Daggers don’t get the love they ought to in Warframe. Players generally go for much more powerful weapons to take down their enemies. However, with the right build and proper accessories, daggers can be an extremely powerful tool in any Tenno’s arsenal. So let’s take a look at what we think are some of the best daggers in Warframe.

Though you’ll want to replace these when you can, with the Fang Prime or another more powerful dagger, Fang makes this list because it might be the very best starter set of daggers in the game. When you equip this slick weapon, you’ll be well prepared for early close range encounters with enemies. When you equip it, you also get a 5% movement speed boost, which is super valuable early in the game when your defenses are still low.

Though it has a decent attack speed, the Ceramic Dagger makes this list for a very cool feature that it possesses. When you attack an enemy, make sure to use lunging strikes. The reason is simple. On the fourth hit, your Tenno will dash forward for one last attack. If it connects, it will cause bleed damage. But that’s not all. If you manage to land the fourth strike on an unaware enemy, it will trigger a stealth kill. It’s a great feature that makes chasing this weapon down worth the effort.

This is an exceptionally powerful dagger, so the fact that you have to reach the Exalted rank with the Red Veil to acquire one might just be worth the effort. Beyond its impressive base stats, the Rakta Dark Dagger has two features that should have every player drooling. The first is that you’re much more difficult to spot when you use this weapon. This makes it far easier to close the distance between you and an enemy. The second special ability of this weapon is that when attacking an enemy afflicted by Radiation, the weapon restores your shields, and what’s more, it will grant overshields. 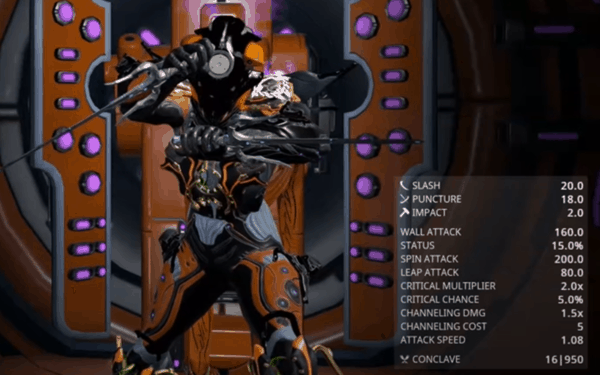 Whether its high attack speed, decent puncture and slash damage, or high status chance, the Okina dagger pair is one of the most reliable and all around great daggers in the game. Their biggest downfall is probably its limited impact damage, which reduces its effectiveness against shields. But overall, this is an incredible balanced and useful set of blades.

Complete the Stolen Dreams quest or purchase them from Nakak to get your hands on these deadly twin daggers. The Ether daggers have an incredibly high spin attack damage, and a very nice base slash damage stat. In addition to that, it also does some impact and puncture damage. With the right build, your DPS with the Ether Daggers can go through the roof!

Though there are plenty of options, we think these represent the best daggers in Warframe. Regardless of how you choose to dispatch your foes, don’t forget to check out our other guides for the best tips for surviving the brutal world of Digital Extreme’s superb game.

In this article:action games, best of, daggers, digital extremes, warframe

Serious Focus in Warframe: How to Remove Lenses

Warframes and weapons can use focus lenses that can have significant impact on your stats and how you approach combat. Knowing how to spec...