Benefits of a Faction

When you join a faction, there are several benefits you can claim for your alliance. They don’t come all at once though. You’ll need to rank up your relationship with your chosen faction by completing missions and tasks favorable to your partners. The bread and butter of what you’re looking for is Rank 3. That’s when you start getting access to proprietary technology that you can’t get anywhere else.

You can defect from a faction when you feel the time is right, but be aware that there will be consequences for that betrayal. More on that in a bit.

How to Join a Faction

To join a faction is pretty straightforward when you know what to do. There are four easy steps.

First, head to your ship and navigate over to the right console menu.

Second, on the bottom right of that menu is the Galactic Powers option, select it to bring up a list of all of the galactic powers in the game.

Third, navigate through the list of powers, and select the one you wish to join. That will bring up a sub-menu detailing a lot of vital information about the faction. It has everything from their galactic standing to their main focus and desires for influence in the galaxy.

Fourth, select the Pledge Allegiance button. That will take you into yet another sub-menu where you can review all of the bonuses and costs to joining and leaving a particular faction. If you’re satisfied with your choice, confirm your allegiance, and that’s it. You are now a member of a faction. 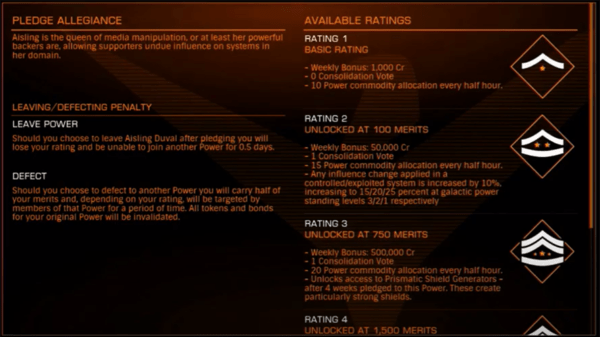 Risks of Joining a Faction

Before you join a faction, know that there are costs for membership. The most obvious are listed right in the Pledge Allegiance screen displayed above. Make sure you’re ready to assume the risks associated with defection before you take the plunge with a particular group.

But the costs go beyond that. If you’re playing in a public game and run in to other players that are allied with a different faction, you might as well have a target painted on your back, because as with all things in life, human beings like defeating anyone on a different team. Keep that in mind before you venture out in the wild waters of public games.

As with lots of games that have a ton of menus, systems, and mechanics, Frontier could have done a much better job of explaining in Elite Dangerous, how to join a faction. The good news is that it’s not a complicated process once you know the trick. Now get out there and ravage the vast infinite reaches of space, and don’t forget to check out some of our other incredible guides to your favorite sci-fi epics.

In this article:elite dangerous, factions, frontier, how to, howto