Colorful bean-like characters, dressed in bright costumes, tumbling over each other, have recently taken over the internet. Thanks to the launch of Fall Guys: Ultimate Knockout. While some of the introductory uproars have calmed down, a plethora of gamers are still hooked to this fast-paced battle royale.

Players have to battle it out through a sequence of mini-games if they want to be the last bean standing. For instance, gamers will have to team up with other beans to hoard eggs in one of the mini-games, whereas you’ll be required to sabotage your opponents to get the victory crown in others.

Fall Guys gets competitive from the moment you jump into the game with ruthless opponents ready to take advantage of each of your mistakes. However, the trick is not to get discouraged while you learn the ins and outs of Fall Guys.

4 Tips And Tricks For Winning In Fall Guys

Whether you’re just a beginner in the world of Fall Guys or you’ve been in the bean gaming scene for some time now, these tips will help you step up your gameplay and win every round in Fall Guys. 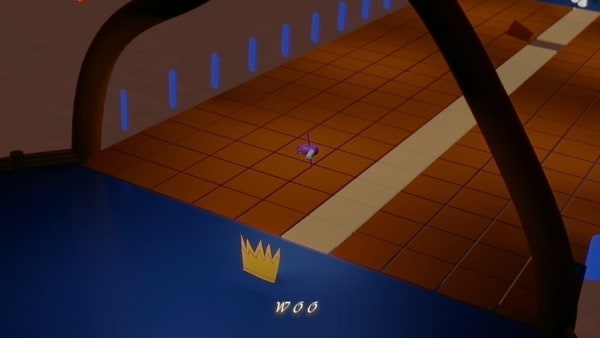 1. Use Jumping To Your Advantage

Fall Guys is all about jumping at the right time. The aim is to keep your bean going while you avoid obstacles and overtake your competition. While players can jump their beans onto various objects, some objects give the bean a mobility boost.

For example, obstacles sporting pink confetti bounce your bean high up, giving players a birds-eye view of the crowd below. Contrastingly, while jumping over other beans can help you avoid obstacles in the most crowded rounds, the fall could be tricky as your bean could get trampled by the competition.

The diving move is like a wolf in sheep’s clothing in Fall Guys. While most players avoid diving to sustain their momentum, diving can be game-changing for your bean at the appropriate time.

You’ll notice your bean building momentum quickly. Therefore, hindering your ability to maneuver through certain obstacles. Above all, diving is super handy when avoiding obstacles like swinging axes or fan blades.

While these obstacles would have usually sent your bean flying into the abyss, diving will slingshot your bean forward at the right time. Consequently, while diving down slimy slopes will help you gain momentum, diving on a straight path will slow your bean down.

With that being said, players must look for the opportune moment and dive without hesitation to slide ahead of the rival beans in Fall Guys.

While most players are busy jumping and diving in a game, beans using the grabbing move will always manage to stay ahead of the competition. Grabbing is a versatile skill that can be used as an offensive or defensive move.

This skill allows players to save their beans from falling off the map or to stop other beans from reaching their objectives. Alternatively, you can outrun other beans by grabbing onto ledges, allowing your bean to run on a different path.

Not to forget, beans feeling cheeky can sabotage their opponents by pushing them off certain maps. Furthermore, they can also steal soccer balls in some game modes.

Above all, to successfully use this skill, players will have to be precise with their timing, making practice a necessity if you want to win Fall Guys.

Fall Guys is a flashy game with brightly colored beans and as a result, getting confused during rounds is a common occurrence. Hence, it’s a good idea for new players to follow their fellow beans and not get stuck in a loop of obstacles that would diminish your odds of qualifying for the next round.

Contrastingly, beans must also take the time to slow down and observe the board. While the game is essentially a race, slowing down will help beans avoid obstacles and will be faster than running aimlessly in the long run.

However, players will often find themselves in the middle of a bean mob. The trick here is to flow with the mob and find an exit once other beans scatter. Most importantly, trying to escape at the wrong time can lead to your bean getting trampled or pushed off the map!

By simply incorporating these tips into their game-style, beans will have a higher chance of winning Fall Guys. Although these tips will help you outrun your opponent’s beans, Fall Guys has over 22 maps filled with various obstacles and objectives.

Let’s take a look at six crucial map-specific tips that will help you win each round and get you closer to the victory crown in Fall Guys.

Bonus Read: Learn how to chat in Valorant with this simple and straightforward guide. 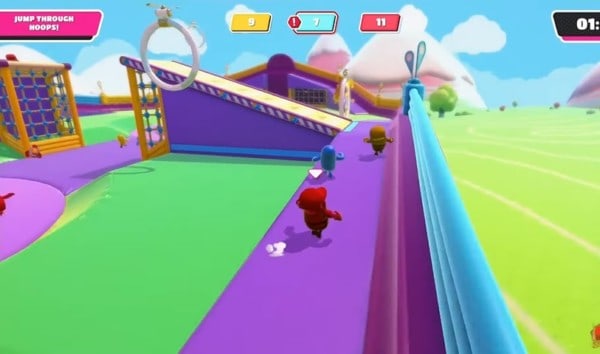 Similar to other battle royale games like PUBG and Warzone, in Fall Guys, every player will have an affinity for maps that make them feel like they’re golden. At the same time, there’s a strong dislike for other maps that will be tedious to get through.

Players finding themselves in this situation have no choice but to improve their game on a map-to-map basis. Meaning, your beans will have to familiarize themselves with the nooks and crannies of each map to outlast their 59 opponents.

Here are six essential map-related tips and tricks to help beans overcome every obstacle Fall Guys has to throw.

While the objective is easy to adhere to, this map features most of the game’s crucial obstacles, making it an attractive map for beginners.

Players often forget the jump in the final stretch of the map and end up at the previous checkpoint. To master this board, beans need to follow the arrows and jump over the tricky gap.

See-Saw in Fall Guys poses more of a challenge than the local playground see-saw. While most beans try to blitz past this map, patience happens to be the secret to winning this game.

Rookie beans often jump ahead on the sea saw, causing them to topple and fall over. Remember, players must remember to avoid jumping on platforms that are at a ninety-degree angle. Above all, waiting for a see-saw to return to normal and jumping in the white middle areas will assure you a victory in this round.

Despite the game being a race, players will often find themselves working with other beans to get the see-saw to a stable state to walk on. In addition to that, beans must always stay vigilant as the enemy will continually try to make it hard for you to close the gap.

This map is all about the positioning of your bean. Following the crowd will only get you so far in Hit Parade. But, to move ahead and be the fastest bean, players will have to stick to the sides, moving along the walls to get past the crowded turnstiles.

The most challenging part of the map comes in the form of wrecking balls. Although rushing through this section can get you past the wrecking balls once or twice, it is advisable to slow down and wait for a better opportunity. Consequently, observing the shadows of the wrecking ball will help beans pinpoint their exact location and avoid them.

Unlike other maps where beans can sick to the crowd and get past obstacles, Hit Parade requires beans to slow down, distance themselves from the crowd, and wait for the perfect moment to move forward.

You don’t want to be the bean stuck in a bean traffic jam, nor do you want to be the one that gets knocked by the wrecking balls. Follow these tips to ensure that your bean always comes first when playing the Hit Parade map in Fall Guys.

Bonus Read: Find the answer to why Apex Legends keeps crashing on PC.

Door Dash is another map in Fall Guys where following the crowd can get you past obstacles safely. Yet, the tables are turned when you’re the bean leading the crowd. Even more startling, recognizing which doors are fake is almost impossible until the last three rows of doors.

Similar to Hit Parade, slowing down in this map will give your bean an advantage. By letting other beans make mistakes, you’ll have a better chance of finding a safe door and reaching the final three rows.

Above all, beans must keep a close eye on the triangle patterns on the last three doors if they want to be the first to cross the finish line. The pseudo doors have a smaller triangle at the bottom as compared to the real doors that have a slightly larger triangle.

Despite this noticeable difference, the map unfolds rather quickly, making it difficult to apply this trick. Fret no! With enough practice, beans will surely get the hang of it and are almost guaranteed to come first when racing in Door Dash.

Beans playing this straightforward mini-game are inevitably bound to be hit by fruits when trying to reach the finish line. Simply put, Fruit Chute is technically a reverse treadmill with oversized fruits being flung towards the tiny beans.

Although the map can accommodate all beans with ease, rushing through the middle will put you in the way of a wild watermelon, causing you to lose your progress. Similarly, jumping or diving on the treadmill will only hinder your progress by slowing your bean down.

The key to ensuring your bean doesn’t get blown away by wild fruits is to stick to the side of the map and use the bouncy pink triangles at the sides to evade the fruits. Though most fruits tumble down the middle, sticking to the sides will allow you to dodge the sneaky side fruits without any issues.

Most importantly, players shouldn’t shy away from making sharp turns to dodge the fruits. If you hesitate, getting hit by a wild fruit will set you further back than an evasive maneuver.

Players might say that Hex-A-Gone is the most stressful level in Fall Guys due to the disappearing hexes beneath your feet. While hopping from tile to tile can prove as a good strategy, the slightest of missteps can get you eliminated, especially when you’re so close to the victory crown.

One of the ideal strategies includes quickly falling to the last layer of hexes as soon as the game starts. Once your bean has reached the last level, create a hole in the layer’s center by essentially running around in circles. Players must remember to start at the center and work their way outwards.

While most of the opponents will fall through your masterpiece of a trap, some beans might be lucky enough to land on a platform. In the event of a head-to-head, diving while falling will come to your rescue as it will slow your bean down just enough to buy some precious time.

To sum it up, every level in Fall Guys requires a bit of luck to make sure your bean doesn’t get knocked down, but knowing the ins and outs will guarantee you a higher chance of winning than most of your opponent’s beans.

For all beans wondering how to win Fall Guys, practice is the only solution. Factually speaking, players incorporating these tips and tricks will soon rise to the top, becoming king of all the beans in Fall Guys.

Now that you have the edge over other players due to these gameplay and map-specific tips, jump in and try to claim that crown for your bean!

Bonus Read: It’s time to take PUBG Mobile to the PC with these simple steps.