Developed and published by Mediatonic and Devolver Digital, respectively, Fall Guys functions as a platform entailing a battle royale gaming environment. You could either download it on the PC through Steam or download it for the console through PlayStation Plus.

If you’re wondering how to play Fall Guys, I suggest you begin with either Gate Crash or See Saw. You’ll land up strengthening your jumping moves, and there’ll be lower chances of dying. Remember, players can make jumps across mildly varying distances at varying speeds. The sooner you master your hops, the higher chance you’ll be the last bean standing amongst the remaining 59 opponents.

You don’t want your brightly dressed bean-shaped character falling around unless you’re simply playing for the kicks! This fast-paced BR game demands players to stand out as the last bean surviving on screen. Get ready to skim across dicey hurdles, hoard eggs while collaborating with other beans, stage a fight against the usually unbending laws of physics, and outlast your opponents to take the crown.

Bonus Read: How To Change Name In Warzone

Let’s look at a few tips and tricks that will simplify the process of playing Fall Guys: The Ultimate Knockout. Each of these suggestions will guarantee you at least threefold the chances of being the lone survivor. 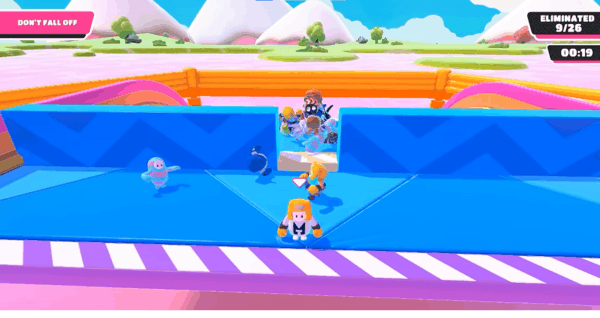 This game is a lot about the jumps. Your position, overtaking skills, and speedy progress directly affect the bean’s capability to jump. Whether you want to steer clear from a beginner making your race difficult, or you want to get to an obstacle you prefer over the current one, jumping will sow the seeds for a positive end result.

Even better, the way you jump can be the make it or break it element when approaching the finish line!

Not that I’m saying falling is essential, but it’s not as bad either. One nudge from a hurdle may either knock you out of the game or on the bright side, it can propel you way ahead of your opponents.

All mini racing games offer this mild, low probability perk of gaining much more speed (through an unfortunate event) than your fastest running moves offer. Thus, try and make wise falls. Your intention should be to get pushed ahead in the race by the moving pieces on screen.

3. Move With The Pack

There’ll most definitely be a point of getting stuck amid a rut of other bean characters. Rather than fighting the commotion and forcing an exit, go with the flow for as long as possible. Slowly and steadily, other bean characters begin to scatter away from the rut, and you’ll spot an opening. That’s when you escape!

If you attempt to flee the rut out of a hurry, there’s a high chance you’ll fall behind or get completely knocked out of the game.

To start the game, don’t go for glory. Simply perform better than 40% of your opponents, and you’ll automatically pick up pace and skill.

4. Be A Good Spectator

Considering you’re a beginner, ensure that you don’t skip the spectating aspect of losing in Fall Guys. Spectators can enjoy two benefits – fulfilling the entertainment and observant elements of this game!

Firstly, you’ll have a hearty laugh at watching the number of ways in which the bean characters can get kicked out. The tumbling and fumbling will also give you a wide-angle view of the scope of elimination mediums. Secondly, you’ll observe the way most bean characters attempt to dodge an obstacle, irrespective of them being successful or unsuccessful. Take it as free lessons to amplify the effectiveness of your process for future gameplay.

5. Master The Art Of Diving

Diving is the single most effective move in your arsenal while playing Fall Guys. As long as you aren’t diving on straight roads (since it significantly slows you down), make sure to use the diving move often.

You’ll be more likely to dodge the bullet of swinging axes and blades. What’s more, you can bypass 80% of hurdles through diving and avoid being flung into oblivion. Be it slime-loaded mountains or the last phase of the race where you’re head-to-head with an equally brilliant racer, diving is an absolute gamechanger.

For instances that require climbing a wall or ramp, grabbing is imperative to progress without sacrificing on time. Keep in mind, the more accurate your timing is while grabbing, the quicker you can harness the positives of this move.

It also helps prevent your opponents from robbing your soccer balls and sometimes even assists in stealing their tails in different Fall Guys modes.

And guess what? Hugging another player is rewarded as an achievement. Basically, if they’re grabbing you and simultaneously, you grab them back, you’ll get more points. I think that’s a fantastic addition to this game!

The goal is, of course, to come first and qualify. However, that doesn’t call for mindlessly reacting to the fast pace of your opponents. If you keep pacing rapidly just because your opponents are, it’ll take a long time to start evading hurdles. Moreover, you’ll be like a headless chicken falling for the same trap again and again.

Despite Fall Guys being a race, I suggest you slow down at times and race at what speed is comfortable. Eventually, the more significant number of obstacles you skip and the higher consistency in your speed, the more are the odds are in your favor. In short, do not panic and stay relaxed.

Refrain from approaching the suspended grounds with edges. If you don’t, expect your bean character to slide off for good. The trick is to maintain your joystick positioning in the direction you want to approach. This way, even if your character falls and rises again, it’ll at least be aware of the path to the finish line.

Often, I’ve found the need to keep a safe distance from other players because their strengths are my weaknesses. In such matters, turn on the player’s name displaying feature. This keeps you aware of their location, and you can navigate accordingly.

For all gamers interested in learning how to play Fall Guys, practice is the sole solution. Blend in some knowledge regarding attacking and defensive moves, and be precise with your call of whether to sabotage or not.

Whether you want to grab an opponent right before the finish line and make them stumble over a confusing hurdle, keep a sharp eye on the Qualified counter on the top right of the screen. You don’t want an opponent to take advantage of your naughty behavior and come first!

I strongly suggest leveraging a few attributes of this game, such as the Season Pass and bean customization options. Not to forget, there’s no shortage of surprises and intelligent moves in Fall Guys: The Ultimate Knockout.