Just like in any other aggressive shooter, gamers playing Valorant are required to constantly stay in touch with their teammates. However, not everyone has a professional gaming microphone, and the number of players with a decent microphone is leaner.

To compete with the likes of Apex Legends, Fortnite and Warzone, Riot Games, the developer of Valorant finally added the chat feature to the game. Although voice chat is the favored method, being able to text chat with your teammates can just as well help relay information in sticky situations.

While chatting with your teammates can help you in certain situations, you will often find yourself communicating with the other teams as well. And for enthusiasts who are just diving into Riot Games’ latest shooter, chances are you haven’t figured out how the chat system works.

Don’t fall victim to untimely and unfortunate deaths because of your lack of knowledge to communicate with your teammates. Just like all team games that involve shooting, you’ll do wonders if your teammates are kept in the loop regarding your upcoming moves, demands, heads-ups, and so much more.

This guide will help us hop right into how to chat on Valorant and up your gaming experience. 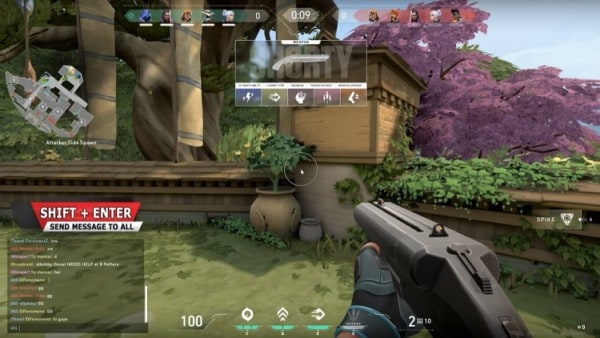 Chatting is Valorant is as simple as pressing a couple of keys at the same time, thus allowing players to chat with their buddies and trash talk with their foes. However, it’s advisable to stay friendly in the chats to avoid getting into unwanted trouble.

A chatting system is the key element of almost all battle royale games. This important feature can be the small difference between victory and defeat. You don’t want to be caught off guard due to the lack of a microphone. We suggest gamers take advantage of the newly integrated chat system in Valorant and always stay ahead of the competition.

Did You Know: To commend your opponents for their competitive performance, keep up with the respected gaming etiquette of acknowledging their efforts by typing GG in the chatbox.

How To Chat With Everyone In Valorant?

To chat with everyone in Valorant, you simply have to press the keys “shift” and “enter” simultaneously. Alternatively, players can also access the all-chat in Valorant by pressing the ‘enter’ key to access the dialogue box. Here, players must type the command ‘/all’ followed by the message to communicate with other teams present in the game.

Despite the commands being obvious, players all over have faced difficulties while chatting in Valorant due to the game’s confusing chatting mechanisms. However, by following the instructions mentioned above, conveying your message to everyone in the game will become a piece of cake.

Apart from the friendly banter and graceful commendations between you and your enemies, the all-chat feature serves another purpose.

For instance, if a hacker manages to sneak into the lobby, everyone playing the game will suffer due to one person. In these situations, the ability to communicate with other teams and inform them about the malpractice makes Valorant stand out from its competitors.

How To Chat With Your Team In Valorant?

To chat with your team in Valorant, players must press the ‘enter’ key. By default, the chatbox is set to send and receive messages within the team. Additionally, players who find themselves to be old school can send a message to the team by typing the command ‘/party’ followed by the message.

While a bit of smack talk adds some comical relief to such mind-intensive games, it is necessary to coordinate with your teammates at all times. Riot has taken key elements from its other creation, League Of Legends, and made a similar chatting system in Valorant. Except for the all-chat feature, which is not present in the former game.

By taking advantage of the team chat, players should discuss strategies before a match. Consequently, the same feature should be used to relay enemy locations and pinpoint item locations. The team chat also aids in reviewing the tactics after a match. As a result, players can receive immediate feedback from their teammates regarding their performance.

Players can often turn the game’s tide by using the team chat wisely and informing their team in time. Above all, being as specific as possible is crucial to the team chat working effectively. Contrastingly, repeatedly using the chat can cause problems due to miscommunication and guide the opponents to an undeserved victory.

Now that you’re familiar with the chatting mechanisms of the game, you might find yourself asking the question of how to differentiate between the messages in Valorant. While this is relatively easy for the experienced eye, newcomers to Valorant might have a hard time distinguishing the messages.

All messages that appear in the chatbox in Valorant have a prefix attached to them. Messages sent from you or any player from your team will appear with the prefix ‘(team)’ followed by the message. Similarly, the prefix ‘(all)’ will be attached to messages sent by other players playing the game.

In addition, Riot Games has added a broadcast feature to the chat system in Valorant, allowing players to broadcast a message to the entire lobby. The game also sends auto-generated notifications to players in the form of a broadcast message.

For example, weapon requests made by players and the weapons they have bought during the ‘buy period’ will be sent as a broadcast to other players in the game.

To distinguish a broadcast message from a team message, players must simply look for the ‘(broadcast)’ prefix before the message in the chatbox.

Bonus Read: Want to add some spice to Valorant? Check out this cheating guide for the best hacks in the game.

Valorant allows players the use to chat modifiers to communicate in various ways. Similar to the ‘/all’ and ‘/party’ commands, there are a few more that not many payers are aware of. Let’s discover a few chat commands that will aid players in expediting their communications.

Following is the list of chat modifiers available in Valorant:

In the spirit of fair play, Valorant has added two more commands that players can use in the event of an unfortunate mishap. Remember, rage quitting is a common phenomenon in the gaming community, with players experiencing this regularly.

If players find themselves in a tragic situation where a teammate has abandoned them, they can now start a vote to nullify the match. To start the vote, simply type ‘/remake’ in the chatbox. However, for the game to be null and void, a majority of players are required to vote.

This command is the last resort. If you’ve lost all hope of winning and you prefer to end it, you can start a vote to forfeit the game.

You can use the commands ‘/ff’ or ‘/surrender’ or ‘/concede’ in the chat to start the vote. But by using this modifier, you will simply be voting yourself and will need a majority of the votes to surrender the match.

More often than not, when a team is at a disadvantage, the enemies will not go easy on you and will try to sabotage the voting system to continue the match.

How To Voice Chat In Valorant?

Besides the usual text chat in Valorant, players can also use radio commands or talk through voice chat to relay their messages. For gamers with a microphone, voice chat is a seamless way of communicating with your team.

Using a microphone allows you to impart clear-cut information about the enemy’s whereabouts before they make a move. Let’s take a look at how to toggle the voice chat in Valorant.

Change these settings and test them out with your friends before the match starts. However, if your team complains that your microphone is too loud, you can adjust the volume in the audio tab.

With the addition of the chat system, Riot Games has given a new life to the game. Give specific call-outs, relay crucial information or engage in a bit of trash talk to keep it lively and entertaining in the lobbies of Valorant!

Players can rest easy knowing that the complexities of the Valorant chat system have been simplified.

Go on! Send a message to your mates or tease a rival. It’s an open season when it comes to chatting in Valorant.

Bonus Read: Keep the ghouls at bay by reading more about the best glyphwords in Witcher 3.