GTA 5 is an action-adventure free roam title published by Rockstar Studios. Despite its genre, this game manages to surpass numerous racing video games that have come after its release.

The driving mechanics of the game breathe life into the cars and give gaming enthusiasts an exhilarating experience.

Every day is a new adventure in San Andreas with a plethora of vehicles to choose from and start your journey. Rockstar has added a feature where players can buy vehicles from the in-game online store if they are to own them.

Whether you want to race around the streets of Los Santos or cruise by the lush countryside, GTA 5 has got it covered.

Bonus Read: How To Change Seats In GTA 5 And GTA Online

Speed isn’t the only factor when it comes to cars in GTA 5. Other stats like braking, handling, and damage resistance affect the overall rating of the vehicle. We will dive deeper into the design of each car and rate the cars based on their overall performance.

Let’s explore nine of the best cars in GTA 5 that will make you fasten your seatbelts! 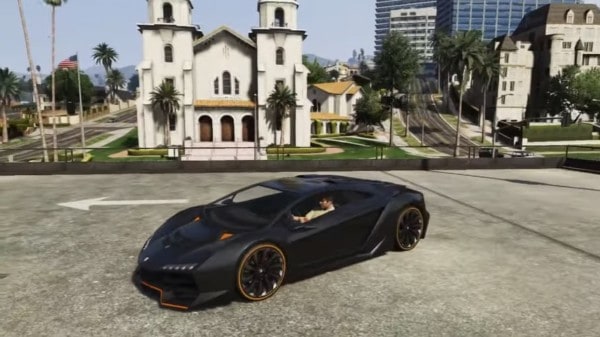 The Pegassi Zentorno is the Lamborghini Sesto Elemento reincarnated. This car features a low-sloping body for additional aerodynamic effects. Crafted to be an exotic hypercar capable of outrageously fast acceleration, the Zentorno glides through the hustle and bustle of San Andreas.

Deriving its power from a V12, the Zentorno can reach very high speeds with ease. Cornering at top speed is now a piece of cake due to its sensitive handling and balanced weight distribution.

Unfortunately, the car is a mess on bumpy roads as its low chassis tends to spin quite often. This responsiveness can be tricky for inexperienced drivers. However, it fails to lose control and seldom leads to crashes.

The Zentorno is hands down the best car in GTA 5. Its responsive handling and alarming acceleration are enough to leave any vehicle behind. Handling this car almost feels unreal and like a cheat code for the perfect drive. All in all, the Pegassi Zentorno will give gaming enthusiasts the best driving experience in GTA 5.

The Progen T20 is a hypercar inspired by the legendary McLaren P1. While the car has subtle concave shapes on the doors that boost its aerodynamic profile, it also boasts butterfly doors similar to the P1.

The T20 has a turbocharged V8 engine that emits a smooth, unique sound. Incredibly responsive, this car cuts through traffic like a hot knife on butter. This impeccable handling is paired with high top speeds, which gives the player a jolt of freshness when driving the T20.

The car handles pretty well at high speeds and doesn’t lose momentum while coming out of corners. Though the acceleration is poor compared to other supercars, the engine gives the rear wheels a dashing amount of power.

The Progen T20 is not only one of the best cars in GTA 5, but it is also the most expensive one. Rest assured, drivers who get behind the wheel of this hypercar are sure to get a bang for their buck! 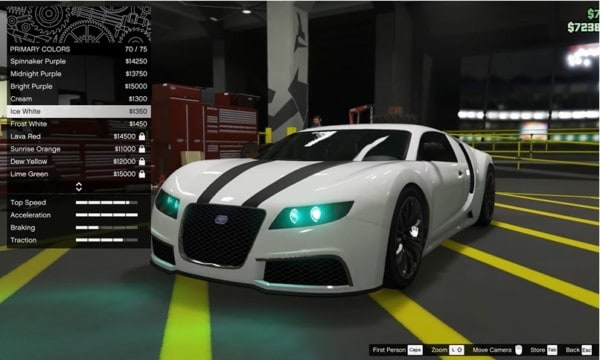 The Truffade Adder is a mirror image of the Bugatti Super Veyron concept when it comes to the general shape. The car boasts a bulky profile compared to most supercars but manages to retain its aerodynamic structure.

The Adder has a monstrous engine under its hood, making it one of the fastest cars in a straight line. A bulky chassis holds the car back and makes it sluggish around the corners, while added weight gives the car that much-needed rigidity in high-speed collisions. Though the acceleration is fairly average, the Adder is exceptionally stable at high speeds.

The Truffade Adder does justice to its real-life sibling! Players are in for a treat when they finally get behind the wheels of this car. Moreover, this car is truly a complete driving experience that both amateurs and experienced players will thoroughly enjoy. 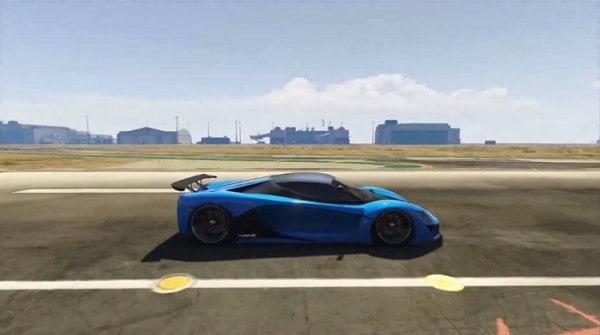 The design consists of many acute contours that give the car an aggressive look. The car’s key specifics resemble the Ferrari Laferrari, with the front edge resembling that of the Lamborghini Sesto Elemento.

Additionally, due to its electric engine, the Turismo R has excellent acceleration.

There is zero loss of power during gear shifts, and this car could easily be one of the fastest cars in the game. Speaking of its durability, it is fairly low as the car can get damaged very quickly after a high-speed collision.

At the same time, owing to its agility, the Turismo R can help you dominate the racetrack as well as evade the toughest of cops. Get ready! This fast-paced electric car will make heads turn as you zoom by Vespucci Beach.

The Infernus hasn’t changed much since we saw Lance drive it in Vice City. Instead of the Lamborghini Alar, the car is modeled after the Lamborghini Murcielago and Pagani’s Zonda.

Easily regarded as one of the fastest vehicles in the game, the Infernus has an all-wheel-drive which gives the car more grip.

The car accelerates smoothly but, due to its immense power, it tends to fishtail on sharp turns. The sleek design makes the Infernus one of the most aerodynamic cars in the game. A major downside is that the car catches fire after a few crashes.

For every driving fanatic out there, the Pegassi Infernus is a must-drive. The third generation of the Infernus is more refined than ever. It compensates for its low durability with its top speed and satisfies your need for speed. 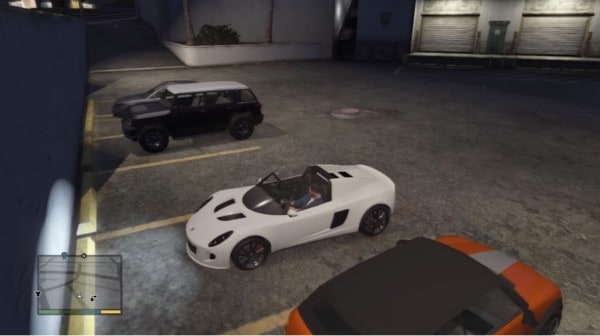 The Coil Voltic is a fusion of the Lotus Elise and the Tesla Roadster. It is a power-packed roadster and is one of the six electric cars in the game. Despite being an electric car, the Coil Voltic is surprisingly fast. The electric motors propel you forwards with a high pitch whine that is almost deafening.

The vehicle is extremely lightweight, and damage resistance is mediocre. Above that, this car has an incredible grip on the tarmac and is highly responsive. But due to its lightweight, it often loses control at high speeds.

Though the Voltic has a low top speed, its acceleration and handling give players a driving experience akin to only the best racing games of our generation. This makes the Coil Voltic one of the best cars to drive around in GTA 5.

The Z-Type has a classic sleek look that boasts a curved profile. It draws inspiration from the 1937 Bugatti Type 57 Atlantic. Even better, the car has a long snout-like front with two lamps beside a grille. To top it up, two circular lights have been added to the rear as brake lights, but the car does not have any reverse indicators.

The overpowered V12 engine is capable of reaching top speeds of over 126 mph, making this one of the fastest cars in GTA 5. The car manages to smoothly glide through moderate traffic and is fairly hassle-free to handle. However, you can notice the poor weight distribution when cornering at high speeds.

Due to its elongated front, the Z-Type is prone to spin-outs.

The V12 engine and its classic exterior make the Z-Type a must-drive in GTA5. What’s more, this car has above-average traction making it a good choice for beginners and experienced drivers alike. 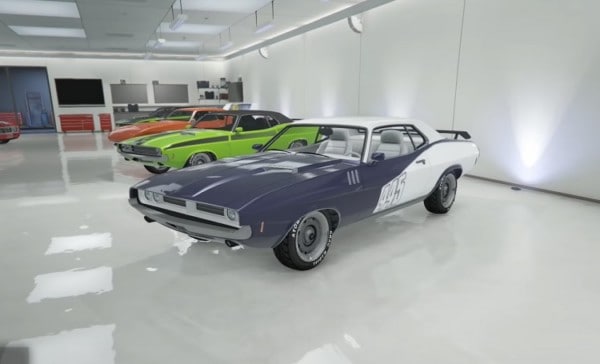 For lovers of the classic American muscle, GTA 5 has got you covered. The Gauntlet looks like a younger sibling of the 2008-2013 Dodge Challenger. The car has a traditional design with showy arches and thin vertical slits on the rear fenders.

A turbocharged engine capable of doing 0-60 in a matter of seconds lies under the Gauntlets hood. Moreover, this classic car can compete with supercars in the game and has a top speed only beaten by the Dominator.

The engine has a high revving sound and the Gauntlet features a rear-wheel drive. All this power comes at a price, as the Gauntlet has a disturbing tendency to spin out.

With its turbocharged V8, the Gauntlet is one of the few muscle cars in GTA 5 that can compete in races dominated by supercars. This heavy piece of American muscle will leave you doing burnouts and burning rubber on the fickle streets of Los Santos! 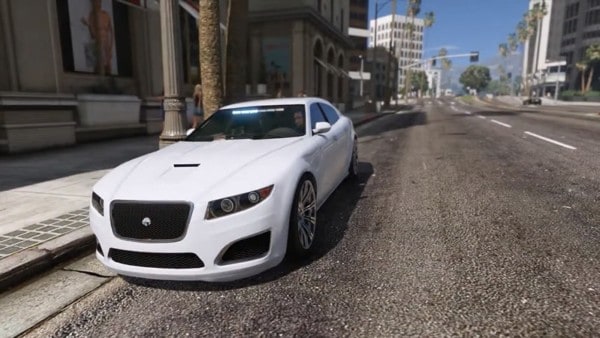 The Felon draws inspiration from the Maseratti Quattroporte, while some details are taken from the Jaguar XFR. Even more fascinating are the taillights resembling a Tesla Model S.

With average acceleration and a low-sounding engine, inexperienced drivers will feel its mediocre performance. Put an experienced driver behind the wheel, and you have a car that’s ready to get you out of sticky situations just by sheer brute force.

The engine of the car is well protected against gunfire and can withstand head-on crashes without much difficulty. Another great feature is the Felon that is equipped with a good set of brakes. Furthermore, the added weight increases grip while zooming through sharp corners in the city.

Don’t be fooled by the sound of this car. This durable car has the potential to become your go-to vehicle for heists in GTA 5. It more than compensates for the average acceleration with its top-notch handling characteristics, making the Felon a trustworthy partner in crime.

Rockstar Games have outdone themselves with the number of cars that are at the players’ disposal. Each vehicle has unique characteristics that will appeal to gamers of all classes. Whether it’s cruising down Mulholland Drive or off-roading on the slopes of Mount Chiliad, gaming enthusiasts will never run out of cars to drive in GTA 5.

Now that you know the best cars in GTA 5 are, it’s time to buckle up and take these bad boys out for a spin.

Bonus Read: All you Witcher fans, explore this review on Gwent: The Witcher Card Game.