Stellaris launched back in 2016. Paradox Interactive, the developer, is a master of 4X Strategy games and brought its genius for the genre to the hard sci-fi genre that Stellaris is set in. They weren’t content to simply let the game exist as a standalone project, however, and have been constantly updating, balancing, and refreshing their grand strategy epic in unique and compelling ways. Four years later and there is so much content available, we thought it was time to dive in and put together a comprehensive Stellaris DLC guide. 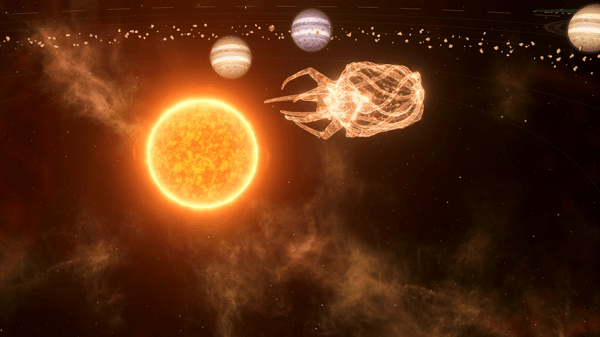 The first expansion in our Stellaris DLC guide is giant…literally! Leviathans add several space-bound entities known as Guardians that exist in special locations throughout the galaxy. Defeating these creatures grants your empire technology that is otherwise inaccessible.

Defeating the Ether Drake, for instance, grants you the ability to research the ultra-powerful Dragonscale Armor, which you can equip on your spaceships. Different Guardians reward different upgrades, though depending on your playstyle, not all of them will be valuable.

Leviathans also adds the War in Heaven storyline. The story features two ancient empires who begin to fight again after eons of peace. You’re tasked with siding with one of the factions or waging war against them both as tensions escalate.

This pack of new content also includes a variety of new species portraits, music, and several events and encounters for you to discover as you grow the influence of your empire. 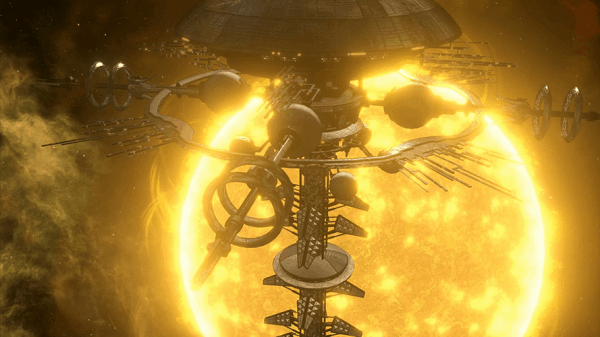 When it launched, Utopia was the largest update to Stellaris. Paradox added a huge number of features to the game that fundamentally changed how you could play.

Additions like Megastructures and Habitat Stations increase the types of structures you can add to your empire. Each provides a variety of perks that are exclusive to these extremely high-cost constructions.

In addition to all of that, the ability to indoctrinate primitive civilizations into your particular brand of ethics allows you whole new ways to conquer the galaxy. Or, you can take advantage of the Advanced Slavery mechanics if you want to play a truly evil game. 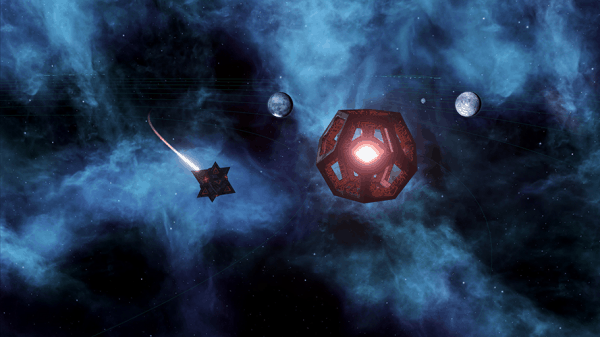 The third entry in our Stellaris DLC guide, Synthetic Dawn adds the ability to build a civilization made up entirely of robots. The mechanics that come with leading an empire of synthetic life completely change how you approach playing Stellaris. The robot species you govern has different requirements and perks than any of the other living beings in the game.

Additionally, several new event chains help you grow your synthetic empire to be the greatest in the galaxy. Along the way, you’ll have to deal with synths rebelling against their masters and ancient discoveries of fallen civilizations.

There are a bunch of extra features that come with the package as well, including new voice packs and race portraits. 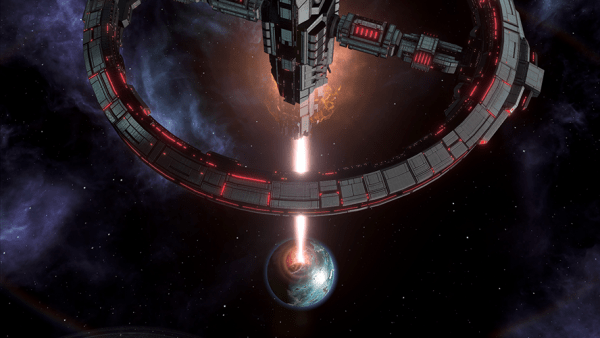 Up to the release of Apocalypse, one of the things many players wanted to do, but could not, was destroy a planet. With the addition of Colossus weapons, you can make your dream of becoming an evil galactic emperor a reality. Colussus weapons are massive structures capable of destroying entire planets and completely changing the makeup of the galaxy.

You’ll need a massive army to combat weapons capable of destroying whole worlds, so it’s a good thing Paradox included the new Titan class capital ships. These massive space vessels are insanely expensive to build, but once one is out and about patrolling your empire, enemies will think twice about picking a fight with you.

Apocalypse doesn’t stop there. Pirates and marauders now patrol space. These nomadic bands of raiders live at the fringes of the galaxy, and it’s up to you whether you want to take them out or recruit them to help you fight your own battles.

In a less physically violent turn, this Stellaris expansion also adds several new Ascension Perks, Civics, and Unity Ambitions. With these governmental and diplomatic skills, you have whole new ways to influence and control the citizens of your empire. 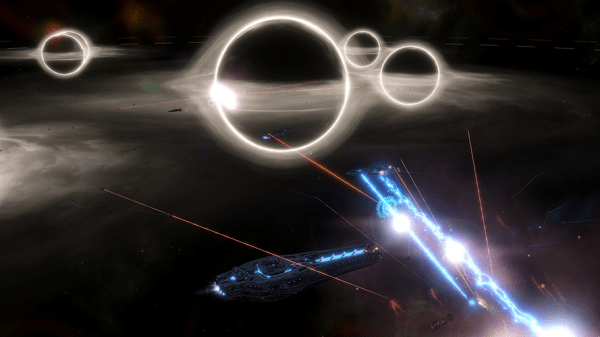 The Distant Stars expansion includes a slew of unique pieces of content that really expands the scope of the galaxy. One of the additions is an ancient gateway to a location that sits outside of the galaxy. However, what you find on the other side has a massive impact on your empire at home.

Throughout the galaxy, several new anomalies, events, and uniquely spawning solar systems are discoverable. Each of these new pieces of explorable locations adds a little more depth to the world of Stellaris, as well as perks, technologies, and opportunities to expand your rule.

Similar to Leviathans, Distant Stars comes with several more gargantuan space creatures for you to discover. Some are peaceful, but you won’t know until you make first contact. Approach with caution! 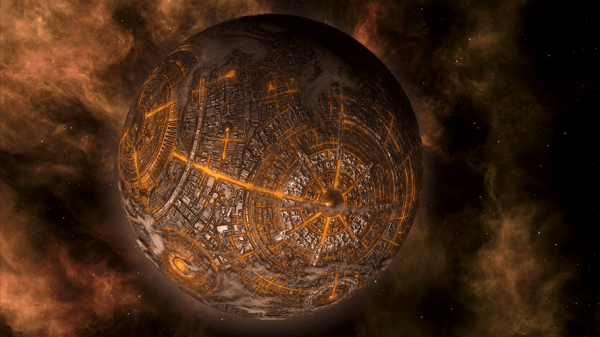 Paradox really outdid themselves with the MegaCorp expansion. It is quite frankly, mega. This enormous new DLC pack comes with the ability to build a truly unique Corporate Empire, where you take on the role of the CEO of a galaxy-spanning corporation. MegaCorp is one of our favorite expansions included in our Stellaris DLC guide.

MegaCorps have unique governing methodologies that are not available to any other government type in the game. Your corporate government will have access to the special habitable planet known as Ecumenopolis. With this world as your capital, you can increase its population density well beyond any other planet in the game, creating a planetwide megalopolis not seen anywhere else in the galaxy.

As you expand the borders of your MegaCorp, you’ll encounter Caravaneers. These wandering tradespeople offer unique goods and services for a price. You’ll also be able to track down their homeworlds as you progress through the content.

New Megastructures feature prominently in this collection of content as well. Massive art installations, a coordination center, and an interstellar assembly are just some of the planet-sized creations available to construct.

Finally, this huge update comes with a new Galactic Slave Market which gives you the power to buy and sell Pops in a truly ruthless fashion. 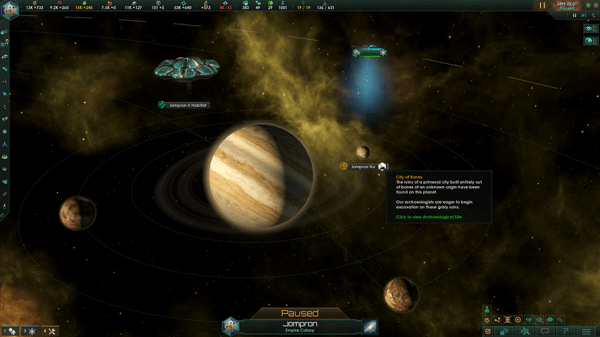 Archeology and ancient civilizations are the centerpieces of this DLC Story Pack. Ancient Relics is filled with new planets to discover and excavate. A wide selection of relics and artifacts grants your empire a new set of powers and technologies.

As you explore the story of the game, you’ll learn about the Baol, an ancient hivemind race, and the Zroni, a race of immensely powerful psionics. As you follow the storyline and dive deeper into the history of these mysterious beings you’ll unlock incredible abilities. In the process, you’ll also uncover the truth behind what led to their downfall.

Special Relic Worlds populate the galaxy now. Each has a guaranteed archeological site where you will discover a wide range of ancient technology. Through this technology, you’ll be able to make Minor Artifacts. This new type of consumable resource grants all kinds of powers for you to exploit. 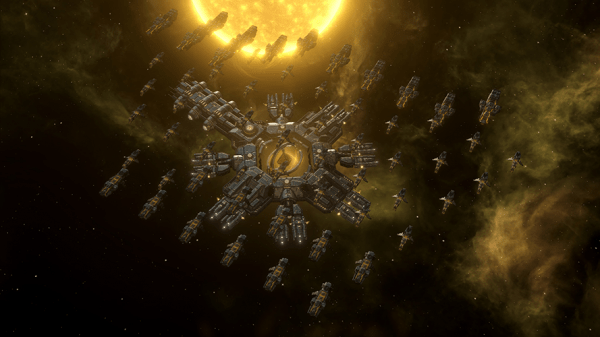 The most current release of new content included in our Stellaris DLC guide features an interesting change from past content packs. Federations focuses mostly on new types of political intrigue and diplomacy. The goal of these political technologies is to allow you to win wars and gain influence for your domain without having to fire a single missile or equip any shields to your ships.

While you build your Federation, you also have the ability to create and join the Galactic Senate. This governing body looks over the entire galaxy and is ripe for abuse. Use your power and influence to manipulate your political rivals and gather power in your favor.

Federations also comes with several new Megastructures like the Mega Shipyard, and giant vessels like the Juggernaut which allow you to truly throw your political and military weight around. With this latest expansion, the galaxy is yours for the taking, whether you do it on a battlefield or in the chambers of the Galactic Senate.

Even four years after its initial launch, Stellaris is still alive and well. Paradox Interactive’s continued support of this epic grand strategy masterpiece makes the galaxy you play in feel more like a living breathing place, rather than the simulated world of a video game.

While not everyone has the time or money to commit to every piece of DLC available for the game, if you’re looking to expand the borders of your galaxy, Stellaris has some form of content for you. From fighting ancient space monsters to passing resolutions to sanction those who would defy your galactic authority, Stellaris has plenty of DLC that you will find compelling.

What are you waiting for? With our Stellaris DLC guide in your hands, you’ll know exactly which content is right for you. Head over to Steam or Paradox’s own store to pick and choose how you want to grow your empire’s footprint in Stellaris!