Have you ever wanted to live the life of a pirate? Craving to sail through raging storms and encounter mystical creatures?

Well, Sea of Thieves is a PC game that lets players do all that and so much more!

Developed by Rare and published by Microsoft, Sea of Thieves is a first-person action-adventure. The game is also a multiplayer that allows pirates to team up with each other to complete voyages. Furthermore, players can choose to battle it out with other ships, boarding them for extra loot.

The game also boasts aesthetic enhancements which come in the form of curses. While these curses do not have any in-game benefits, they change the appearance of the character. Thus, allowing players to show off their exploits in style.

Obtaining Curses in Sea Of Thieves

Sounds cool, doesn’t it? But, these fancy props don’t come easy. Pirates are talking about curses like hot potatoes mainly due to their rarity. Above all, knowing where to look, putting in the extra hours, and staying committed till the end will guarantee that you have all four curses in your chest.

To amass the coveted curses, players must go on multiple voyages completing the tell tales. These tales contain a plethora of missions sinking pirates for hours on end.

With that being said, let’s dive in and take a detailed look at how we can obtain all four curses in Sea Of Thieves.

Bonus Read: Annoyed by the open mic in Warzone? Take a look at this guide to mute players in Call of Duty. 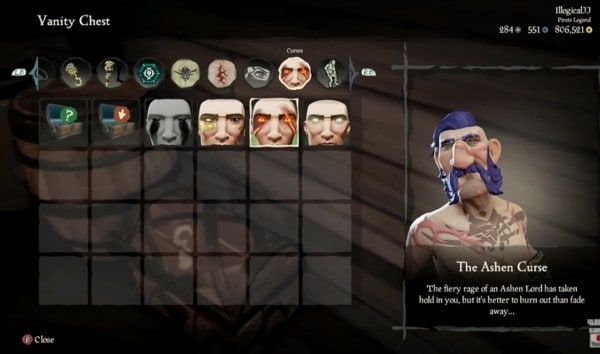 One of the easiest curses to obtain in Sea of Thieves is the ashen curse. It makes the avatar radiate from within, especially around the chest and hands. Additionally, it also makes certain scars on the head glow.

Here is the process to obtain the ashen curse in Sea of Thieves.

There you have it! After completing this tall tale, players will be able to advertise their hard-earned curse in Sea of Thieves.

2. Curse Of The Order 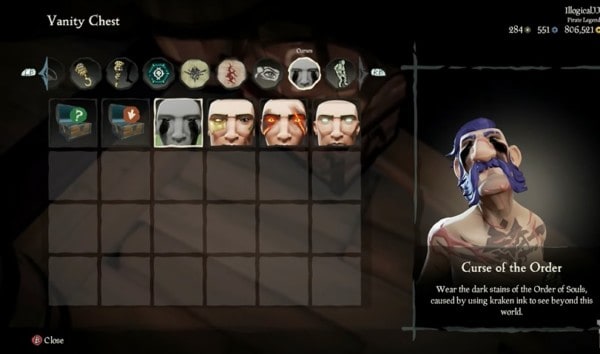 Want your avatar to have glowing black orbs for your eyes? How about pitch-black paint gracing their cheeks? Let’s take a look at how we can obtain this curse and enhance our character’s appearance.

At the end of this walkthrough, players will have secured the curse of the order. Follow the steps mentioned below:

Bonus Read: Take down your opponents with ease and aplomb. Learn how to aim better in Warzone!

3. The Shores Of Gold Curse 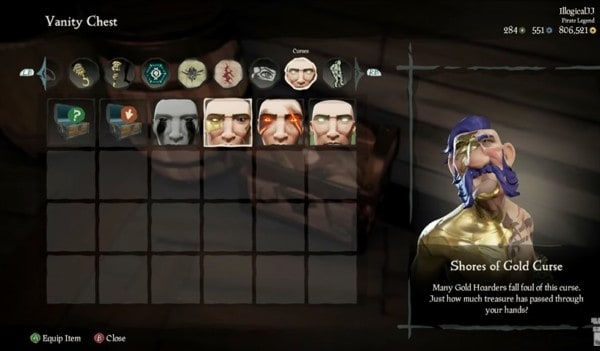 To unlock this curse in your vanity chest, players will have to complete the shores of gold tale. Coincidently, this tale is the final voyage in the main story arc of the game. Additionally, this curse is the most troublesome curse to get your hands on in the entire game.

Let’s take a look at the perquisites to obtaining this curse.

While this curse will take pirates the longest to achieve, the gold splashed on the avatar’s body makes the whole look complete.

And are you even a pirate in Sea of Thieves if you aren’t flashing a little gold?

By the time players get to obtain this curse, they would have already tamed the ocean in Sea of Thieves. Equipping pirates with blue eyes like Poseidon, this effect is easily noticed by other players in the game.

Additionally, shirtless avatars will also receive a radiating skull on their chest. Also, pirates donning this curse will send a bold message across the seas that they are not to be trifled with.

Let’s take a look at how we can obtain the final curse in Sea of Thieves.

To procure the pirate legend curse, players will have to increase the reputation of their companies. Moreover, the reputation requirement for this curse is exceptionally high, requiring players to attain legendary status with at least three major companies.

This means that players will have to gain fifty levels with any three of the following companies in Sea of Thieves.

By achieving a legendary reputation for any of the three mentioned companies, pirates will unlock this legendary curse in their vanity chest. Thus, they’ll be conquering the seas and obtaining all curses in Sea of Thieves.

The journey to obtaining all curses is a long and arduous one. However, players embarking on this grand voyage are sure to be rewarded with the finest visual effects in Sea of Thieves.

Stand out in a crowd of dull captains by advertising your newly acquired curses. Pull up your anchor, un-mast the sails, and let the wind carry you and your ship towards your desires in Sea of Thieves!

Bonus Read: Knock beans down and win all your races with the help of this beginner’s guide to Fall Guys!