As the ruler of an empire, it’s important that you have the complete loyalty of your people. One of the critical aspects of this is the religion your citizens share. Sometimes, there is an advantage to changing your nation’s religion. However, there are tons of variables at play that control that shift. It’s no easy task to convert your population. That’s why we wanted to answer the question of in CK2, how do you change religion?

You can convert individual characters within the game to one religion or another through a variety of means. The most straight forward of course is to demand conversion of one of your vassals or other underlings. However, keep in mind that there are several requirements before a demand will be met.

Some societies like nomads and unreformed pagans cannot make conversion demands. Also, you must be at peace with the vassal you’re demanding convert. Vassals can’t be “True Believers,” as they are incapable of responding to a religious conversion demand. Prisoners will convert if you agree to their release, but children and religious leaders will never convert.

Keep in mind, that even after conversion, characters might still hold on to their previous faith as a secret religion, which could cause problems in the event that heresy begins to spread. It’s definitely something to watch out for. 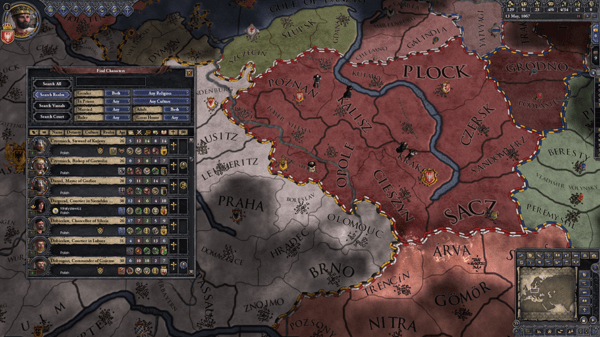 For changes to entire provinces, your main strategy will be to rely heavily on your Court Chaplain. As a spiritual leader, they are responsible for many things, not least of which is proselytizing the faith in your kingdom and beyond. They do this by embarking on Proselytize missions.

Additionally, if certain conditions are met, you can take on a Prosperity event which allows you to fix a province’s culture for 100% of its yearly income. The region must be your crown focus province, and the event is more likely to occur with high stewardship and learning skills.

As mentioned already, your Court Chaplain is instrumental in converting the peoples of the realm to your religion. So making sure your Chaplain is as skilled is possible is an absolute must.

Additionally, Keep your moral authority as high as possible. The higher your authority, the more successful your Chaplain will be. Keep this trait high by declaring and winning holy wars and crusades, preventing the sacking of your temples, and keeping your holy sites controlled by members of your faith.

One final note: Watch out for secret religions! If you let these go unchecked for too long, it will invite heresies to spread, which will cause a great deal of long-term religious strife. Squash dissidents as soon as you can.

If you’ve ever wondered about in CK2, how do you change religion, now you know! It’s not something that occurs at the press of a button, but with a little effort, you can make even the most stalwart pagan take a knee to your faith. While you’re spreading religion across the world, why not check out some of our other guides on Crusader Kings II.