In the 2.3 version update of Stellaris how to create sectors updated dramatically. The purpose of sectors remained the same, but where players set them up moved. We explain where this important mechanic lives now in the complex set of menus and UI that makes up much of Stellaris.

Sectors are regions of your empire governed by a central system. The influence of a capital planet extends four hyperlanes away, at which point the boundary of the sector ends. When you start a game, your homeworld acts as the capital of your first sector. As you expand the borders of your Empire, though, you will absolutely need to designate more sectors. This will help govern your growing dominion.

One of the most practical advantages of having sectors is the ability to give them a sector focus. By setting a focus, a sector will start to develop automatically. You won’t need to manage every aspect of its growth. As your Empire expands, the ability for sectors to self-manage will be a valuable asset. After all, the last thing you need while fighting an interstellar war is to worry about a settlement of your empire on the outer edge of your borders.

Stellaris: How to Create Sectors 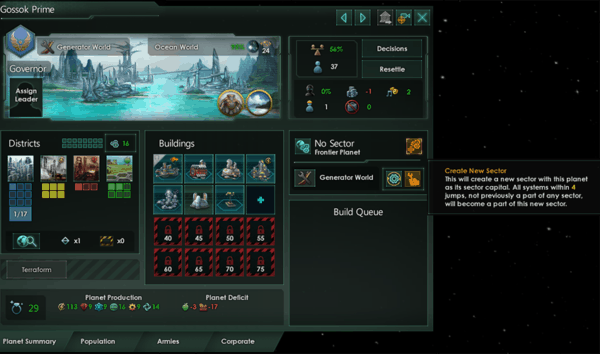 As mentioned, the version 2.3 update of Stellaris fundamentally reworked this mechanic. Starting with this update, sector management moved to the planet window of each stellar body capable of becoming a capital.

To make a new sector, navigate your galaxy view to a planet that you’d like to give the capital status to. Ideally, it’s a planet far enough away from another sector to maximize its boundaries. It should still remain within reach of your Empire’s borders.

Once you’ve settled on a suitable capital, open that planet’s menu. There, you’ll see the Create Sector button. By pressing this button, you designate a planet as a sector capital. Then the game automatically draws the sector boundaries based on the hyperlanes; up to four away.

A few things to keep in mind about your new sector. Any planets already in a sector will not join the new one being created. If it’s important to you that a planet join a particular sector, you’ll have to disband the one it belongs to first. Also, you can change the capital by using this button once a sector has been created.

Sectors Studied: What Next?

You’ve got sectors nailed, but there’s so much more to master in Stellaris.

With the confusion of how to create sectors solved, make sure to check out some of our other guides on Stellaris!