Fast-paced, high tempo, and explosive battles make hyper scape entertaining and addictive to play. The hype behind Hyper Scape has dwindled a little, but it still is an enticing FPS (first-person shooter) game to play with your friends.

One hundred players duke it out in Neo Arcadia, and the main objective is to be the last one standing. In this battle royale, random areas start disappearing, forcing players to eliminate each other till the finale section remains. The first team to grab onto the crown for 60 seconds is announced the winner.

Or, if you’re sensing blooming confidence within yourself, conquer by eliminating all opponents!

As mentioned before, Hyper Scape is fast-paced and forces you to fight one battle after another. The key to winning is to use your weapons and abilities to their full potential, whether to escape or gain the upper hand in the fights you choose to take.

9 Amazing Hyper Scape Characters You Can Use

This online game is futuristic and has top-notch graphics. There are characters you choose to make yourself look unique and different from others. Each character is different in their own way and has a backstory as well.

Whether you like characters with flashy looks or the ones that prefer to stay hidden in the shadows, here are nine eye-catching characters you can choose in Hyper Scape: 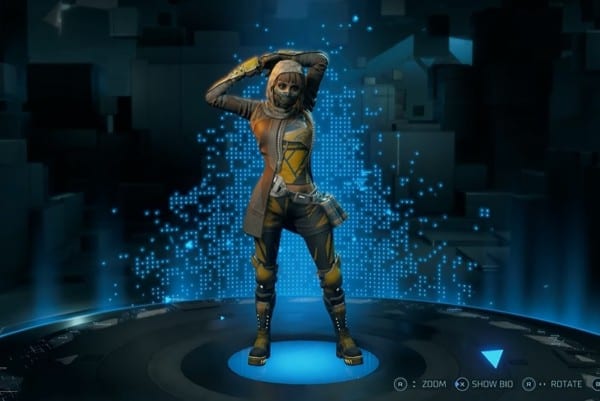 The skeleton face mask combined with a green hood makes Javi one of the best-looking Hyper Scape characters. She sports flashy colors like yellow and red, making her stand out from the rest of the crowd. Additionally, champion skins of Javi can be brought in-game for a limited time.

Javi plays the Hyper Scape Crown games to raise awareness about climate change with the group Tree Speakers. She originates from the border zone of San Francisco/Tijuana. In short, she is a badass and has a fearless personality, which might suit you if you like going for crushing wins in-game. 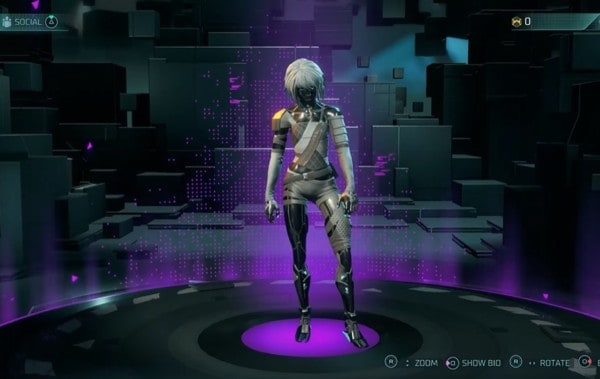 A deadly assassin who also happens to be an android, doesn’t it sound cool?

If it does, then Rook should definitely be your Hyper Scape character choice!

Not much is known about Rook’s past in-game, which adds more to her curious and mysterious nature. Various Rook skins can be brought through the battle pass or the game store, keeping you interested in the character. 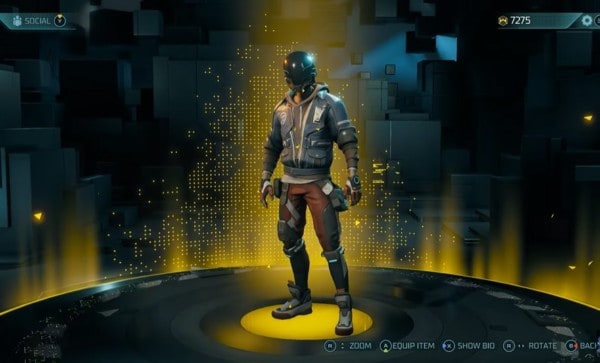 The poster boy of Hyper Scape, Ace, wears jeans and a jacket ready for a casual day out. He is easily recognized by his motorcycle helmet.

Ace comes from a humble background, but his family struggles to make ends meet. Therefore, he plays the crown games to provide for his family.

A genuine guy with a sporty look, Ace could be your Hyper Scape character to play.

Bonus Read: Warzone freak in the house? Find out the six best operator skins in Warzone! 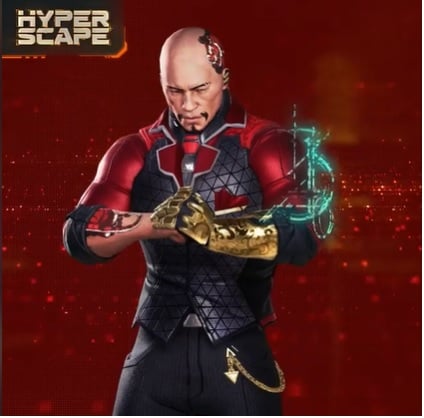 Mister Red is a member of the Red Tiger Yakuza. Enough said!

Jokes aside, he looks menacing, sporting a bald look with a dragon tattoo on his head. The black and red suit looks neat, and bonus points for matching the tattoo color with his clothing.

He is a bodyguard for the Yakuza family and lost his arm while protecting them. As a reward, he was given an artificial arm.

A strong character who’s a follower of ultraviolence and aggressive behavior, he’s also faithful and part of the Yakuza. If this doesn’t convince you to use the character, we don’t know what will.

Hank Mills’s character looks like a mix of a Stormtrooper and Revenant from Apex Legends, with a straightforward appearance and personality. Moreover, his suit is a mixture of black and white, which can’t possibly go wrong.

The red mask and white helmet look fantastic in combination and intimidate the better half of the softer-looking characters in Hyper Scape. 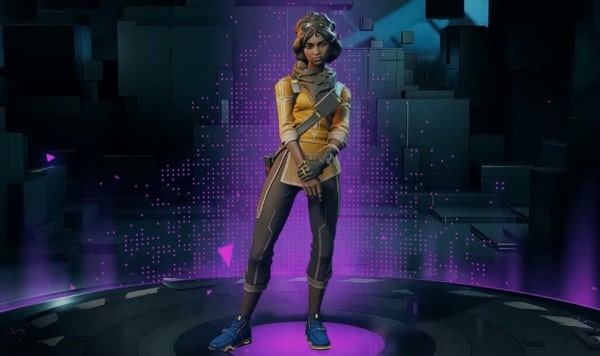 Nahari is a journalist, giving her quite the knowledge about the games. Her character design is plain yet quite intriguing to look at. What’s more, her main feature is the googles with her hair tied on top.

Remember, she’s quite reminiscent of an engineer in various games like Lifeline in Apex Legends or Team Fortress 2.

Her clothes consist of a yellow-colored shirt and a pair of jeans. Simple yet unique, she is an underrated Hyper Scape character any gamer should attempt using. 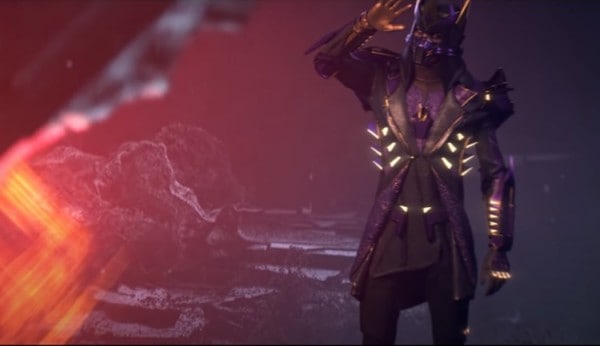 Basilisk is a great character that we think has an underground fanbase somewhere. Besides wearing a jacket and face mask, the black and purple scheme on them combine pretty well. Above that, his personality has white hair and sharp yellow eyes, giving him a sleek style every gamer wants on their character.

Basilisk aspires to be a professional gamer, and his Hyper Scape character shows that, with his rogue skin being one of the favorites amongst the gaming community.

This character looks really similar (*cough* Assassin’s Creed *cough*) but, we’re not complaining! Being an outsider with no known information about him in-game, he radiates mysteriousness by disappearing and appearing randomly, just like an assassin.

Even better, the white cloak looks perfect, with the bits covering his face being the cherry on top. If you like Assassin’s Creed or their main character, you should pick this personality without a second thought.

Bonus read: All you Destiny 2 lovers in the gaming community, we’ve got a list of the nine best Titan subclasses in Destiny 2. 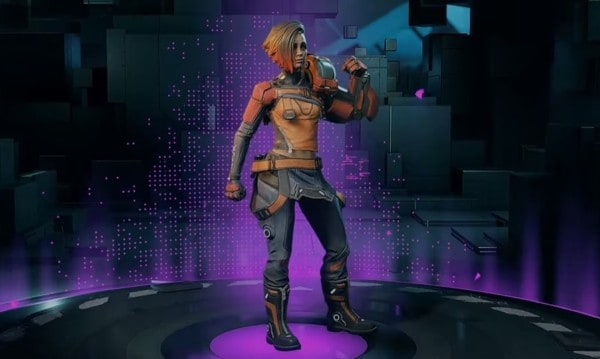 Rocking red on her hair and clothes, Mint will remind you of a rebellious teen who doesn’t listen to her parents. Her strong and independent personality is what will attract most people towards the character.

Let’s not forget, she also has a massive mechanical arm, making her stand out from the rest and giving her a future-like look of a half-robot half-human.

She is responsible for the black market seen in-game, working with clients to help them gain advantages to win the crown game. In addition to that, her background story comes with revelations that will unveil secrets about playing Hyper Scape.

Each character is unique, and the only trouble you will face is choosing which one you want to use in-game. Most of them are available by casually playing the game, but some character skins can be gained for a limited time. Thus, be patient if you’re looking for developments in character cosmetics and personalities.

Note: Use any character you want, as no one has a competitive advantage over others.

However, if you want to gain competitive advantages over others, try the tips below to implement Hyper Scape hacks to win games.

Hyper Scape has abilities known as hacks, and no, they aren’t actual hacks, and using them won’t get you banned in-game! So don’t hesitate to attempt.

Moreover, they are all over the map in different shapes and sizes. The key to winning these games is using these hacks, which augment gunfights and general fights you indulge in.

Hacks can be used to reach higher spots, fly in the sky, pull enemies close or push them far away, and these are only some of the hacks you can use. Even better, you can use two hacks simultaneously! Each of them can be upgraded to reduce the cooldown on these hacks. Remember, the more upgraded hacks are, the more frequently you can use them.

We all dreamed of becoming invisible as a child. It turns out it’s a pretty useful hack for winning games in Hyper Scape!

When you turn invisible, you can’t use any weapons, yet this hack can be crucial for your survival in battles.

Invisibility is an epic technique to escape battles when you’re plummeting on health, taking cover or healing. Another good news is that if you max out invisibility, it’s replenished every seven seconds. Such hacks play a crucial role in the endgame, as it’s imperative to secure the crown.

Remember, being invisible doesn’t make you invincible, so refrain from performing it before the enemy. Otherwise, they will shoot you, and you will be visible again, making you an easy target to kill.

Teleportation helps go from one spot to another in Neo Arcadia. It’s a brilliant way to confuse your enemies and leave them making faulty predictions on your whereabouts. Although this hack is a gift for snipers, Hyper Scape usually favors close combat because of the high-paced movement in the game.

Regardless, it still helps to avoid running in the open where enemies could be waiting. Not to forget, ensure to execute a teleport during the endgame where players chase you to grab the crown.

Try using the ability creatively since it gives you the edge you need to win your battles. For instance, you can catch up quicker against your enemies while chasing them.

Bonus Read: Learn how to download Valorant on the PC in 7 easy steps.

Having troubles finding cover in-game? Making a massive wall for yourself is the way to go! The wall hack blocks projectiles and enemies and proves instrumental in climbing spots you otherwise wouldn’t be able to access.

Though it’s evidently noticeable, this hack is the go-to solution to evade challenging situations or raging gunfire. Even better, it completely blocks off enemies in close areas, forcing them to take a different route.

And if an enemy sniper is harassing you from an undetectable spot? Wall it up!

There’s no better feeling than winning a hard-fought battle, but there could be another squad right around the corner looking for easy kills. In such situations, you need to heal up quickly, making the heal hack insanely handy.

While you can heal automatically after a certain amount of time in Hyper Scape, there are situations where there is no time for a break. With this hack, not only can you heal yourself, but your teammates too.

For gamers who believe in harmony within a team, this is a win situation!

Need your personal space in the game? The hack shockwave is a space creator of the first order!

Shockwave forces your enemies away from close range with a powerful push to send them far away while also dealing damage.

Not only can it give you space, but it’s a first-class mobility hack to use offensively and defensively. Above that, it’s useful for snipers to gain that perfect angle to blow your enemy’s head away.

With the fresh revelation of how space is a critical factor in battle royale games, you’ll be introduced to a whole new perspective on playing Hyper Scape.

Want to initiate a fight in the most dashing way possible? How about making your entrance like Iron Man in the movies? Well, with Slam, you’ll be yelling a statement for your opponents.

Slam propels you high up into the air, and you slam your way down in full force.

Want to imitate Hulk? Simply go slam nearby clashing opponents and disrupt the equality in a close-range battle. With the slam hack, you can even clear areas and take the high ground.

Pro Tip: If you slide as soon as slamming into the ground, you can get into battle instantly, giving you the edge you need on your opponents!

Bonus Read: Do you want to win in Fall Guys? Here are ten easy tips and tricks.

To sum it up, use hacks to gain an advantage over your opponents, which will help you win more battles and games in Hyper Scape. Furthermore, choose amongst our nine favorite characters and deck up your personality in Hyper Scape!

In the case of hacks, don’t expect instant results. These hacks can only be used effectively by practicing and repeatedly using them in-game.

Go on, conquer that crown!