One of the best first-person shooter titles to come out this year, Valorant is a 5V5 tactical shooter developed by Riot Games. Launched initially as a beta version, players could only gain access to the game by watching Twitch streams to get a Valorant key.

Despite this contingency, a key wasn’t guaranteed. But, Valorant gained the attention of a plethora of shooting enthusiasts who simply wanted to be a part of the action.

Although it is released only on the PC platform, Valorant has hugely impacted the gaming community. Above all, this fast-paced shooter is a worthy challenger to the tactical shooter crown held by CSGO for many years.

Bonus Read: Does your Apex Legends crash on PC? We’ve got the fix for you!

How To Download Valorant On PC In 7 Simple Steps 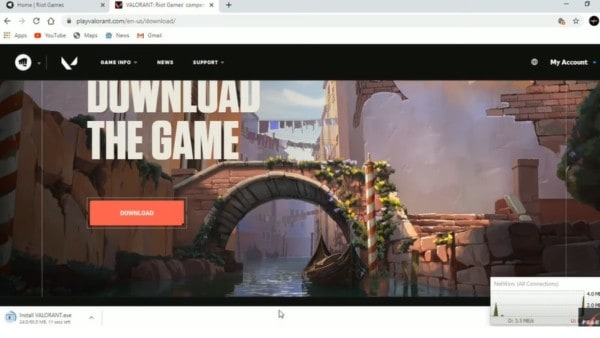 Valorant is a free-to-play shooter available only on the PC. Players who have played older titles released by Riot Games like League Of Legends or Runeterra will already have a Riot account.

However, gamers who are new to Riot Games will be required to create a Riot account before they can download Valorant on their PC.

Let’s take a look at seven easy steps to download Valorant on the PC:

You’ve done it! You will now be guided through the install process and will finally have Valorant on your PC. Remember, during the process, your computer may restart several times.

Players will also be prompted to download Vanguard, which is Valorant’s anti-cheat client similar to easy anti-cheat in Apex Legends. If you’ve followed these simple steps, you now have Valorant on your PC.

Let’s take a look at all of the maps in Valorant that will give players a better grasp of the game. Some of these maps may have to be downloaded or updated based on map modifications by the developers.

Bonus Read: Tired of playing with bots in CSGO? Take a look at this short guide to help you disable bots in CSGO.

With the latest addition of Fracture, this tactical shooter now has seven maps to boot at the moment. The sole objective is planting or defending against an in-game bomb called a ‘spike.’

There is also a shooting range in Valorant where players can hone their skills by practicing simulations. Players can also compete to grab two ultimate orbs that are placed on the map in neutral locations.

These orbs grant one point towards the ultimate ability of the agent who picks up the orb.

Let’s take a quick look at the maps in Valorant and some points of interest to give players the upper hand over their opponents.

Note: If any of the action or features we’ve mentioned below seem to be missing, consider a quick map update or redownload.

This is the latest map that has been added to Valorant. The map is a secret research facility that was torn apart in an explosion. As a result, it’s divided into many parts providing various options for defenders as well as attackers.

Although the layout of the map can be intimidating, it is relatively easy to get a grasp of the map. Unlike large maps like Breeze and Haven, Fracture is smaller, allowing players to engage in close combat.

Above all, Fracture is filled with tight spaces that provide an abundance of cover and angles, putting gamers in short to medium-range gunfights. The intricate design traps the defending players in the middle while allowing the attackers to spawn on both sides of the map.

Simultaneously, two zip lines run across the middle of Fracture, connecting the two Attacker spawn sites. These zip lines allow attackers to be erratic and give the defending team a really tough time.

Although Fracture heavily favors the attacking team, defenders must batten down the hatches and watch their flanks if they want to conquer victory in Valorant.

While Fracture was the latest map added to the game, Ascent was the first map in Valorant. This map is heavily designed after the Piazza San Marco in Venice, Italy, and boasts lush greenery sprinkled all over.

Since the battlefield is divided into two parts, players wanting to gain control of this region will have a tough time due to the ample open space in the center.

The fixed entry points to the bomb sites and the long, tight angles usually guarded by opponent marksmen demand players to work as a team to win on this map in Valorant. Similarly, defenders using smokes and walls are bound to slow down the attacking team drastically.

Since retaking a bomb site on Ascent is an arduous task, defenders can force the attacking team to use their utility items. Therefore, giving the defending team a chance to eliminate the opponents almost effortlessly.

Set in Shibuya, Japan, this map is literally split up by elevated structures in the center. While the architecture is a delicate blend between the future and old traditions drenched in a neon pallet, Split is dense with multiple layers.

The two bomb sites are placed in far corners on either side of the map with a middle ground that will bring success to those brave enough to control it. A unique feature of the map is that it allows players to rapidly ascend and descend the elevated center with the help of two rope ascenders.

Most importantly, players who find themselves in an unfortunate situation on the bomb sites can use the sewers, rafters, and vents to escape their fate.

Gamers playing in Split on Valorant should note that there are two orbs present. Both the orbs are located in A main and B main, respectively.

Set in Morocco, this map is Valorant’s response to the fan-favorite Dust 2 in CSGO. Bind is a perfectly balanced map with four long lanes that lead to two bombsites. Another exciting feature of the map is the two one-way teleporters.

Consequently, these teleporters can be used by the attacking or defending team to switch positions and flank the opposing team quickly. However, the teleporter sounds like a jet engine and is loud enough to alert the enemy when in use.

Players can also throw projectiles, drones, and guns through the teleports to confuse the enemy. Bind also has two ultimate orbs, which can be found in the showers and on the beach by the teleporter. Players can use these orbs to gain ability points.

Although the tight spots in specific lanes and the freedom to linger around the teleporters don’t prove advantageous to either team, players using the correct agents can turn the tide of the game.

This colorful map is set in a monastery in Bhutan and is one of the most peaceful maps to explore in Valorant. Unlike other maps in the game with two bomb sites, Haven features three bomb sites making attacking and defending a tedious task.

Players are forced to spread their resources cautiously as they try to cover the entire map. The defensive players will have to quickly find the best way to defend the sites or risk getting overrun by the attacking team.

On the other hand, due to the large map size, attacking and defending can consume a lot of time. And as a result, communicating efficiently with your team and rotating quickly is essential to winning on Haven.

Similar to other maps, taking control of the mid-ground is even more crucial in Haven whether you’re attacking or defending. Controlling the midpoint allows players to pick off the enemies one by one as they approach from either side.

Breeze is set on an island location, but don’t let the tropical vibes fool you! This map is a hunting ground for long-range players due to its size and open grounds. The map is filled with wide, open spaces that demand attackers and defenders alike to be highly vigilant.

As a result, communication is the key to surviving on this Caribbean island. Whether you’re preparing for an ambush at a bomb site or looking through a scope perched at a vantage point, danger is just around the corner when playing Breeze.

To add to the mess, the map features multiple entry points to both bomb sites making attacking and defending more complicating than other maps in the game.

Players should ideally choose rapid agents to fight on Breeze, but they’ll definitely need the support from a healing teammate to keep them in the game.

One of the narrowest maps in Valorant, the layout of Icebox is inspired by Bennet Island in Russia. Although the map is filled with tight corridors and barely any open space, Icebox compensates for its width with verticality.

The key to winning this map is securing angles on different heights while attacking and defending. Players will also notice the verticality when they have to plant the bombs in the bomb site.

Unlike other maps, the bomb site in Icebox is two-tiered, giving players the chance to plant their spike on the lower or higher ground depending on the situation. As a result, Icebox is best suited for agents like Raze, Jett, and Omen, who are capable of gliding through the map in a hassle-free manner.

These agents are suitable for both teams, so players must be vigilant and avoid opponents waiting to ambush them in dark corners.

Currently, there are seven maps in Valorant, and Riot Games is working on adding more maps to the game with every update. Hopefully, learning about these maps and their unique features will help players slay their enemies and up their Valorant ranks.

Now that you’ve downloaded Valorant and have some knowledge about the maps, it’s time to dive into the chaos and annihilate your foes.

Bonus Read: Read our guide on how to chat in Valorant to ensure efficient communication between your team for an enhanced experience.