If you want to win a war in Stellaris, there are several vital steps you must take to ensure victory, and there are consequences that you must keep in mind. Warfare is a vital part of the process of building a massive galactic empire. Understanding the rules of engagement can make the difference between victory and defeat.

Success in war is determined by far more than your ability to declare a conflict of a particular type. You need to understand that the only way to bring an engagement to an end and claim your rewards includes a ground invasion. Forgetting that can leave you in a state of permanent warfare, your wargoals never fulfilled.

As you can see, war is a complicated affair. If you want to win a war in Stellaris, follow our guide. With its help, you’ll be in the perfect position to bring your foes to heel and build an empire that lasts for eons.

Since the massive update that bumped the version number of Stellaris above 2, the nature of how you declare war has changed. Prior to the most recent update, you could attack whatever opposing empire you liked.

However, war has changed (or at least how you declare it has). To declare war in Stellaris now, you must have a Casus Belli. Casus Belli is Latin for “a provocation of war,” and it’s what allows you to click that all-important “Declare War” button.

There are several varieties of Casus Belli. They range from claiming a territory as your own to humiliating your opponents. The types of Casus Belli you have access to are dependent on a lot of factors including how you govern your empire.

Things like your governmental make-up and War Philosophy policy impact which Casus Belli you can pursue and how your empire will end a war.  Regardless of your political ideologies though, if you want to, you can find a way to declare war on your opponents. That’s assuming you’re not playing as a Fanatic Pacifist government, of course.

As an example, to start a war using the concept of a Claim, you must go to a territory near the boundaries of your empire and claim it as your own. Claiming a territory costs Influence, and assuming you have enough, you will then be able to declare war based on that claim.

Wargoals determine the victory or loss conditions of a war. It’s critical to understand exactly what the ramifications of your war will be once you declare it. Winning a war of Animosity, where the Wargoal is humiliation, results in 100 Influence for the victor, and to the loser a loss of all Influence and a 33% happiness cost for a decade. Ensure that you’re willing to bear the cost of a loss once you wage a war because the consequences are very high.

There’s more than one way to wage a war. You need to have a good grasp of all your options if you want to come out victorious.

Once you engage in battle with an enemy, there are in general three phases to battle. The first phase and arguably the most important is space warfare. Most of your battles will take place in space, so it’s critical you have a fleet of battleships ready to do the heavy lifting.

Space battles are important when claiming territories (which most wars are about). It’s impossible to claim a territory unless you meet several factors first. Before attempting to start a ground invasion, you need to take over any Starbases located within the system. Your fleet will be critical to making this happen.

Once you’ve got a foothold in a particular system, then you can move on to the next phase of claiming a territory. 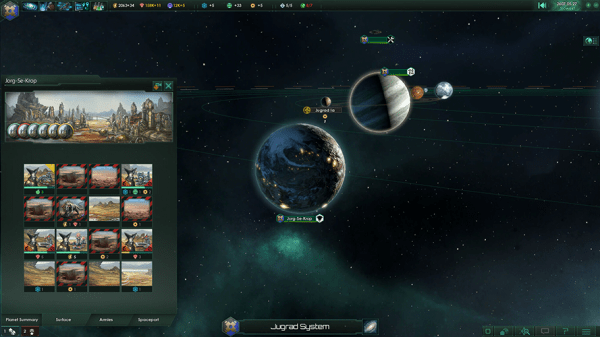 Even though you have control of the region of space that contains your desired territory, you’ll still need to wage a land war before you can conquer a planet. However, before taking that step, weaken a planet’s defenses by executing an orbital bombardment. To begin, fly your fleet around the targeted territory and give the order to attack.

Through this means of space warfare, you’ll start to weaken and eventually cripple the infrastructure of a territory. This prepares it for an eventual land invasion. If you play as a genocidal empire, you can skip land invasions and simply destroy all life on the planet.

You’ll need to build an army capable of invading your desired territory directly. You will need to transport this army to the destination planet via starship and will attack the opposing forces on the surface of the planet.

Remember that you’ll need to have firm control of the space around the territory, including control of the system’s Starbase before you can win a land invasion. Additionally, opening with an orbital bombardment will help ensure your victory on the ground.

A well-organized war machine can minimize fatigue from the above factors. Attrition, however, is unavoidable. All combatants in a war will suffer War Fatigue over time, and it is a natural cost of waging war.

The more fatigue an empire has, the less willing its populous is to continue fighting. For several types of Wargoals, War Fatigue is the main metric to pay attention to. Once a particular threshold of fatigue sets in, the Wargoal will succeed, and an end to the conflict can become attainable.

There are two ways to end a war. The most desired outcome for an attacker, of course, is victory. You can declare victory once a Wargoal has been met. This is accomplished in a variety of ways but is often affected by War Fatigue.

It’s also possible to end a war by declaring a Status Quo. What this means is that enough fatigue has set in for one or more of the involved empires that a ceasefire becomes an option for ending hostilities. This ends the war and comes with different ending conditions. These conditions aren’t as favorable as an outright victory but are far less costly than losing a war outright.

Let Loose the Dogs of War

War in Stellaris is inevitable. A condition to beat the game is to dominate over 40% of the galaxy. That is impossible without some conflict. That’s why it’s so important to understand the complex mechanics around warfare.

Following the guide above doesn’t guarantee your victory in every conflict. Luck will always be a factor. However, these steps provide you vital tools for launching an offensive and expanding the borders of your empire before your neighbors and enemies have the ability to do the same to you.

The next time you want to win a war in Stellaris, keep this guide in mind. You’ll need all the help you can get if you want to conquer the galaxy!