Influence is one of the most valuable resources in Stellaris, but unlike minerals and energy, you can’t set up a mining colony on a distant planet to collect it.  With Sidegamer’s guide to how to gain influence in Stellaris, you have the tips you need to set up the Frontier Outpost network of your dreams!

All empires receive influence automatically. At the start of a game, you’ll receive a base rate of three influence per month, which is a trickle compared to everything it’s used for. Let’s dive in and see all the ways you can boost that number. 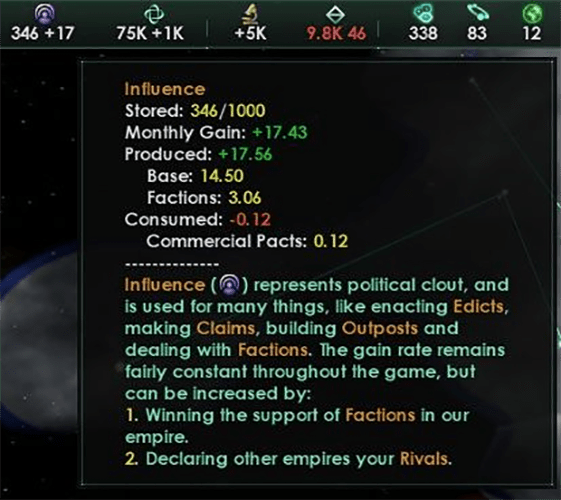 Additionally, you’ll need to have completed research on Planetary Government before you can begin undertaking Planetary Unification. The good news is that you can acquire all of these technologies relatively early in the game. Devoting time to them immediately will lead to a useful boost to your monthly influence gain.

Finally, the Galactic Administration technology grants you the ability to build an Empire Capital building, which is the only structure that grants an influence bump.

With these technologies, you will be in a much better position to accrue influence, but there are still more options if you don’t want to limit yourself.

Researching technologies is one thing, but what’s the point in ruling a galaxy if you don’t have any rivals? Lucky for players of Stellaris, you can declare rivalries with just about anyone (up to three). There’s a potential to gain as much as 1.5 additional influence a month per rival, but don’t go crazy. There are a few things to keep in mind.

First and foremost, whatever you do, don’t declare a rivalry with an empire larger than yours. It’s a sure way to get into an unwanted war, and one you will almost certainly lose.

Next, size and proximity also impact how much influence you receive per month. A larger rival—preferably one close in size to your empire—will generate more influence than a fledgling nation. But, you need to factor in the cost to your allies. Rivalries will affect smaller nations more. Finally, the closer a rival is, the more influence you will gain.

One last tip for rivalries is to strike a balance between force and peace. Being overly aggressive or too passive will lower your potential for influence gain. It’s a balancing act. After you declare a rivalry, it’s an act you’ll have to maintain for at least ten years. That’s how long the border between your two empires remains closed.

Once you’ve escalated tensions a little through rivalries, it might be a good thing to show a little mercy as well. That’s where protectorates come in. Having a protectorate does many things, but for the sake of our guide on how to gain influence in Stellaris, a protectorate has a specific value. For each protectorate in your domain, you will gain an additional .25 influence a month.

The catch, of course, is that offering to take another empire under your wing doesn’t mean they will join you. It’s up to the other nation to decide if they want your services. You can win smaller nations through war, at which point it’s easy to turn them into protectorates, but war is an expensive proposition, so keep that in mind. 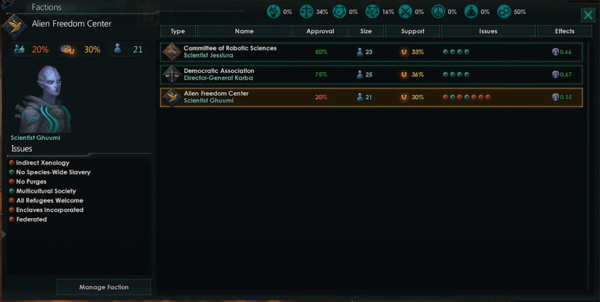 Factions are the equivalent of political parties in Stellaris, and each one in your empire grants two influence per month. If you research the Living State Technology, it increases your monthly influence by one.  On top of that base influence gain, there are a few ethics and civics principles worth considering that will increase the monthly gain.

Developing the Egalitarian and Fanatic Egalitarian principles grants a 25% and 50% influence gain. The Parliamentary System civics principle produces a 25% increase as well. Researching all three will grant you a full 100% increase to your influence. Because it’s a percentage increase rather than a flat boost, it’s possible that these three principles could provide you with the biggest influence increase in the game.

The Will to Power edict lasts 12 and a half years once issued and generates a whopping five influence a month while active. It’s a long road to get there, however. To unlock Will to Power, you will have to research Ascension Theory technology. This tech grants access to Ambition edicts, which is where you will find Will to Power.

Ascension Theory is a tier five technology, and even when you can start researching it the cost is 40,000. It’s not cheap or easy to access this upgrade, but the potential for influence gain is more than worth it.

Though not a permanent gain as the other tips above describe, uplifting a species is nonetheless a valuable way to get a one-time influence boost.

To be able to uplift a pre-sapient species, make sure that they live on a planet within your borders. You also need to ensure that you have the Epigenetic Triggers technology researched, which costs 3000 society research points.

Once you’ve met the two requirements, you’ll be able to uplift a pre-sapient species to full member status of your empire. The uplifting comes with many benefits, not the least of which is the one-time 500 influence boost.

Uplifting isn’t something that you will always be able to do, but if the opportunity arises, we definitely recommend it as a way to gain influence in Stellaris.

If you follow the tricks above, you should earn as much as 10 influence a month or more across the totality of your empire. That’s not all. Though we don’t cover it in this how-to, there are plenty of ways to reduce the influence cost of many activities, effectively increasing your influence production rate further.

Keep in mind, your empire can only have 1000 influence on hand at any time. If you reach that limit, you won’t gain any more influence once the next month rolls around. Make sure to spend your newly acquired power!

There’s a ton of goals to accomplish in Stellaris, so when you’ve completely maxed out your influence, be sure to check out some of our other guides. We go over how to expand your borders, how to build megastructures, terraforming, merging fleets, and we even provide a list of over 200 useful console commands. Have fun conquering the galaxy!

In this article:4x strategy, how to, howto, influence, stellaris, will to power