Understanding how to spend Civic points in Stellaris is one of the more subtle and overlooked aspects of an already complex game. Paradox Interactive’s grand strategy masterpiece has hundreds of discrete mechanics and interdependent systems. They influence how you build your galactic empire, so it’s no surprise that players often miss the contributions this system provides.

Sidegamer decided to take a look at how Civics work in Stellaris. We’ve put together a guide that will show you the ins-and-out of Civic Points and how to use them. What you have below is all of the information you need on how to spend Civic points in Stellaris.

The concept of Civics in Stellaris are the traits by which an empire rules and guides the lives of its citizens. There are over fifty different Civics attributes you can choose to equip but you will only be able to choose up to three at a time.

Civics range from standard concepts like Cutthroat Politics (a political strategy that reduces Edict costs by 20%) all the way to Warbots (a Machine Intelligence exclusive trait that gives a 20% boost to Army Damage while reducing Upkeep by 20%).

Civics like Warbots are only equipable by empires that have applicable authority and ethics. It’s possible that if you aren’t careful, one or more of your Civic points can become dormant.

The government type of your empire will have a dramatic impact on which Civic points are usable. Different governments have different operating principles. If you find that the Civics you currently have equipped go dormant, you’ll need to issue a reform declaration to make changes.

When you start a game of Stellaris, you’ll only have access to two Civics slots. However, it is possible to unlock a third slot, thereby increasing your potential for Civics boosts.

You’ll need to have Planetary Government, Planetary Unification, and Colonial Centralization before you can even attempt to research Galactic Administration. Once the option becomes available to you, it bears a resource cost of 12,000. It’s not something that will come cheap.

Your chosen government will have compatible and incompatible Civics options. For instance, you must have either a Militarist or Fanatic Militarist Empire for the Distinguished Admiralty Civics point to work.

This type of government might work for you for decades, but eventually, you’ll grow weary of your warmongering ways. If you do, and change to something a little less aggressive, like a Pacifist regime, your Distinguished Admiralty Civics point will go dormant.

The point remains allocated in one of your slots, but you won’t gain the benefits from it. In the case of Distinguished Admiral, a Pacifist empire won’t be able to take advantage of the 10% ship fire rate boost, additional Admiral Level point, and an increase of the fleet command limit by 10.

If this happens, you’ll need to swap out the Civics trait, and spend a different point for the now vacant slot. You spend these points by reforming your government. 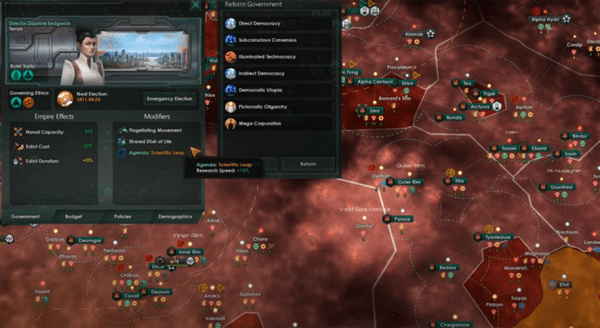 Your ethics and authority have changed, and so has your government. This has resulted in one of your Civic points going dormant. It’s time to reform your government, remove and old Civics point, and spend a new one in its place.

To execute a reform of your empire’s form of government, head to the Government tab of your main menu. There is an icon in the center of this window that you can click on, which will bring up the Reform sub-menu.

The sub-menu displays all of the forms of government you can switch to. Once you’ve decided how you want to change, select “Reform.” It costs 250 Influence to reform your government, and the action is only available once every 20 years.

Make sure that you absolutely want to take this step. Once you press that Reform button, it can’t be undone for quite a while. Influence is a currency that can be in rare supply. It’s even more important that you make this decision with both eyes open, considering all of the potential ramifications.

Why Civics Are Important

With only three available slots, you might wonder why you should care about how you spend Civic points in Stellaris. It’s true that you can play the game with unspent points, or even with dormant traits and still manage to survive but the bonuses you are awarded for a correctly functioning Civics point allocation cannot be undervalued.

An easily equipable trait like Environmentalist reduces your Pop consumer goods upkeep by 10%. Or take for example the corporate Civics trait Free Traders. With that point spent, you gain a 10% boost to both Trade Value and Branch Office Value.

What at first seems like a small bonus can very quickly become a vital element. It can determine the strength or weakness of your empire. As you begin to experiment with Civics, and the bonuses they award, keep it simple. Once you get a feel for the system, begin to branch out. But always keep an eye on their status; there is nothing worse than spending a Civics point only to have it become dormant through neglect! 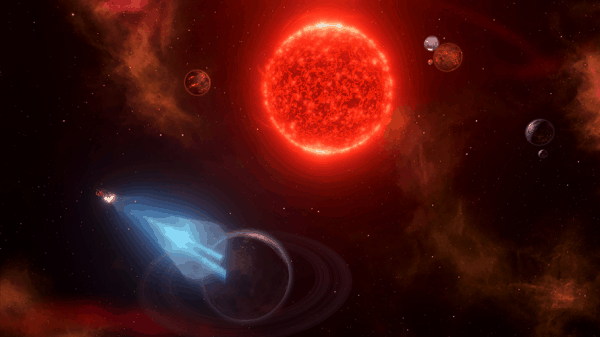 How you manage your Civic points has a significant impact on the overall course of your empire and the galaxy at large. Effective utilization is key to maximizing the strength of your government and your objective of being the preeminent civilization in the known universe.

Understanding the role that Civics plays in Stellaris, and understanding where and how to use your Civic points will give you one of the tools you need to succeed in Paradox’s brilliant space strategy game. Now that you have the know-how, go build a Colonization Ship, strike out into the stars and remake the galaxy in your own image!

In this article:4x strategy, Civics, how to, howto, stellaris