If you’ve ever perused the free to play games list on Steam, you’ll know how much variety is available right now. Steam is a brilliant place for growing developers to put their ideas to the test and get some handy feedback.

That’s precisely what The Cat Hive Developers are doing with their latest title.

Friendly Fire might not look like much at first. The style is remarkably similar to those flash games you used to play on your browser (albeit with less lag). However, there’s more to Friendly Fire than meets the eye.

The free-to-play game came from a game jam project, so it’s relatively short compared to some of the other options I’ve reviewed. However, I was impressed enough by the character work and creativity here to keep playing.

A Pixelated Platformer to Make You Feel Warm Inside

Friendly Fire is a very basic game in a lot of ways. It doesn’t look particularly stunning, although the design is nice enough. The imagery reminded me of games like Stardew valley or Terraria – just with less detail. This is the only title available from the Cat Hive Developers right now.

You wake up as a tiny non-descript guy in a magical world. Interestingly, the non-playable characters in this environment aren’t other human beings like you. Instead, you interact with sentient flames and other inanimate objects.

Like most NPCs, these cute creations are in desperate need of some help. They ask you to search through the magical world for firewood and other trinkets. However, every fetch quest comes with its own set of puzzling challenges. 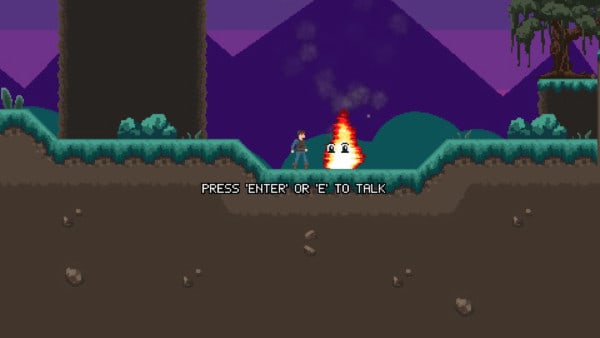 If you want to help a dying fire to regain its strength, you need to ask for some wood from a nearby tree. However, the tree isn’t going to give its wood to just anyone; you need to promise to look after it’s pinecone first, which means climbing into the clouds to fetch some water.

I was a big fan of the way everything ties together in this game. However, I got the uncomfortable sense that I was probably fetching wood for a fire that had some dangerous secrets – but hey, life is full of risks.

This mellow platform seems to focus heavily on family-friendly ideas like friendship and unity. However, it’s not completely afterschool special in style. There are a lot of funny parts to keep you smiling, with quirky dialogue to give depth to the characters you meet.

As a committed writer, I was a little thrown off by some of the grammatical issues in the writing from time to time. However, hopefully, this is something the developers will work a little harder on in future iterations.

All Sizzle, No Steak? Issues with Playability

As a free to play game, Friendly Fire is a great way to spend half an hour.

The dialogue options are engaging, the design is fun, and the puzzles are just challenging enough to get you interested. However, like most free to play games, this title is missing a bit of polish here and there too. 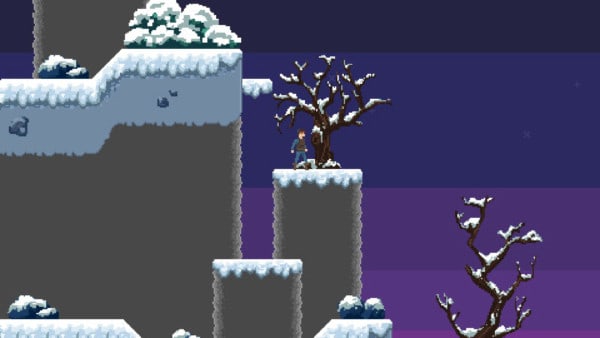 The jump mechanic doesn’t always work properly, with weird patches of invisible ground preventing you from reaching your goals. There’s also a couple of glitches that completely break the game if you’re not careful, like a rock that starts floating and pushing you off-screen.

There are a few glitches with text too which is a shame when you consider how significant the dialogue is to the game’s appeal. Some sentences overlap, making them difficult to read. There are parts of the coding here that feel a little rushed. Still, that’s a common issue with game jams.

If you’re a stickler for perfection, the areas in need of repair are going to bother you. For the most part, however, I think the fun of the game comes from the adorable and playful conversations you have with the world’s various inhabitants.

While there are some puzzling and challenging bits, the majority of the game is extremely easy. You learn how to both double jump and infinite jump exceedingly early in the game. I would have preferred a few more challenges before the platforming aspect became obsolete. But it’s worth remembering that this title was a very quick creation.

If you get beyond the issues with things like being able to glitch out of the map, there’s a lot to love about this title. I laughed out loud at some of the dialogue options. Plus, the pace and story of the game were nice too—I was keen to keep playing, which is always a good thing. 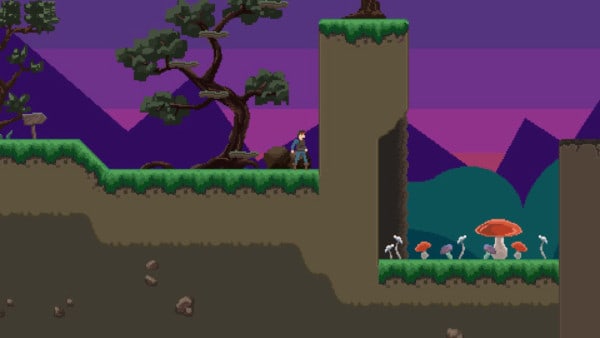 While the jumping and platforming elements aren’t particularly challenging, you do need to choose the right dialogue options to continue with the game. The right choices aren’t always obvious here. For instance, asking a tree about it’s “fertility problems” really puts a sour note on the conversation.

Funny and surprising elements like this mean that you can quickly get immersed in the game. The characters always have something interesting to say and there’s even a dancing mini-game with a tree that’s also an ABBA fan.

Two-button rhythm mini-games put a bit more versatility into this title, where otherwise the game might start to feel repetitive. Dancing on clouds also causes them to rain which comes in handy when you’re looking after that pinecone.

This free-to-play experience is short and basic but that’s not necessarily a bad thing. Though the artwork isn’t breathtaking it’s charming in its own way. Nothing feels cluttered or confusing to read, and every character has its own distinct elements.

The developers have also taken steps to help you out on your quest in several areas here. The camera pans to the location you need to visit whenever you encounter a new objective. While the music isn’t going to be on any list of 2020 bangers it blends well with the game’s atmosphere.

A Great Introduction to an Intriguing Developer

For me, Friendly Fire appears as a great resume for The Cat Hive Developers. 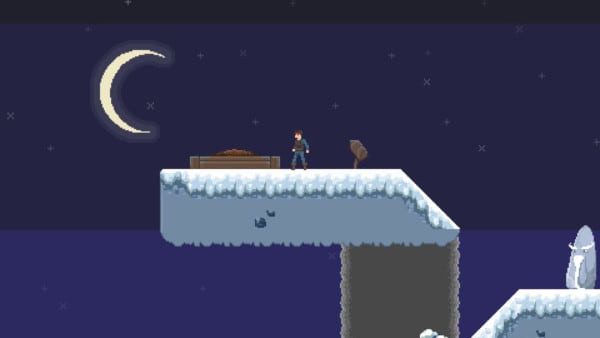 This short free-to-play game isn’t incredible but it’s enough to introduce you to the creativity and fun that this group has to offer. This is a team that can think outside of the box and offers some brilliant character work.

With a little luck, the developers will learn how to overcome some of their mechanical issues and reduce the number of glitches that players might encounter. I have a feeling that there wouldn’t have been as many problems if the team just had a little more time.

I also would have liked a lot more platforming and a few bigger challenges in this game. However, I can see that the team had to choose one thing to focus on, and they put the character design first. The work here definitely paid off. The world and the creatures you meet more than make up for any glitches.

My advice? Check it out. It’s a great way to spend half an hour, and you don’t have to spend a penny. Plus, unlike other free-to-play games like Saint Kotar, or Ginkgo, this title is ideal when you want to relax.