One of the great joys of Warframe is the moments after you’ve spent your Platinum, or after you’ve used your hard earned materials and credits to craft a new frame. The anticipation for trying out your new suit of armor is practically palpable. However, new warframes aren’t automatically equipped. You’ll need to manually switch into the new battle suit, and the steps below will teach you how to change warframe in Digital Extreme’s intense action shooter.

There are a variety of ways to acquire new frames. If you have the real world money to burn, you can always convert it into Platinum, and use the digital cash to purchase a variety of rare warframes, weapons, and other items. If you’re the kind of player who would rather earn a suit upgrade the old fashioned way, you can farm enemies to track down blueprints and crafting material and use credits to manufacture the armor of your choice.

Regardless of how you decide to approach expanding your arsenal of warframes, to equip them, you’ll need to head to the (labeled, appropriately enough) Arsenal menu.

How to Change Warframe

To get to the Arsenal sub-menu, bring up the main menu of the game by pressing the appropriate key on the keyboard or controller (we’re not going to tell you your business on the best way to control the game, no judgement here).

After that, navigate down to the “Equipment” option and select it. The Equipment menu shows you a list of every item and weapon you currently have equipped, including your warframe. Your currently equipped frame is the first entry on the list. Highlight it, and you should see a series of options. Each does something different, but the one we’re interested in is “Equip.”

Selecting Equip will bring you into a sub-menu that shows you all of the warframes you have. If one isn’t equippable, don’t worry. The game won’t let you try it on. Instead, the game saves it for you until you’re ready to use it. From there, it’s a matter of selecting the frame you want to wear. Once complete, the screen will update, and your Tenno will rematerialize wearing its new suit of armor.

Keep in mind, you have to progress far enough through the game to unlock the Arsenal menu. Until you’ve completed most of the tutorial, you won’t be able to swap out your frame. If you’re having problems, that’s a very likely culprit. 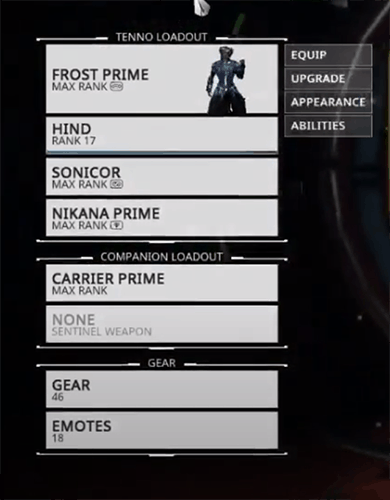 How to change warframe in Warframe is actually a pretty straightforward process once you know what you’re looking for. And now that you know where to go, you should be able to equip the most cutting edge frames without any trouble whatsoever. Don’t forget to check out some of our other Warframe guides while you’re here. They’re designed to make you an unstoppable warrior!