As you explore the galaxy, you’ll discover planets with creatures, that while not quite sentient, could ultimately become self-aware. A spacefaring empire can uplift these pre-sapient creatures. If you happen to run one of these civilizations in Stellaris, how to uplift becomes an important question.

The first thing to note here is that pre-sapient species in Stellaris will never attain sentience on their own. If you encounter one of these tribes of primitive creatures, you can’t wait around for them to attain enlightenment. As the ruler of a massive empire, you must intervene, advancing their primitive culture to one capable of advancing and ultimately expanding their civilization to the stars.

Keep in mind that genocidal empires like Devouring Swarms and Fanatic Purifiers don’t have the ability to discover pre-sapient life through anomalies. If you’re playing an empire like this, you can only encounter these primitive creatures by conquering other empires that have encountered them. So, if you want to experiment with uplifting, your best bet is to focus on less confrontational forms of governance.

How to Uplift in Stellaris

Now that you’ve discovered a pre-sapient lifeform in Stellaris, how to uplift becomes the next question. On a planet that contains one of these species, the option to uplift replaces the option to create a template. 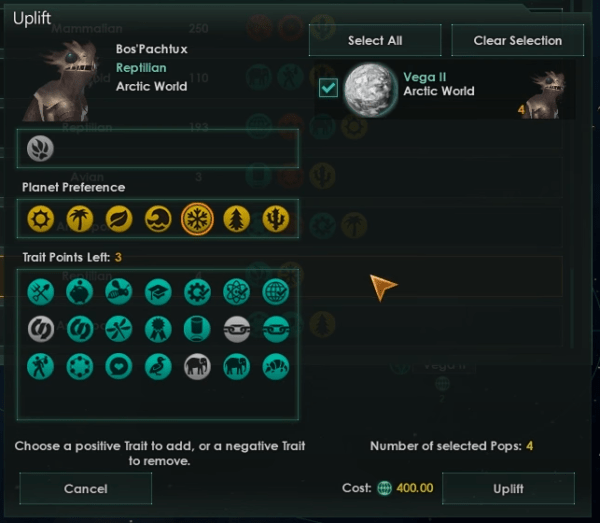 A couple of notes here. The planet the creatures are located on must be within your borders, and your empire must have mastered the Epigenetic Triggers technology before you can click the uplift button. Once you have those two pre-requisites and 3000 society research points, let the uplifting begin!

After uplifting a pre-sapient species, these newly sentient creatures will gain a 10% happiness bonus when they inhabit any one of the planets within your empire. Additionally, by completing the uplifting process, you’re awarded 500 influence, which is reason enough to do anything in Stellaris!

Your new citizens will also gain species rights based on what you have set up in your empire at the time, even if they conflict with the base nature of their civilization.

Uplifting pre-sapient species is a great way to boost your empire. Always be on the hunt for these primitive creatures as you play. And while you’re on the hunt, make sure to check out our other guides on Stellaris!