It’s known among the gaming community that the Sea of Thieves isn’t huge on instructing how to play the game. We consider it more of a learn-through experience kind of game. As such, a lot of newcomers struggle to master the varied specifics.

This is precisely why we’re here to give you not only the tips you’ll need to start the game smoothly but also give you tricks that will help take the crown home.

Let’s first look at what Sea of Thieves is.

What is Sea of Thieves? 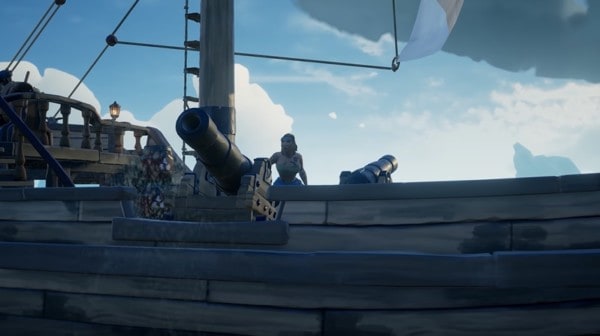 Sea of thieves is an adventure game allowing gamers to assume the role of a pirate exploring the different worlds in a pirate ship. The main aim of this game is to learn teamwork, chase treasures, and complete dangerous quests.

Players can either team up with other players or fight against teams to solve exciting mysteries and discover hidden treasures. Sea of Thieves is notorious for its exceedingly light tutorials and explanations, making it difficult for veterans and new gamers alike to start the game.

Figuring out the basics itself takes vast amounts of time. Hence, this article is for all those frustrated gamers at their wit’s end.

Sea of Thieves Tips and Tricks To Know Before You Play 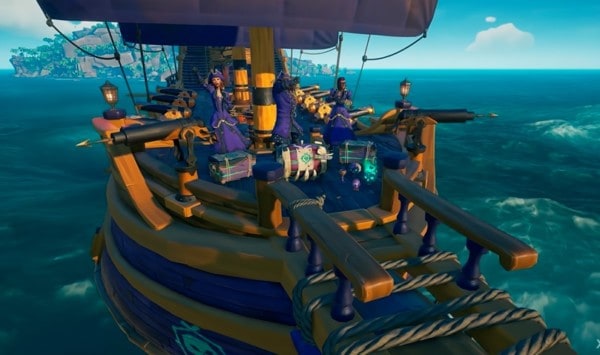 Stock Up On Your Items

Collect any item you might find on the island. For example, Bananas will help revive the player’s health, cannonballs for the cannons in the ship, and planks prove valuable in tasks related to repair. You can store the items you found in the barrels present on the lower decks.

It is essential to keep your pockets empty (except for a bunch of bananas to restore your health), as you can keep stocking materials. The more you have stocked, the less likely you’ll find yourself in a precarious position.

After stocking, go to the isle merchants and get yourself some quests. You can activate them from the Captain’s cabin. Wait for enough players to vote on a quest.

Additionally, you can vote by standing in front of the table and selecting any of your choices. Once all the players have voted, you will receive the relevant information regarding your destination. Locate the island on the map by heading down and circling it.

Note: Remember the directions required to reach your destination on the map or assign it to someone else in your crew.

Sea of Thieves Tips and Tricks For Sailing

Sometimes, you will encounter raging storms or monsters that will wreck your ship apart through your journey. It is vital to know the relevant information needed to repair your water vessel at times like these.

What to do when your ship is filling up with water? 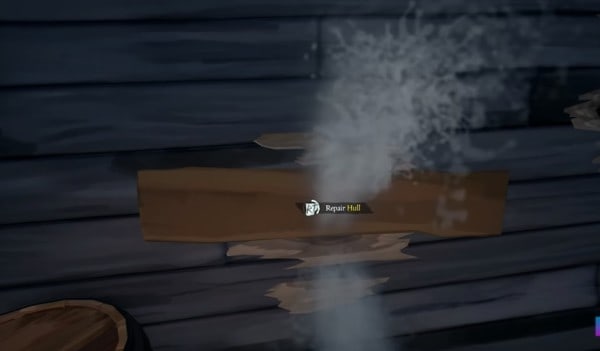 First, take a plank and seal the damaged area of the ship. Second, scoop out the water with a bucket and throw it out overboard.

If the damaged part is on the main deck or any other floor, scoop the water out and throw it out of one window.

Note: Remember that riding through a storm can also cause leaks to appear in your ship. Similarly, sailing into wreckage or slamming into an island doesn’t help too. Stay vigilant while sailing the ship and watch for any leaks that can potentially capsize the vessel.

Now that the basics are out of the way, let’s focus on the Sea of Thieves’ extra tips and tricks that online gamers need while sailing.

This is a useful trick to help gamers rejoin their teammates if they abandoned you or you jumped overboard while out on the open seas. Look for a plume of smoke rising from the water.

Once the ship has made some distance, a mermaid will appear out of it. Interact with it, and soon you’ll reconnect with your teammates.

Whenever you’re in a hurry to land, throw yourself into one of your cannons and get ejected onto the island. We’re not kidding – this genuinely works! First and foremost, aim the cannon to wherever you want to land.

Make sure the cannon is not loaded, then climb in yourself. Once you’re in, fire yourself away. You might end up taking some damage once you land, so always aim for the water near the shore.

You’ll need the support of your crew for this one. Turn the wheel in the required direction and drop the anchor, thus jolting the boat in the same direction. The wind can also help here, so make sure to note its trends.

Always bring your steering wheel back to the center. To do this, observe that one of the wheels is painted in gold, which shows that it’s the center.

The wheel can make 2 complete rotations for larger ships like the galleon. So listen for a loud smack sound as the gold handle passes to confirm the center.

Other than the compass, another easy way to navigate is by locating the north star. It is the star that shines the brightest in the nighttime and can lead you towards the north.

Store everything you carry, and that includes bananas, wooden planks, and anything else. Especially if you’re on a large island, go to the local towns and salvage whatever you can from the barrels. These supplies prove instrumental during times of need.

The most obvious sign of an upcoming storm is the thunderclouds. Prepare yourself to take some damage when you see dark clouds and lightning.

Other than that, keep a lookout for a skull cloud. This cloud points your way to a skeleton outpost, and there’s a high chance of finding sunken ships.

Sea Of Thieves Tips and Tricks for Sailing With Others

Sailing yourself in-game is one thing and coordinating this with a team is a whole different gamut.

Communication is the most vital aspect when playing Sea of Thieves. You’ll need your headset to give out commands while navigating the ship. Remember to keep the voice chat enabled throughout the voyage.

The Sea of Thieves chat relies on proximity which you can use to your utmost advantage by thinking smart. You can simply chat with teammates and make beneficiary friends and eavesdrop on other conversations if your enemies are planning something.

Although remember to not give away too much in your chat section as others can eavesdrop on your conversations too. For the ones who can’t use the microphone because of an issue, don’t worry! There are pre-made options for you in the game to work with too.

Just hold the d-pad to open a wheel of pre-made text messages. To select one, move your control stick over a message and let go to send. Similarly, hitting x can also reveal an additional set of dialogue.

If a teammate is causing many issues, the rest of the team can vote to send them to the brig. Once the player is locked in there, there’s no other choice except to be voted out again or quit.

Voting is also required for scuttling ships. This is especially useful for situations with no way out. Vote to scuttle your ship, and you’ll be released to a nearby island.

The greater number of players you have, the faster your work gets done. This also helps speed up the process and increase the quality of the work.

If you drank too much grog at the bar, you’ll ultimately vomit, and when you do, keep a bucket ready beside you to puke into. It can come in handy when there’s an attack on the ship as this vomit can impair other players’ vision and movement.

Sea Of Thieves Tips and Tricks for Surviving The Ocean 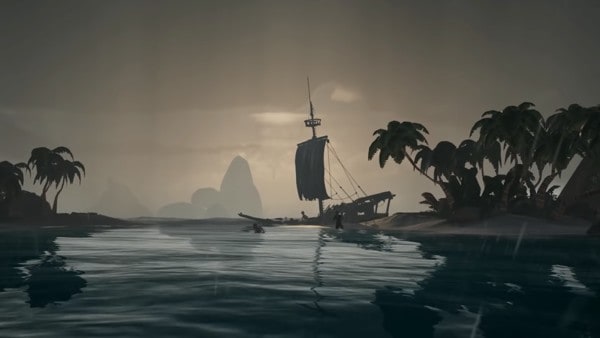 Deadly storms and perturbing vision is the worst enemy while surviving the ocean. Let’s look at what can work in your favor.

Once the sun goes down, shut those lanterns off to create an element of surprise in the event of an enemy attack. There’ll be an ample amount of light from the moon to continue with your work.

At the same time, be wary as lanterns radiate a yellow glow that can be seen from a distance and spotted by your enemies.

The spyglass is handy while spotting enemies but be careful not to stare into it for too long. Because when sunlight falls on it, it will emit a bright flash alerting your enemies in an instant.

The cannon is the most remarkable and effective weapon any Sea of Thieves player can have. Here are some tips and tricks that will help you use its full potential.

Here are some moves you should know if you’re going to combat in the Sea of Thieves.

Contrary to popular belief, don’t start firing your cannons the moment you spot an enemy ship at one outpost. It will only attract unnecessary attention and eventually result in your treasure being stolen.

To avoid that, try quietly sailing to the back of the island and sneaking into town. This assists in steering clear from unnecessary conflict and delivering your treasure safely.

A Blunderbuss is a handy tool that is recommended to invest in. Within its range, this shotgun can take your enemy down in a single shot. Gamers can acquire this from the armory or weapon shop on-ship.

No, you must seriously consider this! If you’ve got enemy ships chasing you, keep your ship at full throttle and jump off from the side. Then wait underwater for the enemy ship.

Once it’s near enough, swim up and wreak havoc on them.

If there’s a large ship chasing you, maneuver your snoop’s sleek agility to make drastic heading changes. This will help put more distance between both the ships, and soon you’ll be out of their sight.

Since pirates are extremely common here, always find unique places to hide your treasure as much as possible. Here are some ideas to get you started:

If you must put your chest below the deck, keep the chests with more value at the far back as pirates will take only the chests in front of them.

If you’re on a sinking ship and don’t know what to do about your treasure, don’t worry. Save yourself first and wait for the ship to sink.

The chests will float to the surface, where you’ll be able to salvage them. Remember this for downed pirate ships too.

Despite preparing yourself to the fullest, sometimes you will be outmatched by the enemy ships and pirates. However, this doesn’t always mean they have to rob your treasure.

Keep in mind that items are static in this world, so you can quietly stash them on a nearby island. Like this, you can use the mermaid to get your ship back and sail to the island where you left your loot.

To sum up, the Sea of Thieves focuses on the learn-by-experience method. It breaks all expectations of the gaming community regarding in-depth instructions and forces you to venture out of your usual gaming comfort zone.

For all the new gamers out there just starting, keep paying attention to the subtlest details. Now that you have these tips and tricks in mind conquer those quests and fearlessly sail your way to the top!