When you think of thrilling free-to-play games, you probably don’t see them being created by a national bank. Banks are necessary but boring. Unless you have a passion for the stock market, a trip to the bank won’t be your idea of a wild day.

So, what’s the deal with Island Saver – a game that was co-created and published by NatWest Bank?

I know what you’re thinking, it’s probably one of those soul-sucking educational games, right?

Well, yes and no. Island Save is educational. It helps to teach kids about things like interest, and investment. However, there are fun parts to it too. I’d go as far as saying that Island Saver has no right to be as engaging as it is. 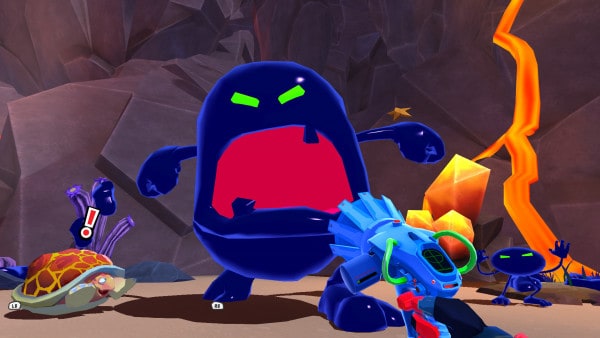 Island Saver might have NatWest bank at the helm, but the financial company also had some help from Stormcloud games. If you’re unfamiliar with Stormcloud, they helped to build things like Crackdown 3 multiplayer.

Let’s take a closer look at this educational game.

Save the World and Save Some Cash

The name “Island Saver” is actually a double entendre.

You’re saving an island full of dinosaurs and brightly-colored creatures from absolute destruction. However, you’re also saving your money on the side, and learning how to use it more effectively.

This is one of those sneaky educational games that teach you something before you realize you’re learning. You explore your new island as a faceless protagonist. Unfortunately, just like the real world, you discover that your digital world is covered in trash.

There’s a whole bunch of cans, plastic, and glass scattered everywhere, making it difficult for creatures to thrive. Fortunately, you have a gun that eats garbage – so it’s all good.

From a mechanic and visual perspective, this game is reminiscent of Slime Rancher. I racked up quite a few hours up on that game when it first came out, so I felt right at home on the Island Saver plains. Just like you suck up slime with your gun in Slime Rancher, you absorb trash here. 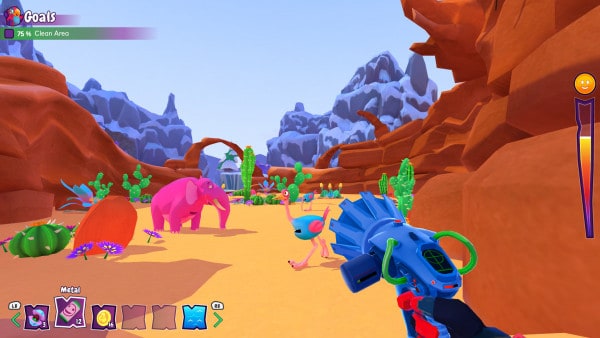 As well as sucking up trash, you can also consume any money, foreign currencies, and fruits you find. The game also offers the option to suck up animal poop which you can use as fertilizer. Pretty thrifty.

Another similarity to Slime Rancher is that you need to create the right habitats for each animal you want to attract back to your island. That means learning how to grow your creatures’ favorite foods. The more you feed these piggy-bank style beasts, the more likely they are to stick with you on your newly cleaned-up islands.

There’s something oddly therapeutic about Island Saver. Sucking up the trash and cleaning the goop away from the island felt like picking weeds on Animal Crossing. The more you work, the more beautiful your island becomes. Plus, a cleaner island means more creatures and bigger rewards.

However, like Animal Crossing, there isn’t much challenge to this game. It’s important to remember that this is a title made for children, to teach them how to use their cash correctly. That’s not to say that there aren’t some fun tasks to explore, of course. 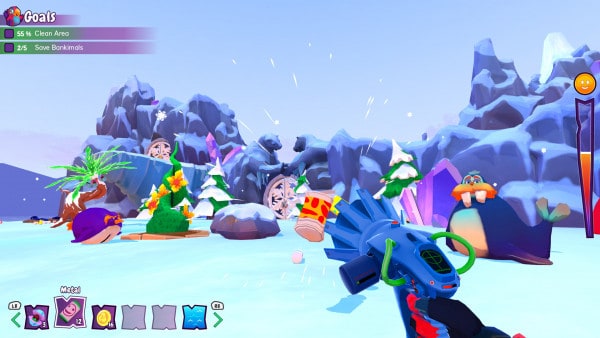 For instance, every island you visit comes with two animals that you need to save. Sometimes, you can ride the animals into new locations that you couldn’t visit before. Other times, you can use your animal pals to smash through larger piles of trash.

Though simple, Island Saver still has enough substance to it that it feels like a real game. That’s a rare thing for a free-to-play title. It’s even more unlikely when you consider this game was made by a bank.

I honestly expected to see more sales tactics from NatWest here. Maybe pop-ups telling you about current accounts and how they work, or some NatWest branding here and there. However, Island Save is surprisingly subtle. There’s nothing overly obvious about your financial experiences.

Every now and again, you will come across a game mechanic that reminds you you’re playing a game that a bank dreamed up. For instance, you need to get a loan to access one of the islands, and that’s where NatWest comes in. However, rather than actually giving you the loan, NatWest declines your request, and you get the money from a Loan Shark instead.

This leads to a fun lesson about avoiding deals that are too good to be true. 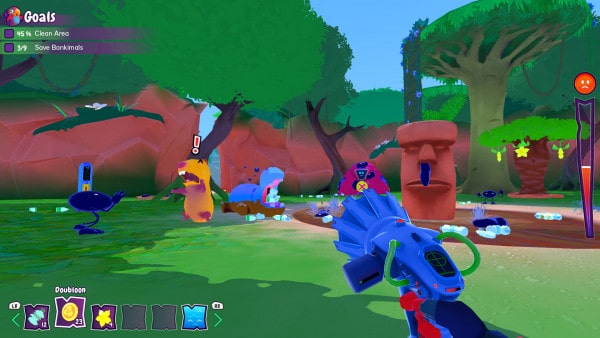 For the most part, Island Saver is just a cute and charming game, perfect for kids. The “Bankimals,” which are the living piggy banks inhabiting the island, come in a variety of colors to make them more attractive. Plus, since every new island you unlock means new animals, there’s a constant desire to keep going.

I also quite liked seeing the threat of the mess and pollution on the island represented as little goop goblins. Everything seems to work together to make the game feel more complete.

A Saving Game With Plenty of Value

I was impressed by how fun Island Saver was.

Sure, there’s a greater focus on money management in this title than you would get in most games. However, the money mechanics are introduced in a way that doesn’t feel super intrusive. Saving up doubloons (the game’s currency) feels as natural as saving Bells in Animal Crossing.

Since a lack of financial confidence is something that many children and adults suffer from, it’s easy to see the value in this game. It’s educational without being boring and condescending. That’s a difficult line to walk.

Of course, there are a few issues with the game. The tutorials seem a bit overblown at times, which might be great for children, but not so good for adults. The tutorial elements can make the game feel excessively slow in some places. 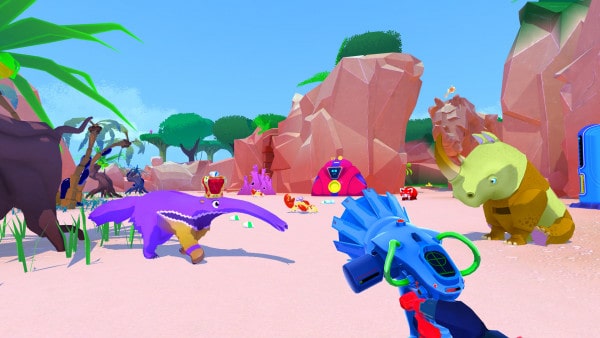 Additionally, the lack of inventory space can feel a bit restrictive too. You’ll start with about four slots to work with, and gradually unlock the fifth slot at the end of the game. Since you’re going to be collecting a bunch of seeds and foods for animals, it’s tough to carry everything at once.

Having to run back and forwards between segments of the game is exhausting at times. However, I don’t see that being too much of a problem for younger kids.

Overall, Island Saver is a surprisingly fun free-to-play game with some important lessons baked in. It’s probably more for younger players than adults though. If you need something a bit more challenging, try Sockventure.

Island Saver is also available on PS4 and Xbox. If you want to play Island Saver, you can find the free game here.