At first glance, Cyber Hunter looks like an incredible title—something that’s far too impressive to be available for free. Just take a glance at the graphics, and you’ll see what I mean.

Of course, any game that starts life as a mobile app instantly raises a few red flags in my book. Most titles originally designed for smartphones and tablets just don’t work as well as fully-featured Steam games. More often than not, you end up with buggy controls and awkward mechanics that just don’t migrate the way they’re supposed to.

Despite this, I still wanted to give Cyber Hunter a go.

According to the developers (NetEase), this is essentially a Battle Royale game similar to PUBG, or Fortnite (ugh). However, there’s a lot more depth to it. You get huge sprawling maps to cover, and there’s no need to spend your time building structures or hitting rocks.

There’s a limit to how much you can actually build, and you bring pre-set structures into battle with you. 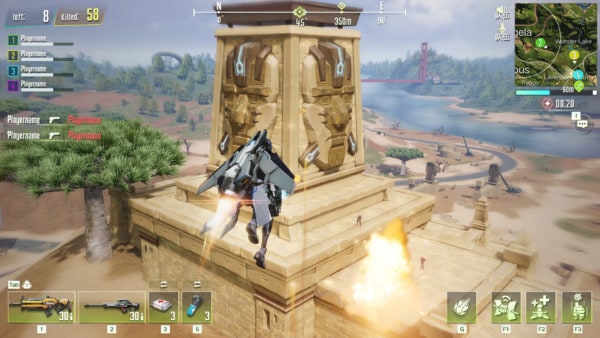 The good news is that the structures available are pretty varied. There are healing machines, which come in handy after a brawl, and simple barricades for protection.

You need to pick your favorite three options out of a wide selection. Every time you play the game, you can experiment with different ideas, or develop certain skills.

It’s also good to know that you don’t have to worry too much about resources. There’s only one resource to think about: quantum energy. You use that solution to build absolutely everything.

You collect this substance just like weapons and other gear, and it’s dotted around the world, ready for you to pick up.

There’s also a greater focus on working together with a team in Cyber Hunter than you’d get with most Battle Royale games. You can have dedicated healers and builders on your team or have a player that’s committed to summoning certain kinds of vehicles. 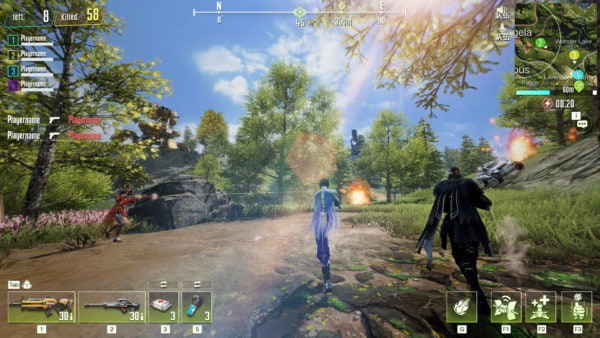 If you love the creativity involved with building in Fortnite, then you might miss that factor here but honestly, I don’t see it as a huge loss.

Aside from easy-to-pick-up gameplay, you also get amazing aesthetics as part of the Cyber Hunter package.

As I mentioned above, the graphics are really well done and professional for a free-to-play game. Like with Fortnite, you pick where you want to start the game on a large map and drop out of the sky on a hoverboard (cool).

The science-fiction style environment really does feel like a breath of fresh air to the Battle Royale landscape, even if the colorful backgrounds do bring you back to Fortnite from time to time.

As you explore the world around you, you’ll find lots of amazing loot and new environments. You’ll also gradually learn where the safest places to land are. Of course, picking off competitors fast will earn you some extra loot if you can manage it. 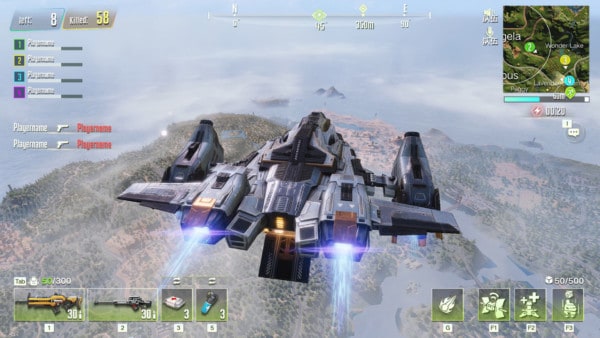 Moving around the map is one of the most thrilling parts of the game. Everything feels so fun and smooth, like gliding. You can roll and jump out of the way of gunfire, climb buildings like spiderman, and even reach the tops of mountains in virtually no time.

The movement feels quite similar to Breath of the Wild. Usually, movement mechanics aren’t something that stand out too much for me in gameplay, but in this case, they were hard to ignore.

Get Stuck Into Some Great Combat

Although you might want to spend most of your time leaping around the map at first, the number of options you have for killing other competitors does encourage you to get stuck into battle as quickly as possible.

You can throw up a barrier and fire at other people from safety or chuck some explosives around. If you prefer to take advantage of the “high ground,” you can climb to the top of a building and get a height advantage that way instead.

The gunplay is wonderfully satisfying too which is a nice extra touch. You can fire in third person (no scope), if you feel confident enough, or look down the barrel of the gun for extra accuracy. There’s a little recoil to consider but it wouldn’t be realistic otherwise. 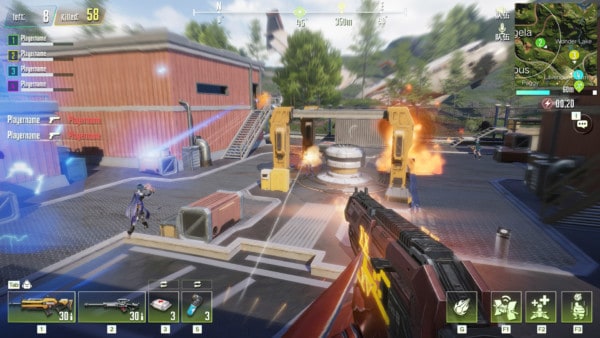 The great thing is that you don’t have to be a shooter expert to really enjoy this game. You’ll pick up the aiming and shooting factors pretty quickly, and the rest of the mechanics are super intuitive. Cyber Hunter seems like a brilliant alternative to options like PUBG and Fortnite which are starting to feel stale.

Unlike most mobile games turned computer titles, I definitely would recommend sticking to the computer-focused version of Cyber Hunter if you’re going to play it. I can see it being tough to control everything well from a smartphone screen. Plus, the background and aesthetics are nice enough that you’ll want to see them in all of their glory.

If you’re looking for a fun way to spend some time shooting your foes and checking out some cyberpunk scenery, then Cyber Hunter is a good option.

As a free to play game, this is one of the better time-killers on the market right now, and it’s a pleasant surprise for those who want to rediscover the Battle Royale experience.

Get Cyber Hunter for free from Steam here.

In this article:Cyber Hunter, Free games on Steam, Steam games