Glyphwords are a powerful enchantment added to The Witcher 3 in the Hearts of Stone expansion. Like Runewords, which affect weapons, Glyphwords bestow unique attributes to any armor piece they are applied to. Let’s take a look at The Witcher 3’s best Glyphwords.

With one Lesser Glyph of Aard, Lesser Glyph of Axii, and Lesser Glyph of Reinforcement, the Glyphword Depletion can be yours. This powerful enchantment grants your Aard spell a great new feature. Any enemy hit by Aard when you cast it will also have their stamina depleted by 50%. It’s a great enchantment to have equipped if you find yourself wading into large groups of enemies often.

When an unseen archer shoots an arrow at you right when you are about to land your finishing blow is one of the most frustrating aspects of combat in The Witcher 3. This is especially true when you’re trying to manage a large mob, and that sneaky archer is just out of your line of sight. 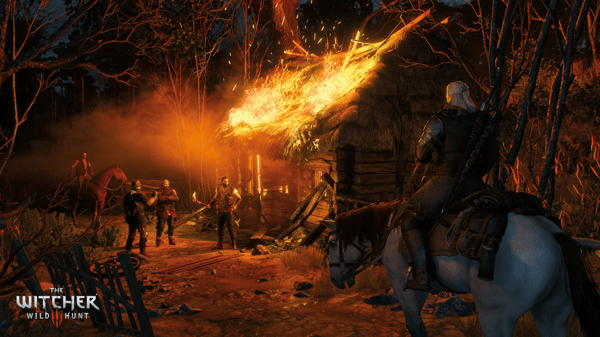 Want to cast a free spell without costing any stamina? Want that spell to be the always useful Quen? Then Protection is a Glyphword you absolutely need to track down. Once you’ve equipped Protection, you have a 100% chance of automatically casting Quen with no stamina cost when you enter battle. It doesn’t work on horseback, but this minor drawback shouldn’t dissuade you from equipping this Glyphword.

With Retribution active, you’ll have a 30% chance of reflecting a portion of any damage received back at your attacker. Even though 30% seems low, when you’re fighting a ton of enemies at the same time, you’ll be amazed at how often this Glyphword activates.

For an explosive addition to a combat encounter, we recommend unlocking the Eruption Glyphword. When active, Eruption causes any enemy afflicted with Igni to explode when they die. The explosion will then ignite any nearby foe within the blast radius.

Even the mightiest foe won’t be able to penetrate your defenses with these powerful Glyphwords active. While you’re earning your coin, don’t forget to check out these other awesome Witcher 3 guides.

In this article:cd projekt, glyphwords, hearts of stone, rpg, Steam games, the witcher, the witcher 3