Valorant is a widely famous, free-to-play first-person shooter game developed and published by Riot Games. The game is usually played by completing the objective of either eliminating the enemies or planting/diffusing spikes. Moreover, the theme of the game is set in the near future.

In the primary game mode, the players are assigned to either an attacking or defending team, with each team containing five players. These players play as a set of agents with characters that are inclusive and diverse in matters of looks.

Every agent has unique abilities requiring a certain amount of charges applicable to them. As these agents are crucial to success in the game, let’s deep dive to find out what exactly they are and how they work.

What Are The Agents In Valorant? 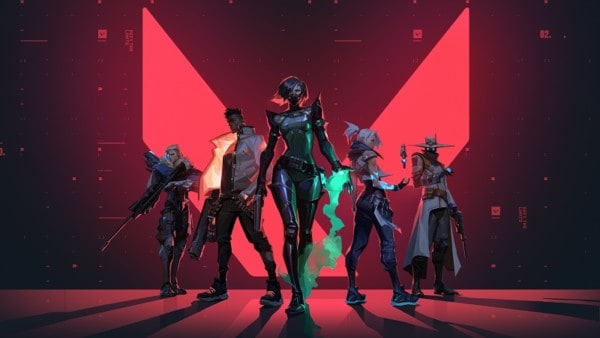 Players use agents to participate in a battle across different maps and territories in Valorant. With the latest update, there are a total of 16 agents. They are as follows:

She is known as the explosives expert in Valorant. The one with the most killing potential, Raze carries a kit that has everything you’ll need for bombing a site.

He is a pyromancer who can create walls and come back to life through a special suit.

He is an initiator who is excellent at playing opponents that are positioned to hold chokepoints.

Omen is a flanker with advantageous abilities such as teleportation, going through walls, and obscuring the enemies’ vision.

She is the fastest agent in Valorant, which makes her an admirable duelist. Furthermore, she has abilities such as boost jump and can run from side to side to engage or disengage.

She is a genius who uses a wide array of mines, traps, and turrets. Above that, she also gathers a large amount of valuable information, controls areas, and is the only agent who can disarm her enemies.

He is a commander with abilities that can call down an airstrike, fire napalms, etc. Brimstone is also versatile with everything that involves using a minimap.

She is a vampire whose strength increases with her number of kills. Not to forget, she has incredible raw killing power and can inflict nearsightedness on her enemies, heal herself, and turn invisible too.

He is an excellent option for defense as he can hold a lot of estates alone. Cypher is a spy that gathers information through the camera and tripwires. Despite this, he is also helpful on the offense.

She is a commando that uses animal-based trinkets to inflict harm on the enemy. Above this, Skye is a hybrid who can engage, scout, and heal.

He is a superb archer who also has an owl that marks where an enemy is. Sova uses his abilities to track his opponents along with his ultimate move.

Bonus Read: Craving to figure out how to announce and declare war in CK2?

As of now, she is the only healer in Valorant fully equipped with a defense kit and a healing orb. Sage also has ice-related abilities to block off enemies and has one of the most potent ultimate versions.

He is a trickster that is an absolute nightmare to potential flankers. Yoru has unique abilities that depend on his knowledge of the map and who his opponents are.

Viper is a unique bomb planter. She uses toxic gases as her primary offense. In addition to that, she creates a wall with poisonous fumes, throws grenades that emit poison, and so much more. Her ultimate version can create a poisoned room too.

He has a powerful ability called suppression that can stop any enemy from using their powers. Kay/O is also versatile and an ultimate version that can allow his teammates to resurrect him too.

She is one of the most unique agents in Valorant due to her abilities. They can place you anywhere on the map, play the game like a chess match, and set your teammates up with weapons.

Keep in mind, every agent is equipped with four unique abilities, including an ultimate attack move.

Classification of Agents in Valorant

Each agent is characterized into 4 subclasses. They are subdivided based on their skills and combat type. Here is a list of each category and what they entail.

Also known as “self-sufficient kills”, duelists are used for attacking or defending the team while entering the bomb site. They create an opening for the team to enter into the site by giving them information. This makes the process of invading much easier.

What’s best, they can cover large distances faster than any other agent, thus making them a valuable asset to the team. Some of their abilities include flashes which help blind enemies.

Examples of duelist characters are Jett, Phoenix, Raze, Reyna, and Your.

Sentinels are the defendants of the team whose duty lies in protecting their teammates from enemies by locking down sites. Even better, their abilities comprise of creating static objects that appear as obstacles to the enemies.

These objects provide valuable information as well as deal with the damage. When under the stack, sentinels can use their abilities to cut off certain parts of the map, thus leaving the enemy blindsided. Some examples of sentinel characters are Cypher, Killjoy, and Sage.

Initiators come up with a plan for the offense. They specialize in breaking through the defenses of the enemy hence making them excellent attackers. One of their most valuable abilities is to reveal the location of enemies.

This information makes it hassle-free to determine where the enemies are and help embark on a ruthless entry into the site.

Examples of initiator characters include Breach, Kay/o, Skye, and Sova.

Controllers help enter the enemy territory by using their abilities to create coverage or clear out areas using crowd control. These abilities consist of slows, stuns, flashes, smokers, and so much more.

Above that, they control the map’s sightlines, making it easier to move through the map without getting noticed.

Some examples of controllers include Astra, Brimstone, Omen, and Viper.

These agents are subcategorized into tiers ranging from one to ten. Further on, these tiers represent the upgrades an agent can have, with ten being the highest upgrade.

Remember, the last tier includes a specialized weapon for each agent.

Note: Players must first acquire the required XP for each tier by playing and completing daily challenges to attain a new tier.

Now that we know what agents are and how they are classified let’s delve deeper into how to unlock agents in Valorant in the fastest, most effective way.

Bonus Read: In dire need of understanding how to play defense in Stellaris? We got you!

How to Unlock Agents In Valorant? 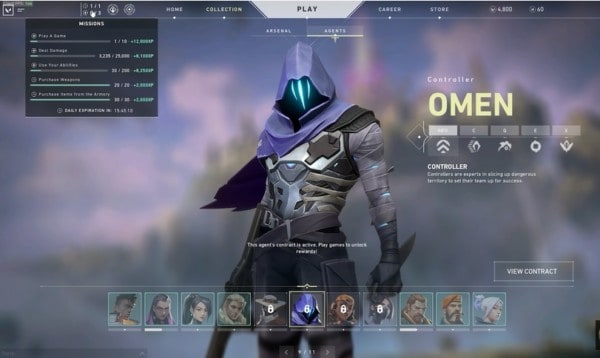 Upon downloading Valorant for the first time, you will immediately gain access to a total of 5 agents. They are Brimestone, Jett, Phoenix, Sage, and Sova. Players need to keep progressing through the rest of the game to acquire the rest of the agents.

However, after gaining the first five agents, you can unlock two more agents by playing the introductory levels. When you reach introductory level 5, you are offered the choice of unlocking one agent of your choice.

Similarly, when you reach level 10, you can unlock another agent of your choice from Raze, Cypher, Breach, Viper, or Omen, thus making you in possession of 7 agents in all.

Here is a step by step guide to activating the introductory levels:

How To Unlock Agents In Valorant?

STEP 1: Click on the agents’ tab at the top left corner.

STEP 2: Choose the agents you want to unlock.

And that’s it! You’ll be good to play the games and earn XP points to go through the tiers.

After you’ve gained all seven agents, the route to unlock the rest of the agents gets a little more interesting.

Here’s how to unlock the rest of the agents in Valorant:

Playing your way through to earn XP points needed is the traditional method to go about unlocking agents if you don’t want to spend cash over them. Though time-consuming, it saves your money. The process is as follows:

STEP 1: Click on the agents’ option at the top left corner in the main menu screen.

STEP 2: Choose the agent that you want to unlock and click on it.

STEP 3: You will receive two options. Click on the option that says “activate contract”.

STEP 4: Continue to keep playing games until you reach tier 5 for that agent.

You’ll now be able to unlock the agent.

Tip: Concentrate on completing the daily challenges as they provide XP point boosts.

Some of these challenges also have time limits, so make sure to complete all of them before time runs out. You need 25,000 XP to complete tier 1 of any agent’s contract.

Every time you progress to a tier, extra points of about 25,000 XP are added. Your XP will look like this:

Although your agent unlocks by the time you reach the 5th tier, you are required to complete all 10 tiers to gain the agent’s ultimate version. Valorant gamers can achieve this through regular gameplay or by completing daily challenges.

If gathering all these XP points sounds extremely tedious to you, the next option should be suitable.

The most effective way to get through all those tiers is by paying real-world money. You can simply buy the agents without wasting time. However, the cost is not cheap either.

Step 2: Click on the agents’ tab and choose an agent of your choice.

Step 4: A new screen will appear with all the tiers at the bottom. To the right of those tiers, you will find a green tab labeled as “unlock tier 1”.

Step 5: Click on that tab, and you’ll be directed to the necessary payment protocol.

This is an entirely optional method as gamers can always gain XP points and unlock the agents by playing their way to the crown of glory!

What Are The Best Agents In Valorant?

Valorant is a subjective game. As such, the list mentioned below has characters purely voted out of popularity. Since each gamer’s playing style is different, all opinions are equally valid.

Some of the popular ‘s’ tier options are:

Some of the popular ‘a’ tier agents are:

Finding success in the game majorly depends on the agents. They are the main focus in Valorant, and as such, it is essential to ensure making the right choices while choosing the agents you wish to unlock. After all, you will never know which agent you might need for a particular mission!

The most intelligent way to perform this is by verifying that the agents you choose have the right abilities for any given match. Of course, you should unlock as many agents as quickly as possible, especially early in the game.

At first glance, paying through your way does seem easier until you get stuck with an agent not required for your level. On the other hand, playing your way through and collecting XP points to unlock characters will not only let you gain some cool veteran moves but also prove helpful while unlocking agents!

Bonus Read: Learn the nuances of how to find Indre Holm in Ac Valhalla!