I’m not just an avid gamer.

On the rare occasion when I have a little spare time, and enough brainpower, I love picking up a good book too. I did a degree in literature and have a bookshelf full of classics like Sherlock Holmes and Dante’s Inferno.

When I heard there was a new game on Steam that’s basically an interactive story – I was intrigued.

Don’t worry, this isn’t just the playable version of the Old Man and the Sea. The Night Fisherman is a unique digital experience, published by Far Few Giants.

Let’s take a closer look at this intriguing moonlit tale.

A Simple Game with Important Themes

The Night Fisherman isn’t a fast-paced romp on the ocean like Assassin’s Creed Black Flag. It’s also not the kind of title you’d play to relax, like Animal Crossing. 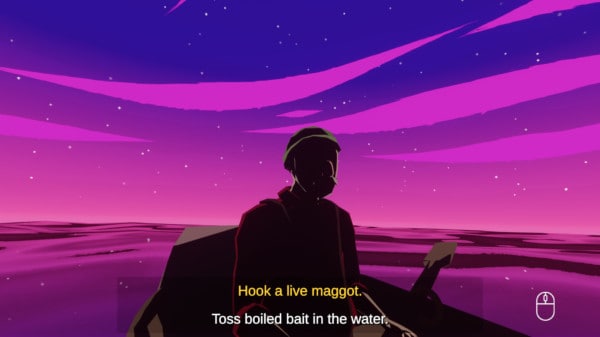 What you get from this title is a robust piece of literature, brimming with meaningful commentary on things like racism and violence. According to the Adventure Games Podcast, this title says more in ten minutes than most games say in ten hours. I’m inclined to agree with that assessment.

More of an interactive book than a real game, the Night Fisherman doesn’t give you any significant control over your character. Instead, you’re thrown into an ocean of pink and purple shades, to tune in on a powerful tale.

If you haven’t played the game yet, I’d recommend doing so before you read the rest of this article. This is a title that’s best approached blind – like Undertale.

The Night Fisherman starts on a serene nighttime scene. Your character (Mr Gardiner) is sitting in a tiny fishing boat. Your job consists of two things: fishing and smuggling goods into England. The second part of your career causes a few problems. 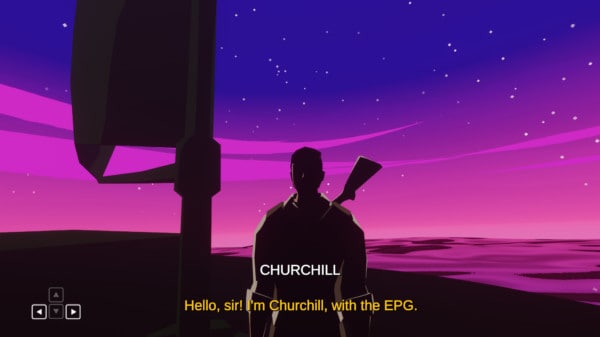 That’s because the English Protection Group, or EPG, is on the prowl.

Despite your surprisingly chill nature, you somehow manage to attract the attention of Mr. Churchill – a member of the EPG with quite a significant reputation. The game doesn’t tell you exactly why you end up with Churchill on your back. Instead, it asks you to chat casually with your interrogator.

You have to choose your responses carefully – a bit like you would in a Telltale game. Churchill’s gently probing questions quickly started to make me feel nervous. I found myself anxiously making choices about what to say, convinced that Churchill could sense my guilt.

Rediscovering the Tension of Human Interaction

Honestly, the Night Fisherman shouldn’t be as stressful as it is.

The majority of the game is all about you just talking to someone else. There are no quick-time events, or battles to the death here. The problem is that you know this other guy knows something. It’s almost like he’s toying with you. 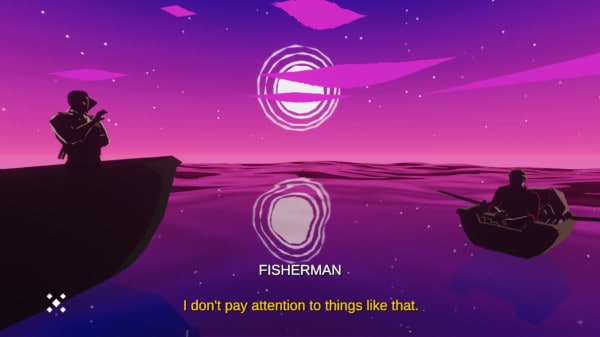 If you’ve watched the beginning of Inglorious Basterds, then you’ll be familiar with the kind of atmosphere int his game.

As you progress through your conversation with Churchill, it becomes increasingly evident that you’re not going to talk yourself out of anything. The antagonist seems painfully smug and seems to boast about his title – the “kid fisher.”

Churchill’s character is a homage to the Inglorious Basterds character, Hans Landa. He speaks with pride about the act of drowning children smuggled across the sea. Since I loved the movie, I immediately saw the connection. Unfortunately, there are some similarities between Inglorious Bastards and The Night Fisherman that go too far.

There are portions of speech that are almost exactly the same. For me, that reduced some of the tension the game started to build. It also made me feel a little annoyed. Come up with your own ideas guys…

Despite the parts of this game that border on plagiarism, The Night Fisherman is still a pretty impressive experience. Even though I had no idea what the Fisherman was doing smuggling kids across the sea, it was hard not to be instantly on his side.

I was a big fan of the orchestral soundtrack too. Richard Campbell did a fantastic job of adding an extra atmosphere to the piece.

An Emotional Experience in a Small Package

A decent amount of heart went into this creation. 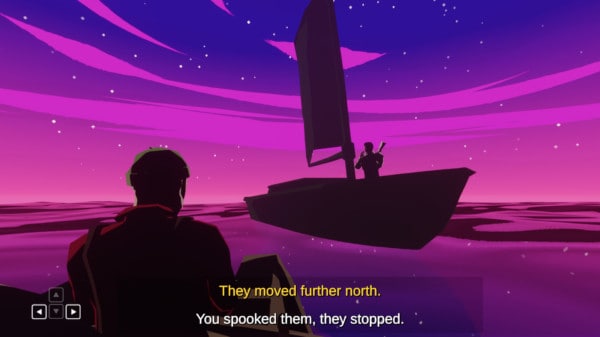 The author wanted to make something that would push people to stop and think. The moonlit sea, your trembling cargo, and the option to choose between various speech options makes the tale more immersive than just reading a book online.

Still, I would have preferred a little more action.

I wanted to feel like I had some control in this game. However, after playing through it twice, I had to concede that I was stuck with a specific script. The moment you realise that you have no control over what happens, the beauty of the game starts to fade away.

Still, for me, the Night Fisherman has it’s charm. This brief experience delivers a unique sense of danger between two men in an otherwise beautiful setting. Sure, the scenes that push too close to the game’s inspiration are a little annoying, but they probably won’t mean much to anyone who isn’t a cinema fan.

Plus, you have to give Far Few Giants a bit of credit. It’s difficult to build up a sense of hate for a character in around ten minutes. Yet you find yourself daydreaming of ways to push Churchill out of his boat within just a few moments of conversation. 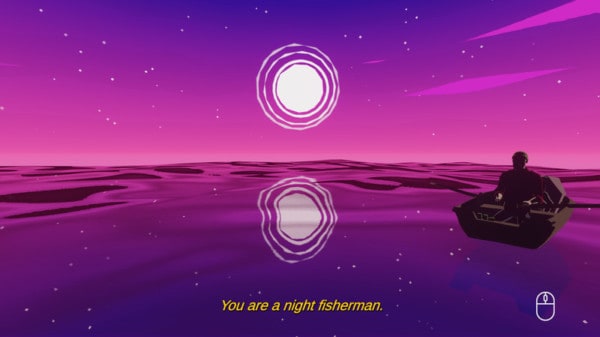 The Night Fisherman also offers an introduction into an appealing new storytelling experience for game lovers. If you enjoy the experience, you can also check out another similar piece in the collection, called “The Outcast Lovers”.

The Night Fisherman Review: The Verdict

This game is neither a relaxing bedtime story, nor an adrenaline-filled game. But it’s worth taking a look if you have a spare ten minutes. If like me, you like what you see, you can support Far Few Giants in their next creations by hitting their Patreon page.

If our The Night Fisherman review has left you wanting something a bit more action-filled, give Loop-Loop DX a try for some easy, arcade-style fun.