What is Star Trek Online’s best faction? It’s a question every new player will ask themselves the first time they launch this epic sci-fi adventure. Once you make your choice, it is permanent unless you decide to start a new game. It’s the first, and maybe most important choice you make when you play Star Trek Online.

There are six playable factions in Star Trek Online, split over two allegiances, Starfleet and the Klingon Defense Force.

The great thing about the Romulans and the Dominion, though, is that they are also capable of aligning with Starfleet. However, you will have to make the choice of which allegiance to choose at some point during their unique storyline. Making this choice will affect which ships your faction has access to from that point on.

For most players, your best bet is to choose the faction which has what you think are the coolest ships. Casual players are unlikely to see a huge difference regardless of your preferred faction.

If you love the ship design from the early days of Star Trek, then TOS Starfleet is your best bet. The classic saucer design of these ships brings up a great deal of nostalgia that fans will appreciate.

However, if you love narrative, and you want to maximize your access to general story content, the original faction (Starfleet) is your best choice. Star Trek Online launched with Starfleet set some years after the events of the last TNG film, Nemesis. So, it is not hard to see why this particular faction has the most content to explore. 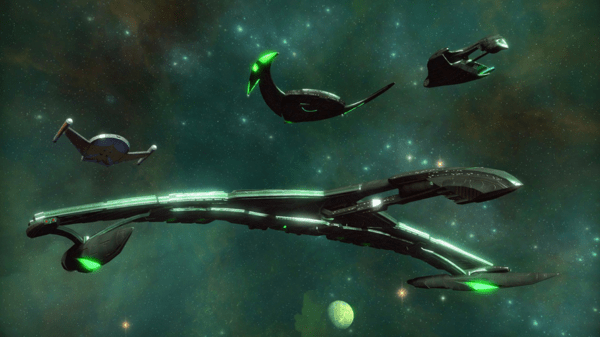 For our favorite pick, we find ourselves drifting toward the Romulans for a number of reasons. Not only can Romulans choose to ally themselves with either Starfleet or the Klingons, but their story arc is incredibly compelling! For those of you that love maximizing stats, the Romulans do have a slight DPS advantage over most of the factions.

It’s something hardcore players can take advantage of for the late game.  The only faction we wouldn’t really recommend is the Klingons. Not because Klingons aren’t cool. They have a limited available ship variety, and their story content isn’t as strong.

If STO isn’t for you, there are plenty of other MMOs to try. If you’re looking to build your own sci-fi universe, you might want to give Stellaris a try instead.