When I first came across Soviet Jump Game on the Steam Free to Playlist, I had no idea it came from the infamous Game Grumps.

The Game Grumps are some of my favorite content creators on YouTube, so I really couldn’t wait to check out their work here.

Created in collaboration with Fantastic Passion, Soviet Jump Game isn’t the first attempt at game production from the Game Grumps. This nostalgia trip follows on from the infinitely odder “Dream Daddy” simulator.

If you haven’t checked that title out yet, it might be worth a shot although it’s not free to play. 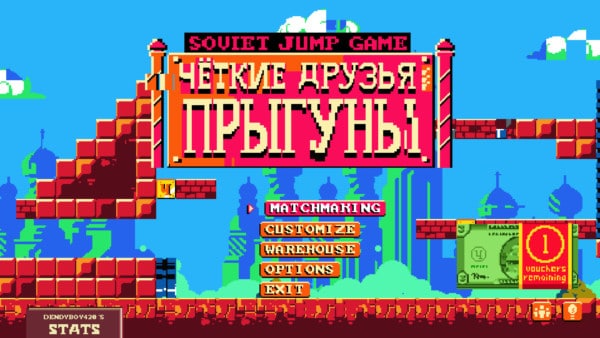 The experience is very similar to things like Super Mario. However, there are a lot of extra twists and turns to make the game more unique.

Let’s take a closer look, shall we?

The Game Grumps are incredible content creators. One of the things that makes them so appealing, is that they know how to keep their finger on the pulse of what their audience likes. In this case, we’re talking nostalgic pixelated gaming, mixed with a unique, retro-style battle royale mode. 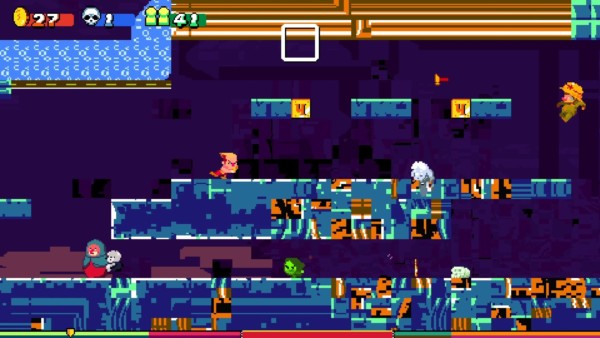 The game pits 50 players against each other in a quest to run, jump, and fight their way to victory. Each round exposes you to various complicated hazards until ultimately, there’s only one person left standing at the end of the match.

Usually, you’ll be able to complete a match in around five to seven minutes, scooping up weapons and pickups as you go. The great thing about this game is that chaotically fast-paced. You’re immediately thrown into the action, scrambling for weapons, and avoiding traps.

The more you play, the more you discover. There are dozens of weapons to encounter, and plenty of fun nods to previous games. For instance, you can jump on a co-player’s head to kill them.

It takes a little while to get used to everything in this game. There’s a lot to discover, and everything moves so quickly that you’re probably going to die a few times before you have a chance to figure out what’s going on. However, that doesn’t necessarily detract from the fun of the game.

The levels are packed full of brilliant designs. Parts of the scenery reminded me of that one episode of Community (Digital Estate Planning) where all the characters are competing in a game. 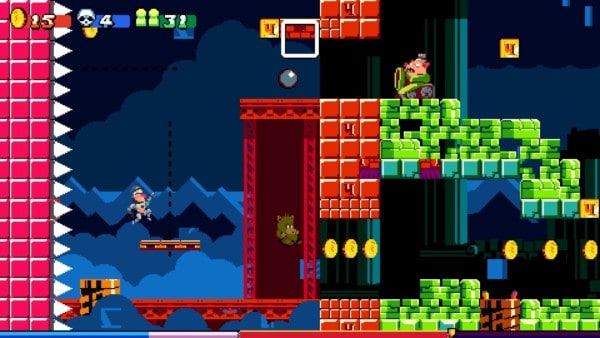 A Game That Doesn’t Take Itself too Seriously

Personally, I love the idea of well-known YouTube personalities branching out and putting their creativity to the test. The Game Grumps already have one successful indie game in their roster. Although Soviet Jump Game is a little more challenging, it definitely has a lot of potential.

If you like the idea of a Battle Royale formula, mixed with Mario Bros, then you’re in the right place. The beautiful 2D worlds are engaging, and the music helps to make the whole experience more immersive. The soundtrack is probably one of the most addictive things about this title.

Soviet Jump Game is challenging too. Not only are you fighting against dozens of other players, but there are countless other threats to avoid too. For instance, your 2D level infinitely loops, but if you spend too long killing your foes, the game begins to rush you. 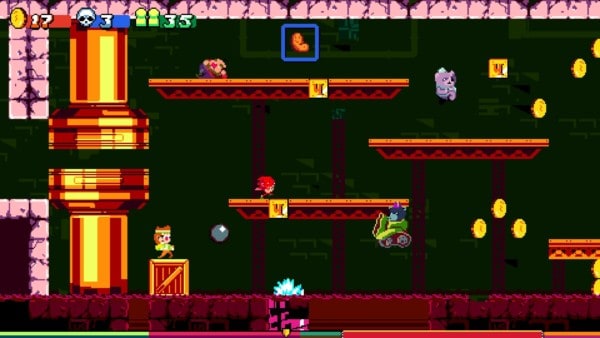 Spiked walls appear on both sides of your screens, and if you touch them, you die. This means that you can rest assured that no one match will last too long. There are also a bunch of normal enemies and hazards to overcome, like fire traps, spinning sawblades, and bottomless pits.

Honestly, while the challenge factor of the game might scare some players away I think it’s part of what gives it so much replay value. You begin to develop tactics over time for each level you explore and that’s satisfying in itself.

On top of that, the power-ups available from Soviet Jump Game make the experience even more impressive. As you might expect, you get things like fireballs, flight, and invincibility—similar to a standard Mario title. However, there are also power-ups for explosives, extra hits, and one that lets you transform into a tank and fire at your foes. 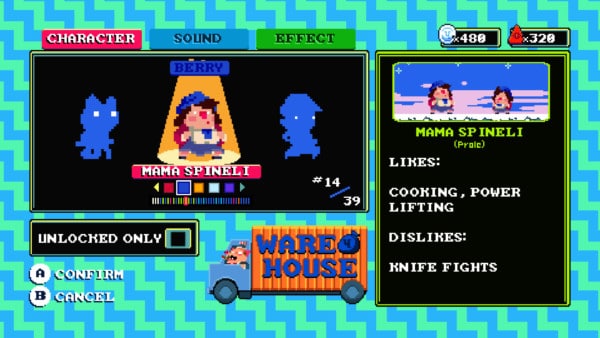 Combined, the countless stage hazards and fun power-ups mean that the game never gets boring and that’s a pretty impressive feat.

Some Areas Do Need a Power Up

Unfortunately, I can’t ignore some of the less awesome parts of this game just because I like the developers. There are still some problems with this title, and they’re really going to rub some people the wrong way. My advice? If you’re looking for a fully polished and pristine gaming experience, don’t start with Soviet Jump Game.

However, you could argue that these early-release style games are all about finding problems and fixing them. When you get access to a game for free, you can usually expect a few hurdles along the way. I expected the bugginess here but that didn’t make it any less disappointing. 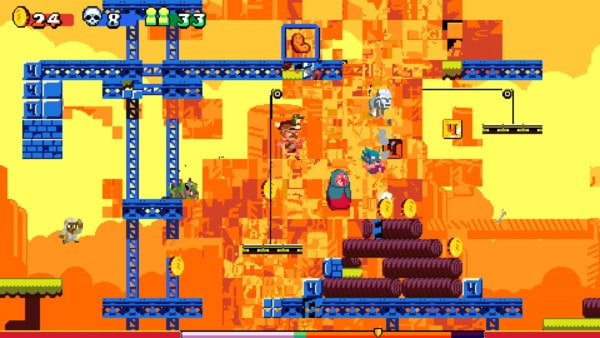 Lag is probably the most obvious problem that the developers face here. It’s not surprising when you’re throwing 50 people together in a highly active environment. Then there are the controls. Aerial control is basically non-existent, and it takes way too long to build up momentum when running.

Even the netcode is a bit problematic. Enter a section of the map that has more than a few players, and people start teleporting randomly around the screen. If you enter a pipe at the wrong time, you might even end up stuck in a black screen somewhere.

However, even with all of these flaws, you do get a very enjoyable gaming experience. If you go in without an expectation of absolute perfection, you’re pretty much guaranteed to have a good time.

“Russian” into The Next Stage of Development

Soviet Jump Game is fun, quirky, and brimming with brilliant humor. The fact that it has a few extra glitches is a bit annoying, but for me, it just feels like you’re playing a Russian bootleg. While some people complain about the graphics looking a bit too “glitchy,” I personally like the aesthetic. 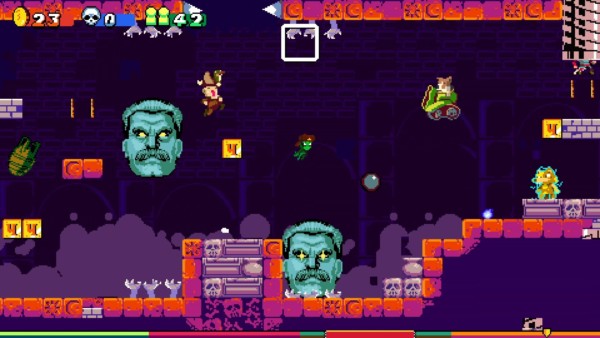 Micro-transactions are another area where Soviet Jump Game might use a few points. You earn coins in each game to unlock aesthetic options and bonus features. Eventually, you can even play as Arin or Danny from the Game Grumps team. While the game does regularly encourage you to spend real money, you don’t have to do splash out to win.

Ultimately, I’m stuck in a bit of a weird place with Soviet Jump Game. On the one hand, it’s a lot of fun, and I like the unique experience that the developers are creating. On the other hand, I’m tempted to avoid playing it again until some of the issues get ironed out.

With a little luck, this title will be much more impressive in a few months. Until then, make sure you’ve got plenty of patience and a good attitude if you’re going to give it a go.

For an alternative Battle Royale experience, try King of Crabs.

Ready to jump into Game Grumps’ free to play title? Get the game on Steam here.