I’m not ashamed to say that colorful things catch my eye.

That means games like Roller Riot check a lot of my boxes.

This free-to-play game is available on both Steam and iOS or Android phones. If you’re looking for a playful beat ‘em up game that’s all about timing and combos – I’ve got you.

When I first saw Roller Riot on Steam, I was expecting something similar to Streets of Rage. 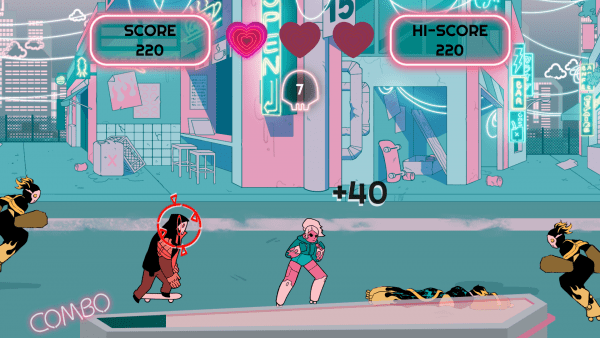 The actual experience is a bit different.

You don’t zoom through a creative environment in a set of digital roller-skates. Somehow, this game is still one heck of a ride, though.

Roller Riot is a pretty simple game to understand.

Enemies come from all directions, and you smack them down with your cyborg fists.

Similar to games like Guitar Hero, everything revolves around timing.

Swing too early at an enemy, and you’ll need a second to recover.

That means that you usually end up taking damage. 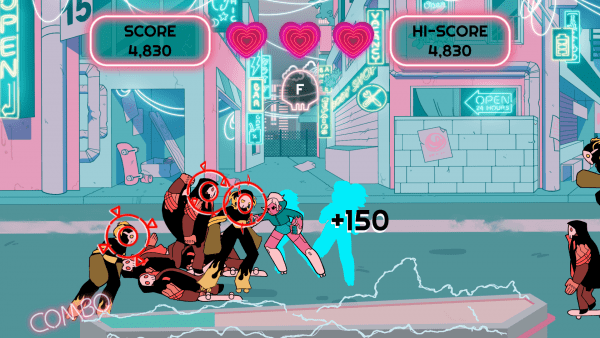 Swing too late, and an enemy could hit you first.

With only three hearts to hold onto, you need to be precise.

The longer you stay alive, the more you progress through the stunning streets designed by MassDiGI.

Each environment is a visual masterpiece. New locations deliver new adversaries to battle, including enemies that are tougher and harder to knock down.

The first few enemies just skateboard up to you, then wait around to be punched. As you get used to tackling those guys, the game starts throwing more challenges your way.

That includes enemies that can dodge, zip around the screen, or shoot fireballs. 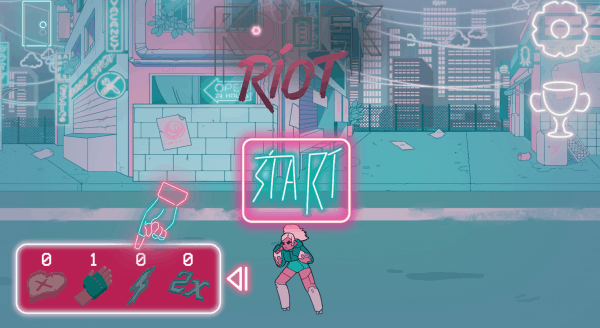 You learn how to duck, dodge, and weave between attacks as you progress into the game. At the same time, the difficulty curve gradually gets steeper.

Eventually, the hordes are sure to overwhelm you and send you right back to the title screen.

The good news? You can gather power-ups as you go.

Those power-ups give you extra hearts of health, a boost to your score multiplier, and other handy features. Unfortunately, you can only apply them by heading back to the menu page.

They See Me Rolling: Thoughts on Gameplay

Roller riot is a lot of fun if you’re looking for a basic game to keep you busy for an hour or two. It seems to be a lot more suitable for mobile play than PC.

The computer version of the title feels a bit like an afterthought. There’s no obvious way to pause play if you need to, and you can’t apply power-ups in-game.

Plus, the attacks are mapped to the directional buttons on your keyboards, rather than WASD.

If you play on mobile, you also get a lot more support when you die. Rather than having to start from scratch, you can choose to watch an ad and push further. 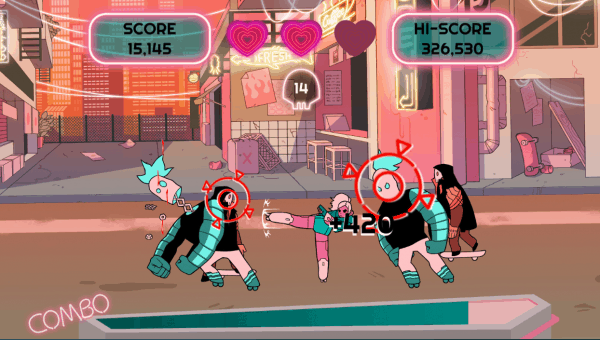 Still, even with the odd choice of buttons, I still found the game fun to play on either platform. Tapping on your smartphone screen to attack enemies is super-satisfying.

Hitting the buttons on your keyboard is great too, similar to playing an old-style browser game.

All the while, the aesthetic impact of the game makes it difficult not to fall in love. I love the almost fairy tale twist to this cyberpunk game.

Another thing that’s great about this game is that it’s challenging.

If you’re tired of games that are more likely to send you to sleep than get your adrenaline pumping, this is a good choice.

You need to learn how to perfectly punch, kick, and skate your way to the top, all with perfect punctuality.

Ducking and dodging quickly becomes just as important as kicking and punching at the right times. This means that though the game seems simple on the surface, succeeding at it means developing a decent amount of skill. 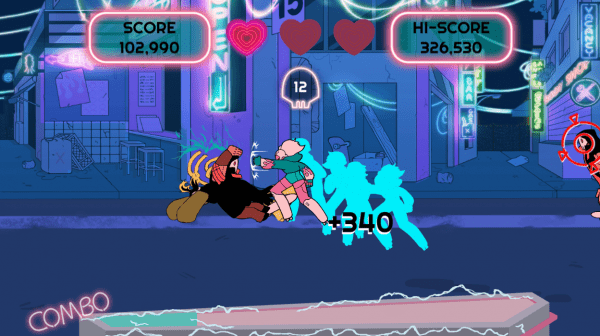 It’s the mounting pressure of hitting each button at the right time that makes it so satisfying to eventually reach the “Frenzy” mode.

During this stage, you can go on a massive rampage, knocking out dozens of bots at once, and earning some much-needed stress relief.

Appeal to Your Inner Arcade Nerd

I went into Roller Riot expecting something a little different from the timing-focused game I got. However, I don’t feel disappointed. This isn’t your standard side-scrolling arcade game. It’s a lot simpler than that. You can’t even access a multiplayer mode — at least not yet.

Fortunately, this is a game that still manages to check a lot of the right boxes.

From a visual perspective, you have that stunning arcade-style affair, complete with cyberpunk elements in attractive pastel tones. Audio-wise, the mellow electro beat is nice enough to listen to — although I would have preferred a bit more variety.

In terms of gameplay, Roller Riot is simple without being boring. 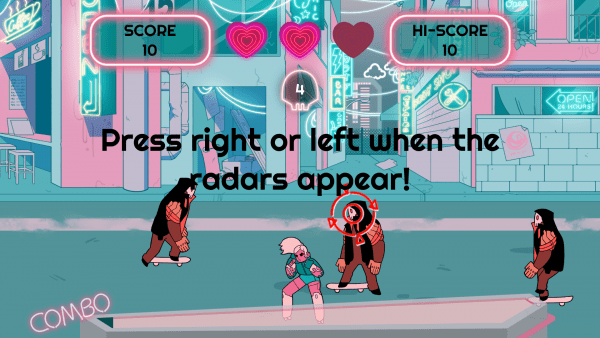 Even with no-one to compete against, you constantly want to push yourself to achieve a higher score. The promise of new enemies to discover, new backgrounds, and even unique power-ups keeps you pushing forward.

It’s not the most in-depth game that I’ve ever played but it isn’t meant to be. This is the kind of title that you can play for five minutes in between meetings at work. It’s a delightful little stress reliever and a fantastic homage to arcade history.

I loved the way that the game felt, and I’ll be playing more of it in my free time although I might see how it works on my home-made arcade machine, rather than using the PC again.

Check out some of our other free-to-play game reviews or just go and have a game of Roller Riot.