For our decision we decided to focus on the base game rather than bring the Iceborne weapons into the mix. This is for several reasons, not the least of which is that Iceborne is a paid DLC add on, and we don’t want to assume you’ve purchased that content. Also, it’s because Iceborne locks almost everything behind completion of the main game. As a result, no matter how you play, you’ll need a great weapon to carry you through the late game of Monster Hunter World, and the early Master rank missions of Iceborne.

Even without considering the expansion, there are several amazing Insect Glaives to choose from. It was hard picking just one. After serious consideration though, we feel that without a doubt, the weapon obtained from Nergigante, Catastrophe’s Light, is Monster Hunter World’s best Insect Glaive.

Take a look at those stats! A base attack of 651, 150 Dragon attack, High Elderseal, and tons of blue sharpness. It has neutral affinity, a decent Sever Boost for your Kinsect Bonus, and even a slot, which means there aren’t any obvious weaknesses to the weapon. 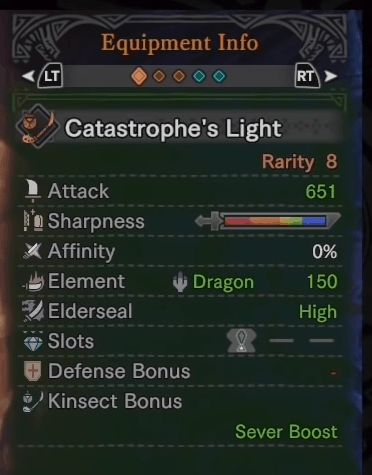 For master players, a mixed set might be exactly what the doctor ordered. However, for the sake of simplicity, we’ve decided to go with a single set of armor. In our estimation, the choice set to craft to support Catastrophe’s Light is the Odogaron α armor.

Odogaron α has a variety of skills that are almost tailor made for this weapon. Below are the skills in order of value to Insect Glaive users that a complete set of this armor comes with:

There you have it. Catastrophe’s Light and the Ogogaron set is what we think is Monster Hunter World’s best Insect Glaive build. While you hunt, capture, and investigate your way to the needed parts, make sure to review our other guides, you know, just in case you want to experiment with another weapon somewhere down the road.

Serious Focus in Warframe: How to Remove Lenses

Warframes and weapons can use focus lenses that can have significant impact on your stats and how you approach combat. Knowing how to spec...