Lately, I’ve been playing a lot of serious games.

Large open-world explorers, horror titles that force you to examine every detail of thousands of rooms. This week, I needed a break. What better way to blow off some steam than by going on a murderous rampage as a giant crab?

King of Crabs is a massive multiplayer game available for Steam gamers and smartphones. This early access game promises intense action with up to 100 players in each game.

From the first second you log in, you’re thrown into a cluttered island full of crabs, turtles, lobsters, and other sea life. As you gradually figure out how everything works, your competitive side takes over, and you start to hack and slash your way to victory.

Let’s take a closer look at the gameplay experience in our King of Crabs review. 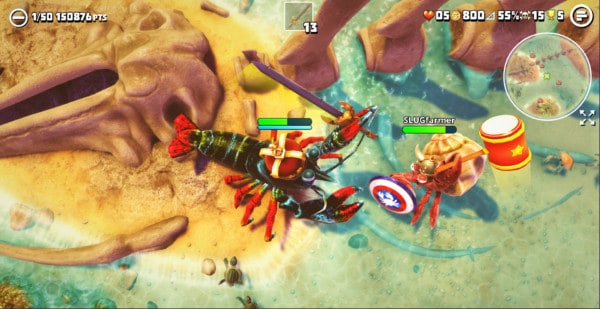 Competitive Gameplay to Make You Crabby

If you’ve ever played titles like Paper.io or Snake.io before, then you’ll feel 100% comfortable with King of Crabs. That’s good news, because King of Crabs doesn’t give you a lot of time to get accustomed to your new world.

Instantly, you’re thrown onto an island with dozens of other people, all hoping to kill you. Initially, you’re just a tiny, drab little crab. That’s pretty depressing when you consider all the colorful lobsters and other deep-sea creatures around you.

As you start to shuffle around your island, avoiding the bigger enemies that want to kill you, you’ll find characters that are a similar size to you or smaller that you can attack. The more you kill your competitors, the bigger your crab grows.

Another thing you’ll notice as you limp around the island, is that there are various weapons you can pick up to help you destroy your foes. We’re talking back-scratchers, bottles, swords – you name it. 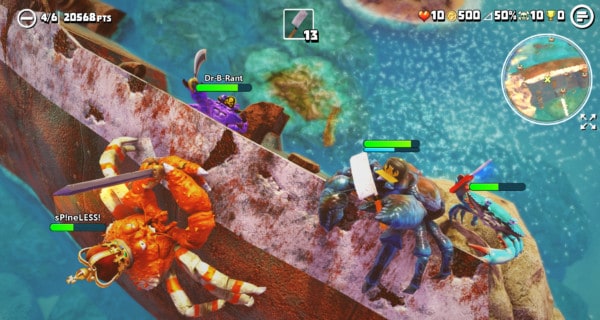 Killing other players and ranking up allows you to unlock new kinds of crab. The game encourages you to Crab them all. In my quest to become a more impressive-looking crustacean, I had the nagging feeling I was being taught something about different crab species…

Fortunately, the underlying lessons about crabs didn’t outweigh my desire to upgrade and customize my crab into something a little more exciting.

The developers for this game, Robot Squid, promise there’ll be other skins to collect in the future too.

Fun in the Sun and Multiplayer Madness

In terms of options for gameplay, you’ll have two modes to choose from: King and Friendly.

The Friendly game option is a good choice for people who don’t feel totally genocidal. Rather than trying to kill every other creature on the island, you play alongside fellow crabs to survive. On the other hand, with King mode, you have to hack and smash your way to the top.

King mode is definitely the most fun, but it’s also pretty chaotic.

The goal here is to keep chomping on your competition until you’re the biggest, baddest crab in town. 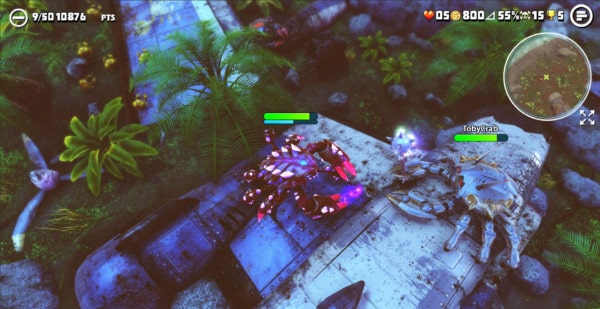 When you’re just starting in the game, I wouldn’t recommend targeting too many other players straight away. Ideally, you’ll want to focus on some of the AI-controlled animals that are wandering around the map. These guys don’t put up a fight.

As you get a little bigger, you’ll be able to tackle other crabs and lobsters.

While being a bigger crab does reduce your chances of being murdered in one hit by another player, it’s not necessarily a safe position to hold. The bigger you get, the more food you need to maintain your massive girth.

If you’re not eating all the time, your health bar is going down, which means that you’re constantly searching for new food sources. I honestly found this gameplay mechanic to be a bit problematic. Surely you should have some reward for making it to the top of the food chain, right?

The “slightly” good news is that the combat is simple enough. You can use multiple hits to create combos, which feels strangely satisfying. Additionally, flipping your opponent on their back is a great way to ensure your victory.

When you’re tired of using your claws, you can grab weapons to help you out. The weapons are actually some of the most appealing parts of the game.

Keeping an Eye Out for Treasure

There’s more strategy involved in this game than I initially expected.

You can jump in and tried to kill as many other players as possible if you like, but you’ll probably die quite quickly that way. The better option is to figure out how to balance yourself between well-timed retreats and regular death battles. 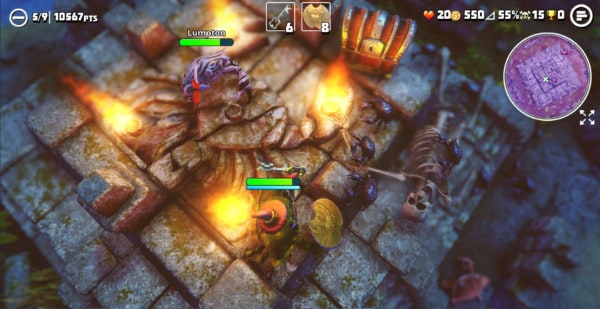 When you’re not killing other players and eating wildlife, you can also spend some of your time looking for treasure chests around the island. These creates are breakable, and they come with things like extra lives and weapons to give you a head-start in the game.

Unfortunately, the treasure chests aren’t particularly easy to get into. You need to devote some serious time and effort to opening one. If you’re a smaller crab when you happen across a chest, it might be better to run than risk being attacked.

King of Crabs is a pretty fun game at first.

Sure, you’ll probably die a lot, but you can revive yourself if you have an extra life, depending on your size. When you do end up back at the main menu, you’ll have some points from your time on the island. You can use those to unlock skills for the crabs you already have.

Coins are also available, which you can use to purchase new crabs. Each of the crabs in the game has it’s own level-up pathway. That means that you can make your favorite grab as big and strong as you like. There’s also the option to buy coins for real cash in the mobile version of this game.

Unfortunately, despite the initial appeal of this game, I found myself losing interest quite quickly. There’s a lot of lag involved in a massive multi-player game like this, which means that you’ll end up losing lives for almost no reason.

Plus, everyone else you play with seems to be cut-throat. It seems as though some players deliberately hang around to kill new players. On top of that, the controls take some serious getting used to at first.

King of Crabs Review: The Verdict

King of Crabs is a playful, quirky game designed to give you some chaotic fun. Initially, the experience is pretty engaging. The scenery is beautiful, and the promise of being able to upgrade your crab with new weapons and skins is alluring. 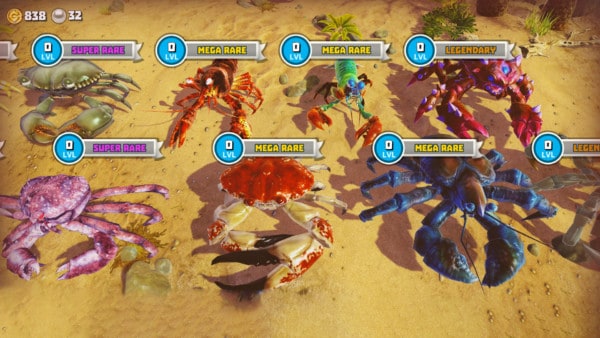 Each crab also has passive skills that you can gradually improve as you play, which means that you do get invested in each character you use.

Unfortunately, there’s still too much wrong with this game for it to be a real winner in my book.

Gameplay often feels drawn out and stressful, particularly when you’re in a match with dozens of other people. All of the crabs handle the same way, so there’s limitations to how awesome you feel even when you have an ultra-rare skin.

Plus, like most massive multiplayer titles, lag and bugs are a constant problem. For a free to play game, this title isn’t terrible – but it’s probably not something I’ll be picking up to play again in the future.

If you want something a little different, give Enemy on Board a try. Otherwise, you can play King of Crabs for free here.