For better or worse, nuclear bombs or “nukes” have been a part of our history ever since World War II.

Since Hearts of Iron IV focuses on WW2, they do exist in-game as well. However, like everything else in grand strategy games, it’s worth spending some time to learn how to use nukes in HOI4 effectively.

Most players expect nukes to work like they do in the real world, but are disappointed. The effects on population and troops are not as severe as one would expect, and the consequences focus more on the game’s dynamics.

How do I get nukes in the first place? 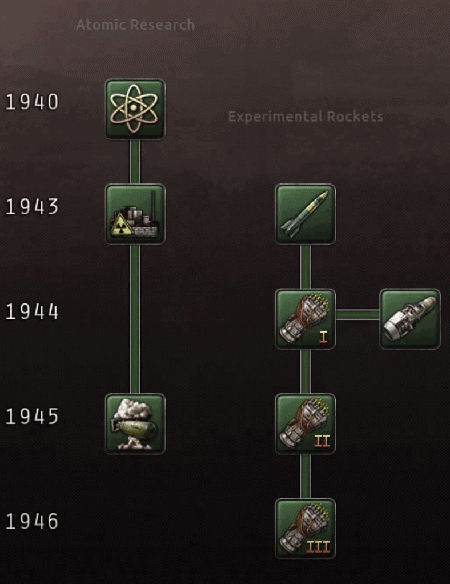 No need to be proficient in physics and chemistry! You still need to do some homework, however.

In particular, you need to have specific technologies for the skills, resources for the actual building, and aircraft to drop them.

The technologies you need are Atomic Research, Nuclear Reactor, and Nuclear Bombs. These are all from the Engineering group, and each one depends on the previous one. In other words, you can only build bombs if you have reactors, and you can only have reactors if your country has the proper atomic skills.

This is all a pretty slow process. The base research time is close to 1500 in total, but you can speed it up a little. All you have to do is hire a theorist with the Nuclear Scientist or Nuclear Enthusiast trait.

Moreover, every reactor can only build one bomb per year. Mass destruction requires lots of patience… or cheats.

Indeed, you can use the nuke console command, as we explain in our HOI4 Console Commands list, to immediately make any amount of nukes available. Note that all other rules detailed below still apply.

Ok, I have the bombs. What else do I need?

Before you can use your nukes, you need to ensure that your relationship with the recipient is bad enough. That means that you have to be hostile to the country that controls the province you want to attack.

Also, since you will be dropping the bombs from the air, you must have an Air Superiority of 75% or more for that area and bring a Strategic Bomber plane nearby. That is the only kind of aircraft that can drop nuclear bombs, as Tactical Bombers are not enough.

One special tip if you’re struggling with that Air Superiority requirement: you can bring any airplane you have into the area you want to nuke. It doesn’t matter what kind of plane it is, what range it has, or what it’s doing. That’s because every single plane in the area helps to increase your air superiority.

All requirements are met. How I drop the nukes? 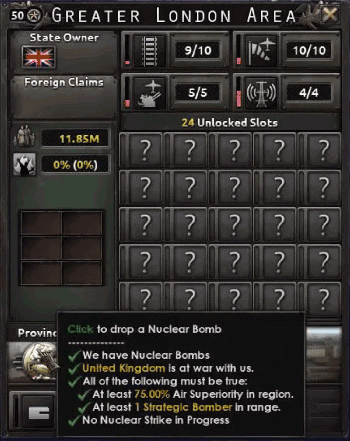 It sounds like someone really wants to see the world burn! Or at least, the world in a video game. After all, we’re here to explain how to use nukes in HOI4.

Dropping a nuke is done from the Default Map view. Press F1 to switch to it if you’re using another view.

All you have to do is click on the province that you want to attack, and then the nuke icon at the bottom of its window.

Oh, and you have to wait. Patience is key, remember? What you just did was order that the nuke to be dropped, but it will take another 12 in-game hours for it to actually explode.

We agree, it’s a little disappointing. But do remember that HOI4 is a grand strategy game, so it makes sense that all actions must be planned in detail rather than just improvised.

The nukes went off! But… it didn’t really destroy things! 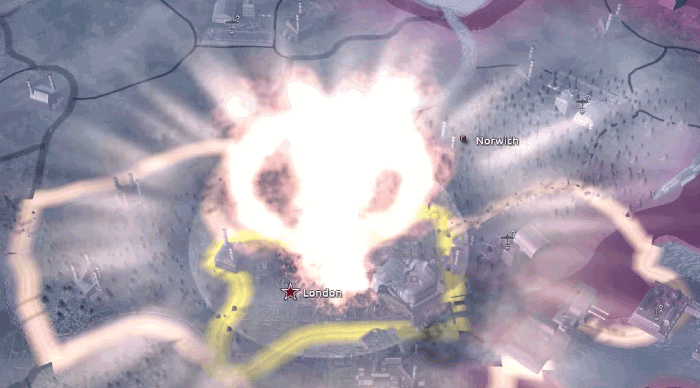 Remember when we said that some gamers are disappointed when they learn how to use nukes in HOI4? That’s because, once again, this is a grand strategy game. The effects of a nuclear bomb won’t be as dramatic as in an action game, despite the pretty cool animation. Rather, they have consequences on how they affect the other parties.

Also, the airplanes in any airport or airfield in that province may be destroyed.

Moreover, war support on the bomb recipient will be reduced by as much as 20%, depending on how badly the infrastructures are affected by the nuke. This, in turn, makes surrender more likely.

Note that if you nuke Japan twice, the country will surrender.

I still see enemy troops in the province, how can it be?

It’s worth remembering that the game is set in the years of World War II. At the time, the field of nuclear energy was in its infancy, and the bombs had limited power. Hiroshima’s “Little Boy”, for instance, had a blast yield of 15 kilotons, and the area affected by the blast was about 3 km from ground zero.

It makes sense, then, that while troops may be wiped out near the exact location of the drop, other troops as near as a few kilometers may not be directly affected. That’s because, at this time, the game does not take radiation and other secondary effects into account.

Is there any way to make the nukes more realistic?

Sir, yes sir! All Paradox Interactive games are well known for the extensive community of modders, and HOI4 is no exception.

There is one such mod, unsurprisingly called “Realistic Nukes” on the HOI4 workshop, which makes nuclear bombs more destructive. It’s a non-standard mod and it may change as the author updates it, so we encourage you to read about its current status if you are interested.

Is there anything else I should know about how to use nukes in HOI4?

By now you have probably figured out that nukes in HOI4 are not an easy and quick solution to handling conflicts. They take a long time to build, and their effect is not as deep as players would hope. Especially at the beginning, they are more frustrating than anything else.

Later on in the game, however, they can indeed make a difference. If you are able to build nukes quickly enough by having many reactors, you can use them over and over to weaken even the strongest opponent.

As with everything in HOI4, there is no single best approach that always works. Every player, and indeed every game, is a different story.

Isn’t that why we play these games, after all?