Fall Guys: Ultimate Knockout is a trending battle royale game presently in the online gaming community. There has been a considerable buzz on the internet since the game’s release, and as time passed, numerous gamers are still obsessed with the fast-paced multiplayer game.

This game might seem relatively easy with simple mechanics and graphics (don’t be fooled by the colorful and cute jellybean characters!), but the overall gameplay is quite complex. The player to become the last man standing while completing tasks and minigames is crowned the winner.

As the name of the game implies, you need to “knockout” your enemies to win the game. The controls of the game being really simple, even the most amateur Fall Guys players might win with luck. However, there are a few factors you can keep in mind to gain an extra advantage over your opponents, one of them being pushing your enemies.

Before we answer your question on how to push people in Fall Guys, let’s understand the gameplay first.

Bonus read: Are you a beginner in Fall Guys: Ultimate Knockout? Scan through this beginner’s guide to master the game in no time!

The Gameplay of Fall Guys 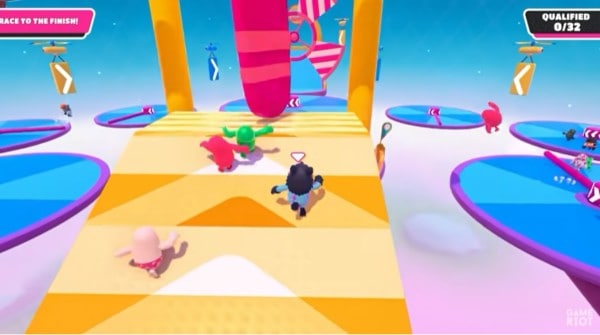 The gameplay mechanics of Fall Guys is quite simple and belongs to the battle royale genre of online games. In this game, 60 players worldwide join a lobby for each match, and all players have only one target – to survive among the competitors and be the last person standing.

A jellybean-like figure represents each player, and they need to move around in a three-dimensional simulated environment. Other movements like jumping, grabbing, pushing/pulling, or diving will help players advance further in the game. All in all, to survive, all players have to pass through all rounds of minigames.

Some minigames include running towards the finish line as marked on the map, playing tag with other contenders, and various teamwork tasks. To make the game more difficult, each minigame has a fair share of obstacles. This makes the game more challenging, and thus more players are hooked onto the path to clearing levels.

Till this point, the game seems pretty straightforward, right? Well, to make things more complicated, there are many elimination methods in every step of the game. For example, slow players fall into the pink slime and are immediately disqualified.

In the final round, the remaining players compete in a final match, comprising a random minigame with few players. The master surviving through all the games wins!

The in-game currency in Fall Guys is known as “Kudos”, and players can buy new cosmetics and emotes for their characters. Players who win the game till the end get rewarded with “Crowns”. In contrast, the ones completing individual matches get rewarded with Kudos according to the number of minigames completed.

Furthermore, there is also an option of microtransactions or buying in-game currency with real money. In the most recent season, the “Crown shards” currency was introduced, and it can be earned by playing in the squad mode or by completing daily challenges. What’s best, these crown shards can be traded for crowns to buy more in-game goodies!

How to Push People in Fall Guys

Now that we have got a clear synopsis of the game let’s go back to the real question: “How to push people in Fall Guys.”

As stated earlier, you need to have some tips and tricks up your sleeve to win the game. Among all the tricks, pushing/pulling people during the match can help secure your chances to be number one.

Keep in mind, you can only push or pull someone if you grab them first.

Here is how you need to do it on both Window’s PC and PS4 platforms. 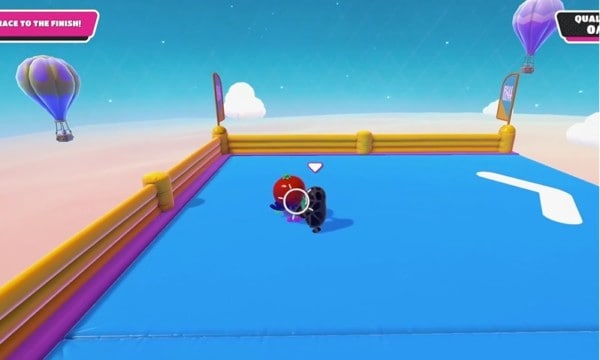 If you are playing the game on a PS4, you first need to go towards the player you wish to eliminate. Once you get close, a white circle will flash near the targeted person. When you see the flash, press and hold the ‘R2’ button on your controller to help your character extend their arms and grab the target. 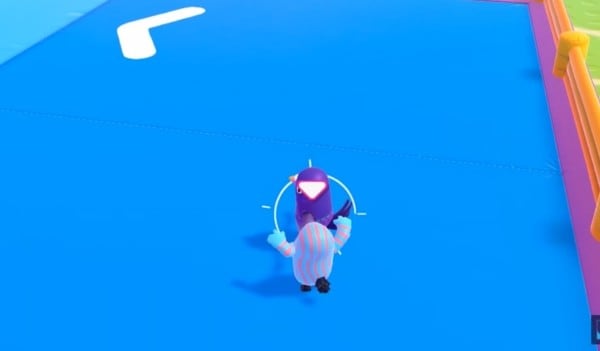 If you play the game on a Windows PC, the method is almost the same as playing on a PS4. You just need to go towards a player and wait for the white circle to appear. Once you see it, grab the player by holding the ‘Shift’ key on your keyboard.

Next, you can push them forward by pressing ‘W’ and releasing the ‘Shift’ key on the keyboard to eliminate your opponent. Similarly, for pulling the target, press ‘S’ and release shift on your keyboard to slow them down.

Gamers can also change the default input keys of the game on the PC version by clicking on the options box in the settings menu.

Benefits of Pushing and Pulling Players

Since there are not many actions that you can do in the game, so each slight movement or action you make counts. However, against 59 other players, these subtle movements don’t have much benefit, other than being annoying or trying to ruin your opponents’ momentum.

Ruining others’ games can sometimes be hilarious, and most people do it just for fun. However, you might get slowed down while trying to annoy other players and can also get eliminated by such mischievous in-game behavior.

It must be kept in mind, that Fall Guys is mainly a team game and that you will be randomly teamed up with gamers present in the lobby. For that, you need to be a team player and focus on using the tricks like pushing or pulling only when necessary for the benefit of your team.

For example, if an opponent is stealing and tries to throw the eggs from your base to theirs. Try grabbing and shaking them down as this will lead to dropping the eggs and thus protect your base.

Similarly, for the tail-chasing game mode, where players are provided a set number of tails per team, getting hold of an opponent through their tail can help your team win without fail. In this way, you can stagnate your opponents, help your teammate close in, and steal the enemy’s tail.

Bonus Read: Having trouble with the new heist in GTA 5? Check out this detailed guide about the new Cayo Perico Heist, and you’ll be breaching the island like a top-notch spy.

How to Avoid Being Pushed in Fall Guys

Till now, we have discussed how to grab, push and pull other people to help you win the game. But you are not the only one who will be using the same technique to win, so you need a worthwhile strategy to avoid being pushed by other players in Fall Guys.

There are different tips for avoiding such situations, as scenarios will change with varying maps, and you need to improvise accordingly. For example, many people will try to grab you in the Block Party map, and you can get eliminated if unable to counter them.

But if we are talking about a generic strategy, try to keep a gap between yourself and the other players, especially if they are facing you or standing next to you. If you see yourself getting cornered while running straight towards the destination, try not to run directly to that location and stay still for a moment. This will throw the other player off guard, and you can take advantage of the situation.

Also, it is essential to try and position yourself safely in case you get grabbed by another player. You can free yourself by jumping continuously, so make sure you have the time to jump and break the grab without dying.

For example, in Block Party, it is better to stand closer to the front than the back. Mainly because it serves two purposes. Firstly, you can see the blocks coming sooner and plan your next move accordingly. And secondly, staying near the front helps you gain time, and even if you get grabbed, you can free yourself without losing extra time.

Pushing Players or Freeing Yourself in Fall Guys: Tips and Tricks

Now that we have discussed how to grab and push people and free yourself from a similar case, these strategies might feel challenging to implement, right? For that, you need to learn how the game works. Here are some tips you should keep in mind while trying to grab someone or escape from a grab.

Not to forget, Fall Guys comprises three sets of actions – jumping, diving, and grabbing. As easy as it seems, you must familiarize yourself with the controls first. In contrast with other games, the small nature of the jellybeans can make them annoyingly hard to handle.

The jelly-like nature of the characters makes them more prone to fall over or trip. However, if you can control or understand the physics behind where and how the character is stumbling, you can have a massive advantage over others. For example, using grabs or pushes at the right time can help players from falling off ledges or even steal goodies from the enemies.

Grabs are a crucial part of the game, and they can determine the difference between qualifying or losing the next round. Most players assume that grabbing must be performed in ‘grab-centric’ levels only, like Egg Scramble, Royal Fumble, and Tail Tag, but grabbing can help you pull yourself back on track and instead push opponents down.

Experienced players rely on finding shortcuts to complete the minigames fast. When people start lagging, they begin to rely more on speed panels to cover the distance quickly. However, in minigames like Dizzy Heights, these speed panels might get you swiftly eliminated.

Jumping is another imperative aspect of Fall Guys, as players need to time their jumps while jumping from ledges, dodging objects, or even escaping from a grab. However, unlike other platformers, some player avatars have large bodies and stubby legs. Thus they can’t jump easily.

You also need to keep in mind the momentum and placement while attempting to jump.

Most of the minigames require spatial analysis.

For example, you need to assess the distance between one ledge to another before jumping, or you need to maintain some distance from your enemies so that you don’t get grabbed. Additionally, staying too close to an enemy group can lead to your elimination.

To summarize, it’s clearly seen that despite having simple gameplay and graphics, Fall Guys does require a bit of practice to understand every aspect of the game and march towards glory. The part about grabbing and pushing is straightforward. However, you need to get acquainted with the controls for better results.

Following the tricks mentioned above while pushing or pulling will influence how you play and assist in acquiring a healthy advantage over opponents. These tricks can also help you effectively perform all the additional movements like jumping, grabbing, and diving.

Now that you have an advantage over other players with these tips in hand, jump in and aim to be the last bean standing!

Bonus Read: Want to download Valorant on PC? Here are seven easy steps to do so.