Hyper Scape is a first-person shooter game developed by Ubisoft Montreal and published by Ubisoft, which is known for creating award-winning games like Rainbow Six Siege, Assassins Creed, and Far Cry.

It is a free-to-play, fast-paced battle royale-style game that is available for free on PC through Uplay, PS4, and PS5 through PlayStation Plus and XBOX Series X/S and Xbox One through the Xbox Marketplace.

Hyper Scape takes place in the year 2054 in Neo Arcadia, a part of a metaverse created by the in-game tech giants Prisma Dimensions. Here, players battle each other in a sport known as Crown Rush.

Ubisoft has rolled out a new update for Hyper Scape, and with Patch 2.5, the new cross-play feature is available for players on different platforms.

Currently, they offer full cross-play between consoles. However, a single PC player in the party will put the entire team in a PC matchmaking pool. PC players can play with consoles by invite only.

PC players will be able to join a complete cross-play pool when the gameplay is more balanced. This ensures that the games are fair. Ubisoft and the Hyper Scape team are constantly working on new updates to remove bugs and give the players a smoother gaming experience.

How To Cross-Play Hyper Scape?

Let’s look at what we need to get started and some tips to boost our gameplay in Hyper Scape. These tips will ensure that you have a wholesome experience while playing the game: 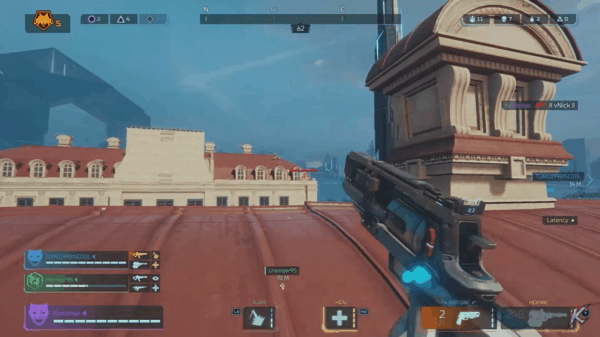 First, understand the basics of setting up a game with your friends:

Ubisoft still needs to streamline the process of adding friends, but all in all, it’s an outstanding feature and can hopefully increase the lobby size for Xbox and Playstation players.

Here are some tips to troubleshoot if you’re unable to add or join a friend:

Gamers can enjoy utmost convenience with a plethora of new updates and features such as:

Ubisoft has finally announced cross-play for Hyper Scape. This means that PlayStation and Xbox players will get to play together in the same matchmaking pool.

With cross-play compatibility, Ubisoft aims to reduce the lobby waiting time between games and increase the number of players in each match. It has been added to both modes, the crown rush battle royale and team deathmatch.

PC players are out of luck presently as they won’t be able to play with non-PC players in general matchmaking. Currently, the cross-play option is turned on by default for PC players and cannot be disabled.

Hyper Scape is a first-person battle royale game with a unique twist. Live streamers on Twitch can affect the outcome of a match by voting.

Players can find weapons and abilities on the ground which they can use and upgrade throughout the game. Abilities allow the player to turn invisible, reveal enemy locations, or teleport, making the game a stealthy entertainment experience.

Streamers can vote on which modifications are to be made by the in-game AI host. Modifications include features like infinite ammo on all guns or turning on a low gravity mode.

This game requires a combination of quick navigation and a sense of verticality that will only get enhanced the more you play the game. It is a quick-action battle royale that gives you the capacity to chain abilities to escape or attack.

The skill requirement for the game is slightly high, and the action kicks off as soon as you land on the ground. This means that the first few games for a newcomer will be challenging, if not overwhelming. These attributes make it a challenging experience for newcomers who play Hyper Scape.

The game has finally added a new ranking system for players. This starts from bronze, silver, gold, platinum, diamond, and finally, the champion rank for players to conquer and show who the boss player is!

Hyper Scape also offers a new free-roam mode called the Arcadium. Here, players can explore and also train by shooting the enemy AI who are roaming the city.

This new model will help amateur players grasp the game’s shooting mechanics and play style without affecting their rank.

6. Tips and tricks to quickly improve at Hyper Scape

The long-awaited cross-play feature will bring tons of new competition to Neo Arcadia. Let’s take a look at a few tips that will always keep us a few steps ahead of the competition:

For anyone looking to play a fast-paced battle royale game, hyper scape is the one to go for. This game checks all the boxes for a gamer who prefers the first-person shooter. Combine this with its twists, and you have a highly immersive gaming experience.

The cross-platform feature will only make the game more efficient by reducing waiting time and adding more players to a game. You can now play with a friend regardless of which platform they play on!

Though the game has a difficult learning curve, the developers are in tune with the community. They are always working toward making the Hyper Scape experience a smooth one for beginners and professional players alike.