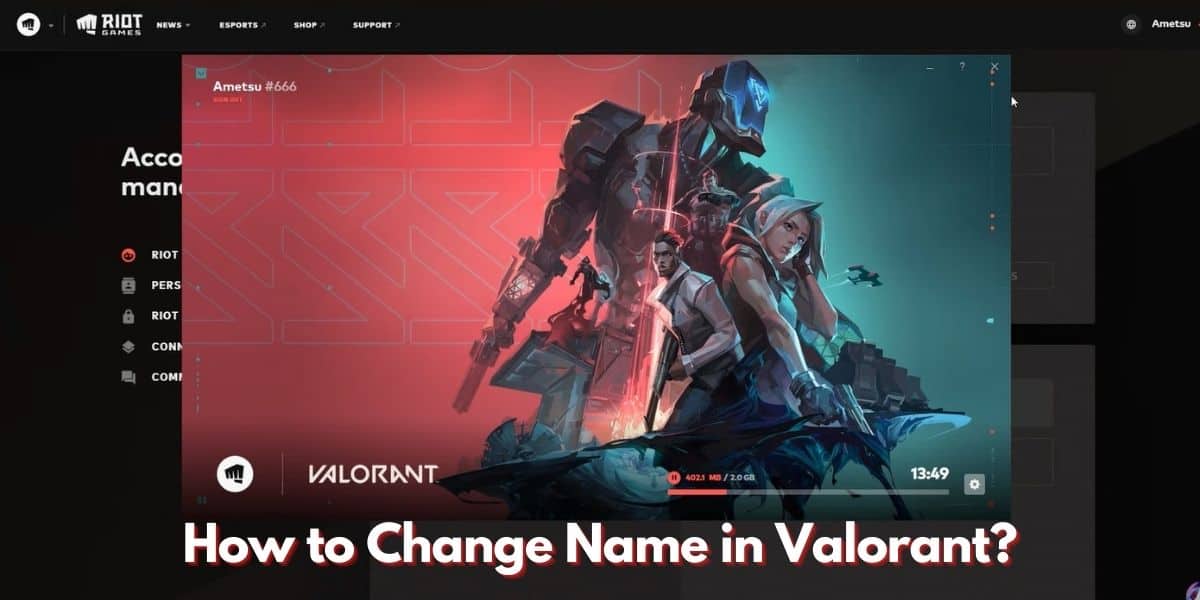 Valorant has developed into the most competitive shooter on the PC over the past year. This means gamers can make a reputation for themselves in the budding Valorant scene. To do that, an alias that distinguishes certain players from their opponents is necessary.

However, unsatisfied players who desire a new name will have to transform it into something more identifiable. The procedure to change the name in Valorant is unfamiliar to most even though it is easy to do. That’s where we can help the readers!

In this guide, we’ll teach the readers how to change their name in Valorant, but before that, we need to give a brief description of Riot Accounts or IDs.

What is a Riot ID? 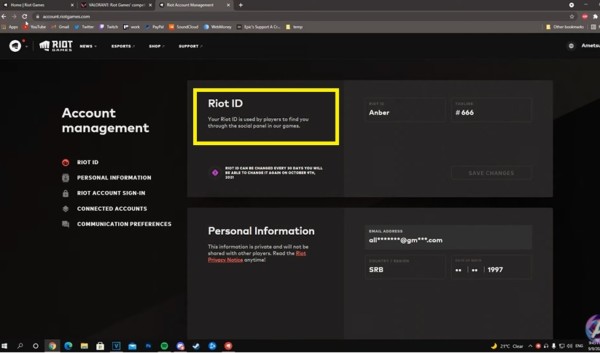 The term Riot Account or ID might sound familiar for those who’ve previously played games developed by Riot. To explain for those who haven’t, players use Riot IDs for accessing games made by the company, such as League of Legends, Teamfight Tactics, etc. A singular account can bring access to every Riot game. This saves the players from the hassle of creating a new account every time.

The Riot ID consists of the gamers name and a tagline. Because of this, players can have the same name but can distinguish themselves with their tags. Remember, a tagline includes four characters, including letters and numbers. They aren’t visible to anyone, but players need it to send someone a friend request in Valorant.

Coincidentally, the Riot ID directly translates to the name displayed in Valorant. This means that to change a player’s name in Valorant, they need to convert their Riot ID to their desired alias.

Now, we’re going to teach online gamers how to change a Riot ID which converts into a brand-new profile name for Valorant.

How to Change Name In Valorant Using Riot ID 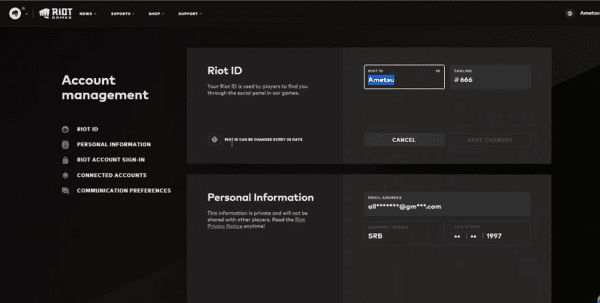 The procedure to change the in-game ID can be straightforward, but there aren’t any mentions of it anywhere in the game, leaving players disoriented when they desire to do so. Let us explain how to change your username in Valorant using the Riot ID by following these steps:

Congratulations! We’ve successfully converted the name on display for everyone to gauge their eyes

at! Examine the profile thoroughly before changing it because it’s impossible to revert it instantly if anything goes wrong.

Unsatisfied players would have to wait 30 days to change their Riot ID and Valorant name. Thus, don’t go ham and try to use a new name every day. Also, don’t put anything offensive or vulgar on the Riot ID. The website won’t allow it, and even if they do, it might result in an in-game ban.

However, titles below the username can be changeable, and there’s no cooldown on it! Read more to find out about titles and how to use them.

Bonus Read: Finding it difficult to shoot heads in Call of Duty? Check this guide on how to aim better in Warzone.

How to Use and Get Titles in Valorant 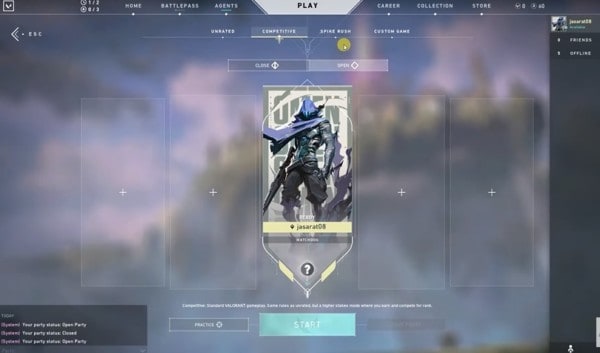 Valorant profiles have super-cool titles below their usernames to describe and give identity to a player. If you’re feeling an irresistible urge to get one for yourself, we’ve got you covered!

To use these titles, go to collection and look at the bottom left, which says to choose a title. Click that to get a list of titles for you to pick.

Players mainly achieve titles through completing certain tiers of the battle pass. These usually contain some funny and quirky titles for players to use. Get titles of a character by clearing agent contracts on the agent menu.

Some titles are exclusive to some players in the game, so you might miss out on a couple of them. Titles aren’t the only thing that is customizable in-game. Let’s talk about more profile options, starting with player cards to use in Valorant.

What Are Player Cards in Valorant? 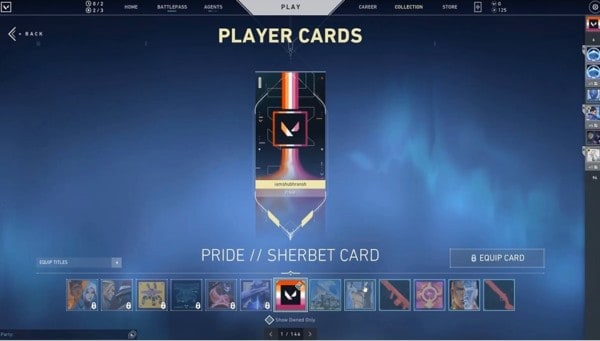 They’re like social media profile pictures. Players represent these banners while queuing up on the main menu. Moreover, they give a unique identity to the game users.

Gamers can show love to certain characters, maps, and guns by using these specific player cards.

To change player cards in Valorant, choose collection on the top-right of the main menu and click the image on the left side of the screen. This gives access to a variety of cards to view. Scroll the boxes on the lower end to select a player card. Choose the one that suits you best.

How to Unlock Player Cards in Valorant

Most player cards are achieved by gaining experience. Simply put, it’s gained by playing the game and completing the daily and weekly objectives. Gamers can unlock agent-specific cards by fulfilling the contracts of the characters on the ‘agents’ section on the top left. We also gain cards by purchasing the battle pass and finishing the tiers.

Certain cards are complementary while purchasing skin bundles in the Valorant store. We can buy them separately if buying skin bundles isn’t someone’s preference. Remember, all players’ cards available now will be unattainable in the future, making them more tempting to unlock right away.

Additionally, cards are observable as banners on the main menu. Teammates and opponents in-game see the player card during the loading screen along with the player’s name, levels, and their previous act rank.

Unfortunately, these aren’t always good when showcased to random enemies and teammates in the game. Therefore, players hide them by following certain steps.

Bonus Read: Confused on which rendition of Rico Rodriguez to play? To decide, read this spoiler-free article comparing Just Cause 3 and 4.

How to Hide Player Levels in Valorant

To avoid this situation, Riot has given gamers the power to hide their player level in Valorant. Just open Valorant, go-to collection, and click on the player card. There’ll be a choice to choose level borders on top, select that and disable ‘Show player level on my card’.

Following these steps will help eliminate the player level from the user’s profile and makes it invisible to random players. Other than that, we can also show the Act Rank to different opponents. The term Act Rank might be unheard of for those who haven’t explored the competitive mode in Valorant.

What is an Act Rank?

Playing competitively in Valorant gives players the opportunity to fight against similarly skilled players for ranking points. Players gain or lose points depending on their wins and how they perform in-game. Above this, ranks in this shooter range from Iron to Radiant.

The rank shows how skilled the player is when matched up against other opponents. For every act, the rank slightly resets and Valorant users get an Act Rank. It showcases how well the player did last season. Although it is a fantastic way to see how players have progressed, players use it as fuel to slam opponents.

Therefore, it’s better to hide the rank to avoid giving teammates and opponents an indication of how the competitor played the last act. Let us showcase how to keep the act rank non-observable for different opponents.

How to Show or Hide Previous Act Ranks in Valorant

To not give information to any players on your previous rank accomplishments, follow these steps to hide the act rank in Valorant:

The rank will be visible to other players during the loading screen in the competitive queue if it’s kept checked. Keeping it unpicked will keep the Act Rank invisible to the players regardless of how much you play.

What are Sprays in Valorant?

Players use sprays as stickers to send a message or simply for in-game entertainment. They’re stylishly enchanting to use. Think about it, there’s no better feeling than getting a kill and spraying a sticker on the ground.

Note: There’s an extensive selection of stickers to pick from, but they must be unlocked.

The default keybind to spray in Valorant is ‘Y’.

There are three types of sprays to use in-game: Pre-round, mid-round, and post-round sprays.

Pre-round and post-round sprays include GIF-like animated sprays. But such animated sprays are unusable mid-round as they can distract players mid-game.

Here’s how to switch to a variety of sprays in Valorant:

Unlock prays through the battle pass, agent contracts, or by directly purchasing them through the weapon bundles. Use the ones that suit you best and keep spraying in-game!

Unfortunately, people get opponents that are explicitly toxic to them. To neutralize this threat, players can keep their usernames hidden against random players for better privacy.

How To Hide Usernames in Valorant

Valorant introduced anonymity to cater to people who stream the game. This denies opponents the knowledge that they’re streaming, giving enemies an unfair advantage if they choose to watch. But it also comes in handy to prevent others from seeing your username.

It’s possible to hide the opponent’s username if you’re not interested in knowing about them while gaming. This allows players to play the game, causing no unprecedented ruckus pre-game.

Here’s how to hide usernames in Valorant:

With this, players can’t see the username during the game. The game will replace the username with the agent’s name selected by the player to avoid confusion.

Note: Players can see the ID of a hidden player in the Match History after the game has ended.

To summarize, we’ve learned how to change the name in Valorant by using the Riot Account. Online gamers can now customize their profiles with titles and player cards, making them more unique and distinguishable.

Players who like to remain anonymous in-game can even hide their names using settings. Things like account level and act rank have options to be hidden in-game.

Whether players like toying around with their names or prefer staying unknown, relish the joy of subtle interaction in Valorant.

Bonus Read: Learn to communicate with teammates by reading this easy-to-follow guide on how to use voice chat in Valorant.