There are many ways to earn experience and fight wars in Hearts of Iron 4. One of the more useful mechanics is the ability to deploy volunteers. However, committing troops to an engagement has its costs. Once you deploy volunteers to a war, you can’t bring them home whenever you want. There are specific rules that you have to follow that limits your ability to bring volunteers back. The good news is that there are ways to recover your forces, and our HOI4: How to Recall Volunteers guide has all the details for you about how to get those volunteers home in Hearts of Iron 4.

What Is a Volunteer

A volunteer is a troop or an air unit that you commit to another country that is currently at war. The troops will then fight for the country you’ve committed them to until you meet several conditions. You are responsible for supplying and reinforcing your volunteers even though they are fighting for another nation.

Volunteers are organized into volunteer divisions and deploy along with troops from the nation that they fight for. Volunteers are a great way to gain experience before you wage a war. They are also useful to diplomatically support an ally without committing to the war effort yourself.

The process of committing volunteers raises World Tension, so remember that before you start assigning divisions. The potential value of volunteers both from the standpoint of gained experience and diplomacy is invaluable. It is definitely a mechanic you’ll want to explore. 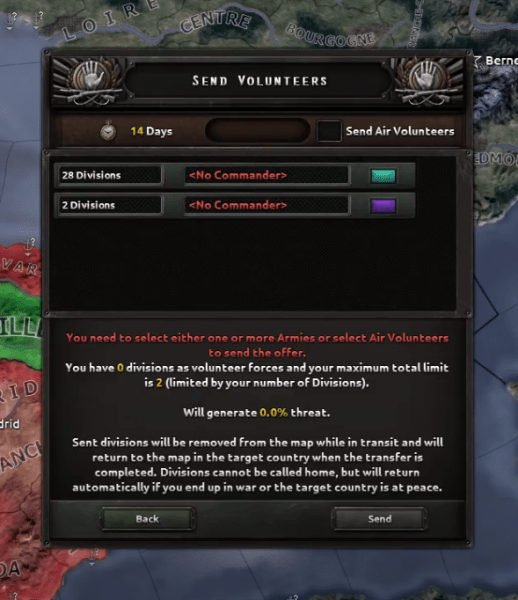 Your country’s ability to deploy volunteers is dictated by the type of ideology your people follow. Some forms of government can send volunteers much easier than others. Other ideologies need specific events to occur before they can commit troops.

Fascist and communist regimes can send volunteers at any time without needing to meet any other conditions. If you are playing as a nation with one of these two types of governmental ideologies, the use of volunteers is highly valuable.

Once you are in a position to send volunteers, choose the “Send Volunteers” option from the diplomacy menu of the nation you wish to support. That nation must currently be in a war to be able to commit volunteers to it. One final point to remember: you can’t be in the middle of a war and deploy volunteers.

Unfortunately, once you’ve committed a volunteer to war, you can’t simply call them back. Volunteering your troops and airplanes is a huge commitment. It comes with significant training and experience gains, but the cost for those perks is high.

Though you can’t freely recall volunteers in Hearts of Iron 4, there are ways that you can reclaim your troops and use the experience they gained.

Ending a war is the simplest way to regain access to your troops, though it’s not completely within your control. Because volunteers are troops committed to a war you don’t have a stake in, you also don’t have complete control over how the war is waged. As a result, you also have limited control over how it will come to an end.

This is where a bit of strategy comes into play. Committing troops too early in an engagement will lock them in a confrontation for a great deal of time. While they’ll earn experience for the entire span of the conflict, you will not have access to them.

When an ally needs support, but you don’t want to wade into the murky diplomatic waters of open warfare, wait until you feel there is a turning point coming in any war effort. Commit your volunteers at a time where they will actually help an ally with their conflict, but won’t bottle your troops up in a years-long engagement. 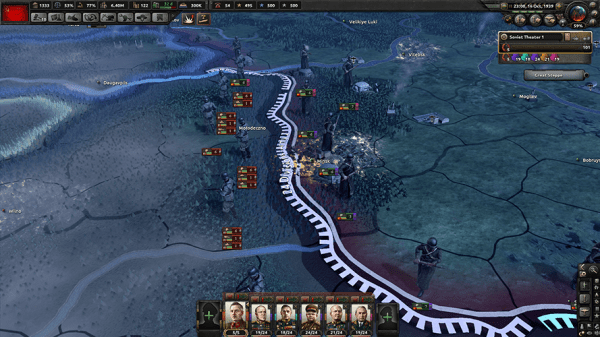 As mentioned above, you can’t deploy volunteers if you are already in an armed conflict with another nation. Because of that, declaring a war is a guaranteed way to get your committed volunteers back into your own pool of military resources.

Once you declare war on another nation, all of your deployed volunteers are automatically recalled to your nation. Two weeks after they start their return, you’ll have access to them once again.

The fact that volunteers return once a war is declared is valuable knowledge and lends itself to a useful strategy. If you are on the verge of conflict with another nation but are not yet ready to wage war, you can use the volunteer mechanic to gain training for your troops.

Commit troops to another war that you are not involved with, and allow them to train with ally nations. Then, when you are ready, declare war on your actual foe. Your volunteers will return, complete with 95% of their equipment intact, ready to wage war against your actual enemies.

If your style of play leads to more aggressive decisions and a willingness for armed conflict, this strategy for volunteers will come in handy.

Hearts of Iron 4 has tons of variables that are always at play, and no matter how well you plot out a strategy for war, things can go in directions you weren’t expecting or can’t control. That means it’s possible that your volunteers become trapped in an engagement that seems like it will never end.

If that worst-case scenario happens, there is one last way to bring volunteers back from foreign wars. You can disband the entire volunteer division they are stationed in. By disbanding a volunteer division, all your committed manpower and equipment return to your country, but the experience gains from that division are completely lost.

Once your troops and equipment have returned, you have the option of forming a new volunteer division to redeploy, but you will have already lost the experience you would have gained had the volunteers returned under other circumstances.

Still, if it seems like your troops are in a never-ending war, the cost of not having access to those resources could very well be greater than the experience they stood to gain before disbandment. It’s not an ideal strategy, but one that you might encounter if everything that can go wrong, does go wrong.

Loss through Battle or Attrition

This is an unfortunate risk you have little control over. The good news is, that it’s a rare occurrence, and as long as you remain diligent about your current conflicts, you will likely have enough notice to disband a volunteer division before they suffer a permanent loss.

HOI4: How to Recall Volunteers Correctly 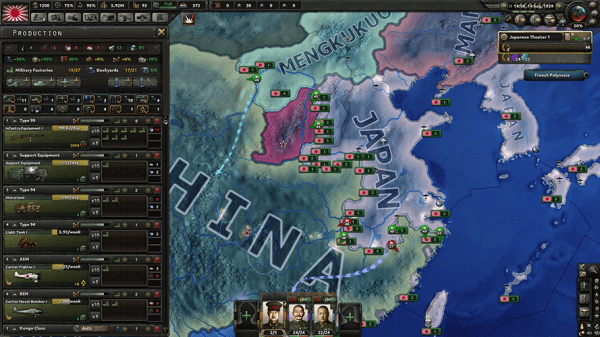 Volunteers are a powerful tool that you have to wield carefully. As you can see, once you deploy them to a war, there are a limited number of ways to return those forces to your pool of soldiers are airplanes.

Yet, when used correctly, sending volunteer forces into a war will grant you a great deal of experience and strengthen your relationship with allies. Timing is key when utilizing them. Deploying volunteers at the wrong moment will deplete your own forces. This is dangerous if you find yourself on the receiving end of an attack. Deploying them before starting a war of your own might give you the experience boost you need to win against an entrenched foe.

Declaring war, recalling volunteers, and using their gained experience is a winning tactical move. It can reshape the boundaries of the entire world. This strategy might be the key that will turn your nation into the greatest military power humanity has ever known!