Looking for an adorable free-to-play RPG to perk up your weekend?

I could have just the thing. Grimm’s Hollow is one of the most charming games I’ve had the chance to play in a while. I was surprised to learn it’s been on Steam since October 2019!

Created by the Ghosthunter crew, this eye-catching title is all about exploring the underworld. Your job is reaping souls, and searching for your brother. It’s fast-paced, engaging, and it comes with a pretty decent story.

I’m going to start this review with a quick admission. Undertale, the life-altering game by Toby Fox, is one of my favorite titles of all time. Honestly, it’s something I’ve played countless times, and don’t think I’ll ever get tired of. A quick glance at the content on the Grimm’s Hollow steam page shows the developers took some inspiration from Toby. 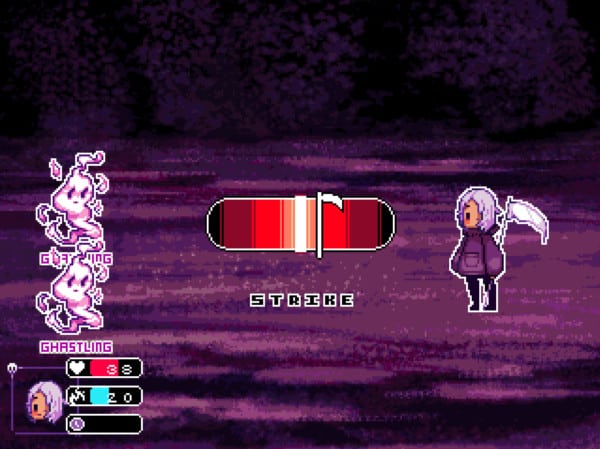 The graphics are very similar in style, and you get the same mini turn-based combat as you would  in Undertale. Similar to my favorite game, Grimm’s Hollow has an agile mini version of an RPG. You’ll get nippy combat, endearing graphics, and an engaging story to boot.

Today, I’m going to walk you through exactly what you can expect with Grimm’s Hollow. Don’t worry though; I’m going to do my best to avoid any spoilers, . You can enjoy the game with fresh eyes if you decide to play yourself.

A Stunning Example of the Mini RPG

In this game, you’re a character named Lavender. She wakes up in what we assume is “Grimm’s Hollow” – essentially the underworld. You wake up on a bed with balloons all around you. Soon after, a bunch of robed figures welcome you to their crew. Apparently you’ve successfully earned a new job as a reaper. But (unsurprisingly), you’re not sure how to feel about the gig.

As Lavender, you decide to slip away and explore your new surroundings in the hope of finding your brother. You’re sure he’s is trapped down here too. You pick up a scythe to help you out on your quest and slice your way through ghouls as you go. 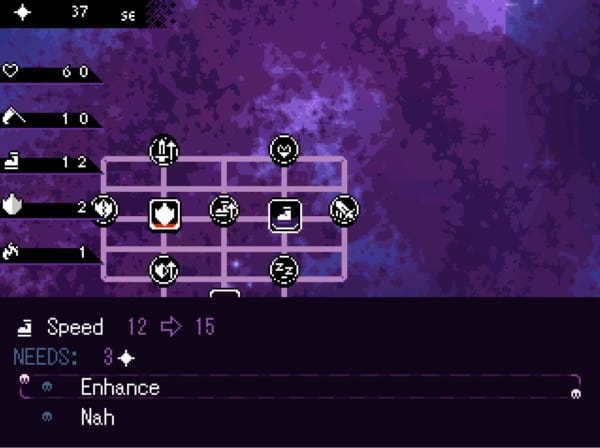 The combat experience is similar to Undertale, with a lot of focus on making the right choices at the right times. However, there’s a lot more to this game than whirling a scythe around.

The story and world-building elements of Grimm’s Hollow are the parts that had the most appeal for me. The reapers – your new crew – hang out in Grimm’s hollow to balance their energy levels.

As a reaper, you don’t have enough energy points on your own. You have to harvest extra from the ghostly enemies around you.

Those ghosts are usually driven bonkers by the sheer amount of excess energy they’re dealing with. So, they can’t move onto the afterlife until you take them down a peg.

Finding Yourself in the Spirit World

The more you learn about things like spirit points, the more the drive of the game makes sense. You’re not just tackling ghost for no reason – you’re performing an important act of kindness.

The purpose behind what you’re doing also helps to spur you on during the more difficult stages of the game. You don’t have a lot of power when you first enter Grimm’s Hollow. So, it takes a while to get to a point where you feel confident in each battle.

Every ghost you defeat gives you points you can put into your skill tree. These trees, a bit like the ones you’d see on Skyrim or Borderlands, give you the option to learn different moves. The more difficult the enemies are to beat, the more points you earn.

I will note that although I like the idea of the skill tree overall, it’s a bit confusing to figure out at first.

Unlike most of the skill trees you’ll see in other games, you don’t have to work up through points one level at a time. There’s a web of different “bonuses” that you can tap into. Although, the position of the skill on the web doesn’t have anything to do with how much it costs to unlock.

I’d advise taking a while to actually scroll through the skill tree and figure out what you want to do early on. The more time you put into figuring things out initially, the more enjoyable the game will be for you.

An Engaging World to Explore

The more time you spend in Grimm’s Hollow, the more impressive it becomes. The graphics are honestly gorgeous, and the cute pixel art really appealed to me. 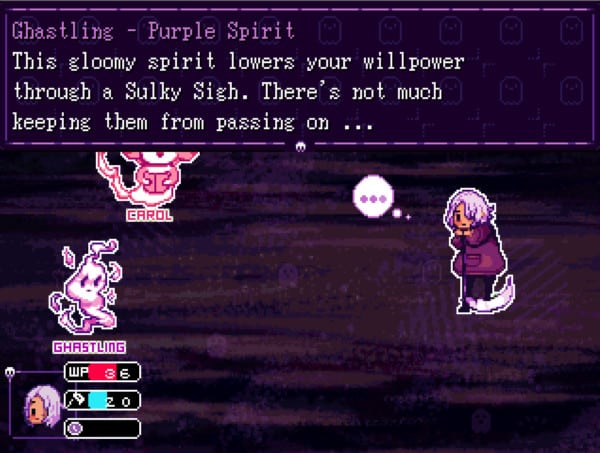 However, I might have been viewing things through slightly nostalgic lenses, thanks to Undertale. Even so, enemy designs are really adorable, and every character seems to have their own unique personality.

The landscape designs are impeccable too. Every area has its own color pallet which mutates depending on whether you’re sticking to the assigned path or not. It’s a cool detail, and something that not every developer would think of.

I did expect to see a few more puzzles included in this game. The most challenging part of the game involves dealing with hidden walls and strategically-based blocks. These moments aren’t really puzzling, but they do make the world you’re in feel more immersive.

Similar to Toby Fox’s creations, Grimm’s Hollow also has the added benefit of some fantastic chiptune music. I really loved the soundtrack and felt that the tunes matched what was going on each scene exceptionally well.

If you’re not much of a fan of turn-based combat and you want to spend more of your effort on enjoying the story (and the graphics), there is a “casual mode”. This speeds up the battling part of the game by reducing the health of your enemies and increasing your reflexes. 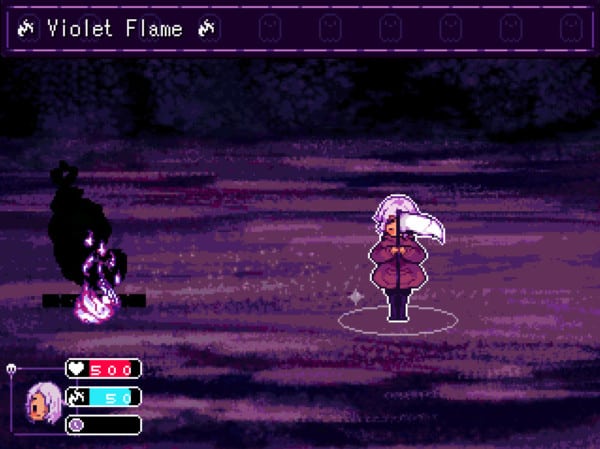 Grimm’s Hollow is a fantastic mini RPG with excellent story elements and graphics. I really couldn’t believe that this title was actually free to play.

It’s also worth noting that there’s more than one way to play (and finish) this game too. There are various bad and good endings, and they’re all beautifully well done. There’s some real replay value here if you know how to use it.

My advice? Give the game a try. It’s free to play, and it’s definitely worth your time.

You can play Grimm’s Hollow for free here.

If you’ve been following my reviews on Sidegamer for the last few months, you might have noticed a few things. I love horror, indie...

The more games I play, the more I see these interactive experiences as the creative concepts they are. While some games really are just... 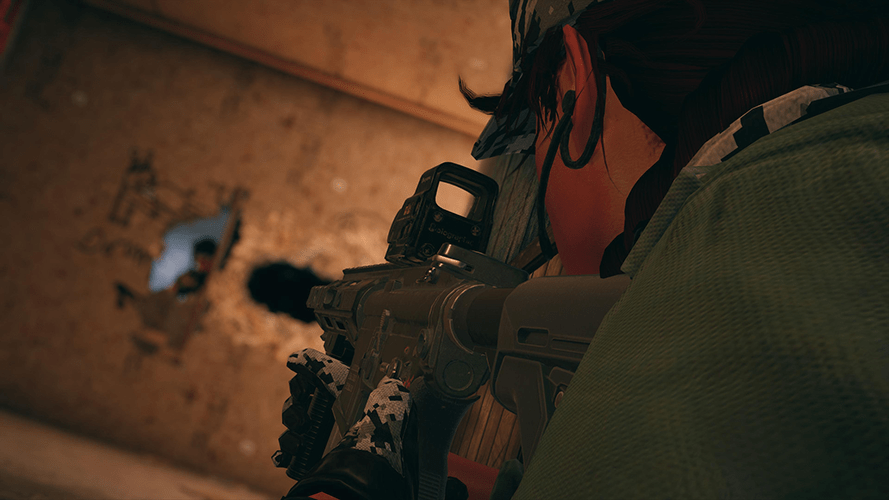 How to Change Servers in Rainbow Six: Siege

When you launch Rainbow Six: Siege, the game helpfully determines your data center automatically with no input required from you. This isn’t the best...