Usually, when I cover free-to-play games to review on SideGamer, we look at full titles.

There are plenty of options out there, like HellTaker, or Enemy on Board.

This time, I’m taking a slightly different approach and looking at a free demo.

Why? Because it looked like a lot of fun.

Plus, let’s face it, many of the “prologue” free-to-play titles on Steam are just demos anyway.

Today I’m going to be introducing you to Fly, Punch, Boom: First Impact. 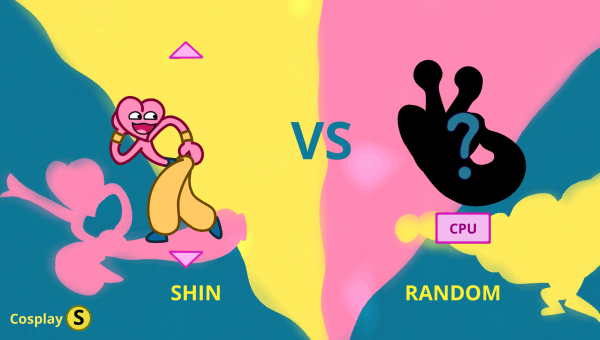 This is a game that claims to be the wildest anime fighting game on the map.

At first glance, the preview videos and pictures for the game reminded me of something plucked straight from the early days of the internet. If you ever played a flash game on Newgrounds, you know what I mean.

But there’s more to this game than an adventure through internet history.

The inspiration behind Fly, Punch, Boom is pretty obvious.

If like me you’re a fan of anime, you’ll know that these cartoons tend to get a bit dramatic with their fighting scenes. We’re talking people flying through space, glowing with the power of a thousand suns, and punching people so hard they see the curvature of the earth.

Fly, Punch, Boom brings the same hyperbole and exaggeration into a fighting game.

If you’ve ever wanted to uppercut a friend so high that they got kidnapped by aliens, you’re all set.

Jollypunch games have happily decided that no scene is too outlandish for their game. You’ve got to respect them for that. 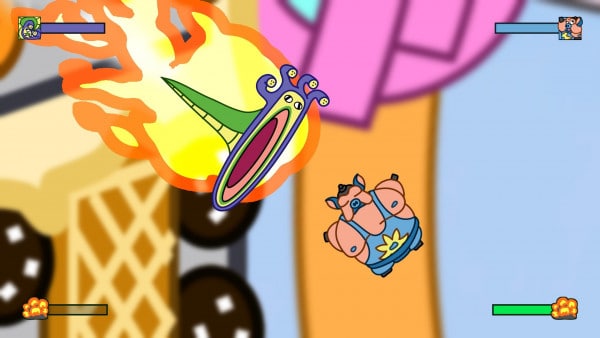 So, what makes this game any different from all the other games that base their fights off anime franchises?

Well, first of all, the aesthetic is different. This game is less Dragon Ball Z, more Powerpuff girls.

Rather than using cutscenes to show you how awesome your super move was, Fly, Punch, Boom lets you enjoy those super-powered moments. It’s a game that throws you head-first into gravity-defying feats of violence and absurdity.

I’m talking punching someone so hard they hit the moon in the butt.

Over the Top Scenery and Fun Gameplay

The unique approach that Jollypunch games took with this game shines through in a lot of the gameplay. From the character and level design to the confetti blood that bursts out of your foes when your punch connects, everything is bright and fun.

However, while Fly, Punch, Boom isn’t just your average fighting game in a lot of ways, you still get a few predictable experiences.

For instance, you still pick who’s going to fight at the beginning of a battle, with one on one, or two against two modes available. Just like with most fighting games, you also keep battling and discovering new moves until one of you gets knocked out (or launched into space).

One slight issue I had with all the madness of this game is that it can be pretty difficult to keep track of what’s going on.

You’re not fighting on a solid platform, you’re flying around, dodging threats while you deal blows to your foe. All the while, your landscape is changing in the background, with new things appearing all the time to distract you.

The confusion means that winning the game isn’t just about knocking your friend’s health bar down to zero. If you click the wrong place at the wrong time, you’re done for.

Colliding in the Chaos: Figuring Out How to Fight

Unlike most fighting games, Fly, Punch, Boom also has a pretty hefty reliance on quick-time events. That’s not going to be good news for some of you.

Not only does your win depend on your ability to respond to those quick-time events, but you don’t just have to click your mouse at the right time. Usually, quick-time events involve pressing the right letter on your keyboard in a rock-paper-scissors match up.

You need to press those keys faster than your competitor too – which makes winning a massive challenge. 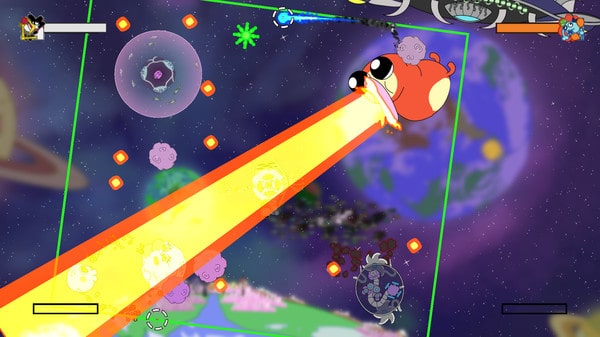 If you don’t mind dedicating some extra time to finding the keys in seconds, then the presence of quick-time events does make this title a little more special.

To begin with, you fly around in a massive environment, clashing with another character and hoping you can hit the right keys on time.

This definitely isn’t the kind of game that you can win just by finger mashing the same buttons over and over again.

There are a handful of characters to explore in Fly, Punch, Zoom, but you only get access to a few in the initial impact demo version.

From the ones I played with, there doesn’t seem to be a lot of difference between each option, aside from a slightly different ultimate move.

The lack of diversity was a bit of a shame for me – but who knows, maybe you get more out of the full, paid version?

Is it Worth Buying the Full Version?

Here’s the thing, this game is fun – silly and wacky.

I enjoyed spending a bit of time exploring the different signature moves and fighting arenas. However, the overall chaos of the game wore a bit thin over time.

Without any in-depth characters or storyline to back up what was happening, Fly, Punch, Zoom started to remind me of those annoying teens from the nineties who were “so random”.

It felt like the game was being weird, to be weird.

So, does that make this game bad? 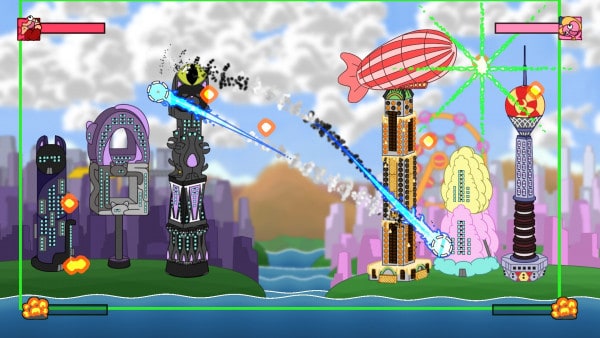 Not totally. There are a lot of extra pieces you can unlock as you learn how to master the game. This includes characters that you can’t access until you accomplish certain goals. Plus, every character has a “cosplay”, or an alternative costume to unlock.

These extra components do keep you coming back for more – at least for a little while.

The colorful scenes are eye-catching, and the over-the-top fights are entertaining (for a while). I also liked the fact that there are dozens of stage fatalities to explore – a bit like mortal combat. According to the game developers, there are 40 fatalities in the full game.

Personally, I’d definitely recommend the free version of this game for a bit of hyperactive fun and Looney Tunes-style madness. But I can’t see the title having much of a future with a hefty price tag. 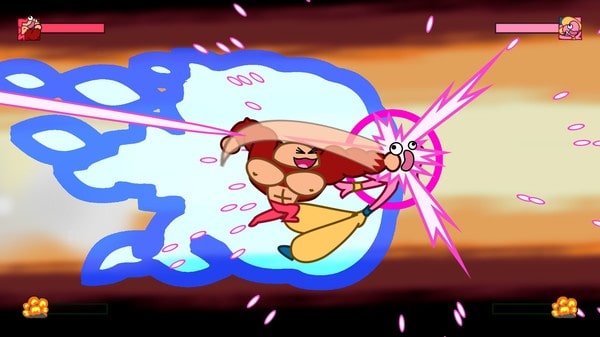 The fact that so much of the game relies on the rock-paper-scissors element makes the rest of the fight feel a bit superfluous.

A Bit of Random Fun

If you’re looking for a little chaotic fun, and you don’t want anything more in-depth than that, this is probably a fantastic game for you.

The promise of various extra features on the paid version is almost enough to tempt me to give it a try. I did quite like the unique cartoon graphics, and the soundtrack was pretty awesome too.

However, a lot of the game felt like it was made particularly for young teenagers or kids on a sugar rush. Maybe I’m just getting too old for this sort of stuff?

The free version of Fly, Punch, Boom is well worth a try if you’re playing solo. If you have a group of friends who you want to play with in party mode, then it might be worth upgrading to experiment with some extra stage fatalities.