In the beginning was Sim City, back when home computers still had black-and-white screens that burned your retinas. You could be a mayor, nay, a city builder! As the years progressed and more versions came out, people all over the world developed a passion for city management.

Then came Cities: Skyline, developed by Paradox Interactive, and filled the niche that the 2013 edition of SimCity had failed to keep to itself.

The core of the game is actually the same as SimCity’s. You build a city from scratch, deciding where to place roads, power stations, offices, houses, collect taxes, deal with catastrophes, and so on.

Like all planning and strategy games, your choices can and do have consequences in the long term. This can make the game a little frustrating, especially at the beginning. We decided to compile this list of Cities: Skylines tips and tricks to help you get started with your career.

First off we’ll look at some tips for laying out your city. 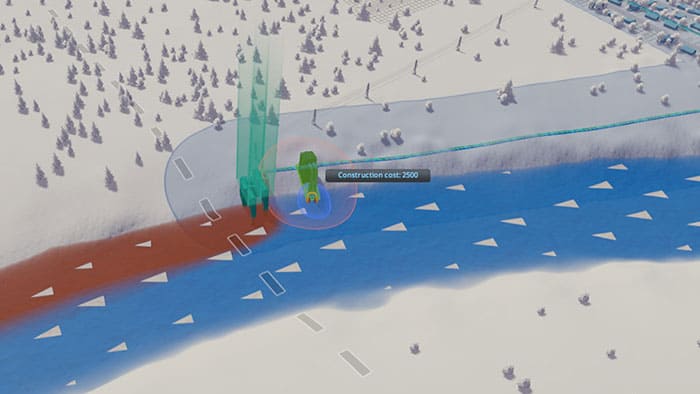 It may seem obvious in hindsight, but many beginners miss this. Your sewage water must end up somewhere, and that’s usually a river. But a river is also where your fresh water comes from!

Make sure that you position your intake water pipes upstream of where the dump point from the sewers. Leave enough space between those points to avoid any accidental mixing.

2. Use Grids at First, But Learn to Use the Environment 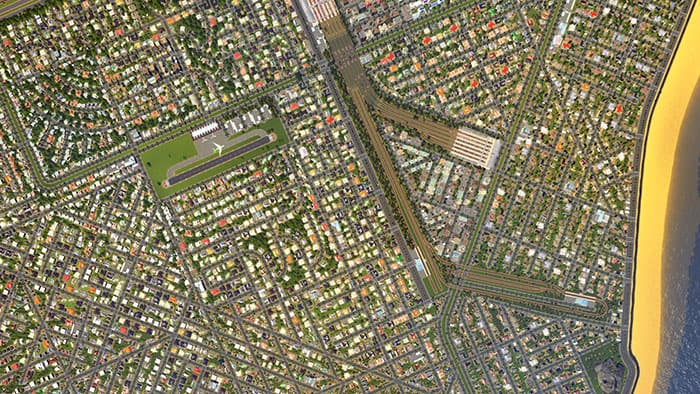 Designing your city’s layout on a grid is the most obvious way, and it’s also a very practical approach. After all, most cities in the United States follow a grid pattern for a reason. It’s easy to plan, easy to develop, and also easy to navigate. The downside is it may feel quite artificial.

A layout that follows the natural environment is harder to devise but is generally more pleasant. It also tends to use resources better, as you’re working with the land rather than against it. The trick is to spend some time looking at what you’re dealing with, before building. Hills, rivers, forests, clearings — these are all shapes that you can use to your advantage.

Another tip is to plan for different parts of the town separately. This way, each specific area uses the available land as best as it can. Divide et impera. You can use roads to connect them later. 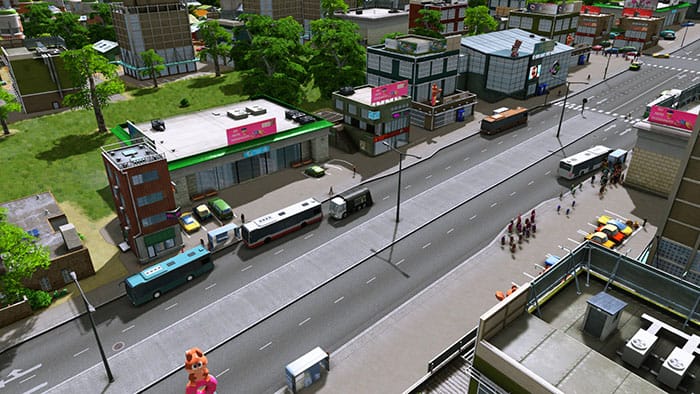 The key here is that vehicles take the shortest possible route to their destination, which is not always the fastest. Use this to plan not just your roads and public transport, but also to decide on the best layout for your districts. Don’t forget the highway network, to let people in and out! 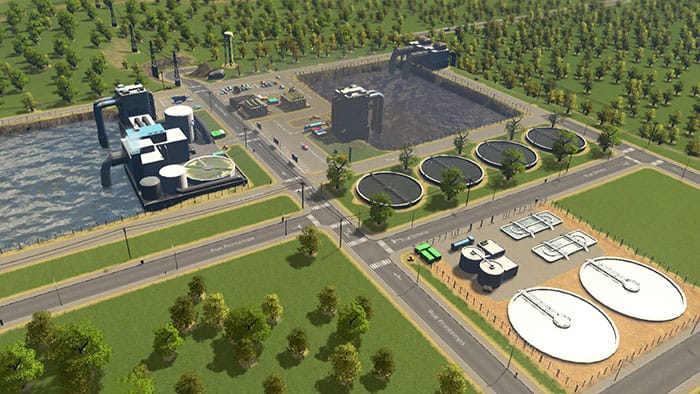 All vehicles share the same roads, including those for the city services. Garbage trucks are the ones that cause the most trouble: they fill up, go back to the landfill to be emptied, and come back to continue their rounds. That’s a lot of traffic.

In addition to planning roads to prevent jams, having more landfills in different areas makes a big difference. Each one will control up to 15 trucks, and each group will serve a different sector.

As soon as you have a chance, build incinerators. They can control twice as many trucks, and they double as power sources. Indeed, a single incinerator provides as much power as two windmills, give or take. (Sorry, Greta.) 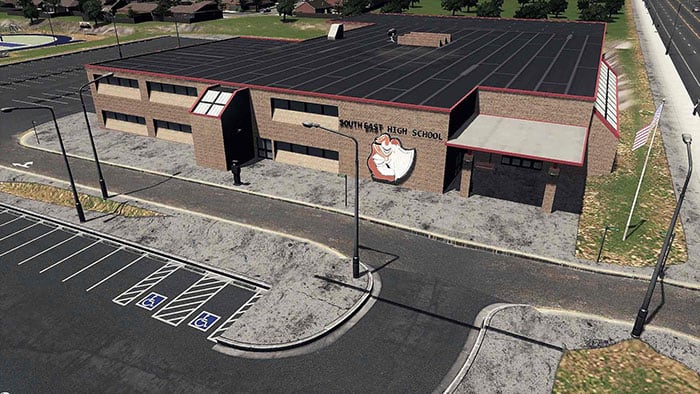 It may be tempting to provide all services as soon as they become available, but that is counterproductive. Especially if you’re a new player, you will end up spending a lot of money to provide things that are not even needed.

The best way to save money and be efficient is to provide services only when people need them. Keep an eye on the bubbles that pop up above buildings. 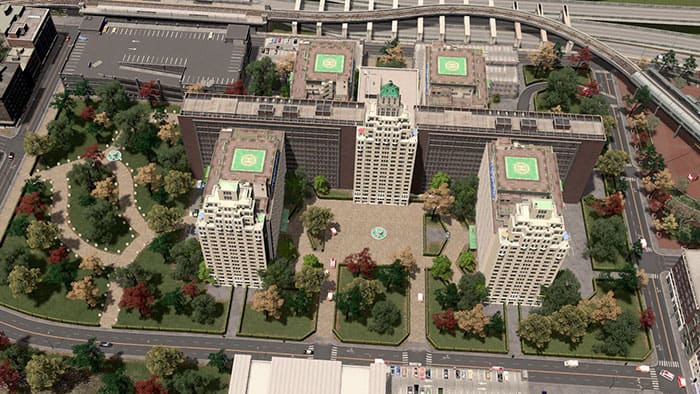 You may be tempted to build a single big hospital instead of multiple clinics. At a glance it makes sense, because you’re putting your money into a single thing, which should optimize both the revenue and the service. Right? Wrong!

A hospital can control more ambulances and host more patients. It also costs twice as much per ambulance and about 20% more per patient. When you consider the extra distances involved, you can see how multiple clinics scattered around the city are more efficient and convenient. In fact, you only need one for every 10,000 inhabitants! 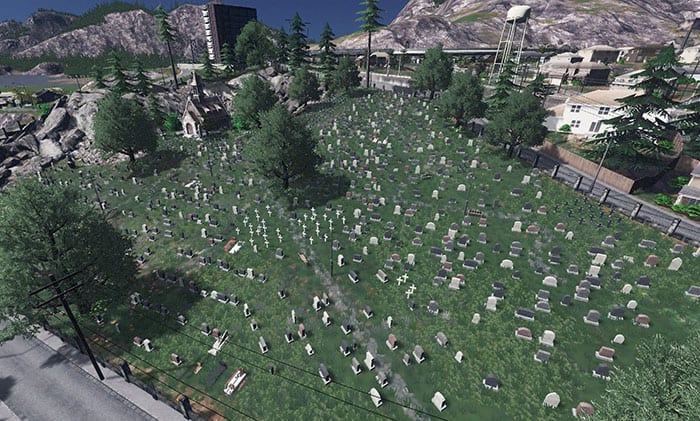 Not all patients manage to go home, though. Those who die can either be sent to a cemetery or a crematorium. The latter is more expensive, but also more efficient (people are “processed”, as opposed to “staying there”). The problem is that not everyone wants to be cremated, just like in the real world, so you should always have at least a cemetery.

On the topic of death, one oddity of the game is that people who come to your city are generally the same age. As a consequence, if you expand your residential areas too quickly, you will have lots of people who end up dying at the same time. A slow but stable increase in population helps against death waves.

Keeping on top of traffic is vital in City: Skylines. Here are some useful traffic tips.

7. Think of the Road Hierarchy 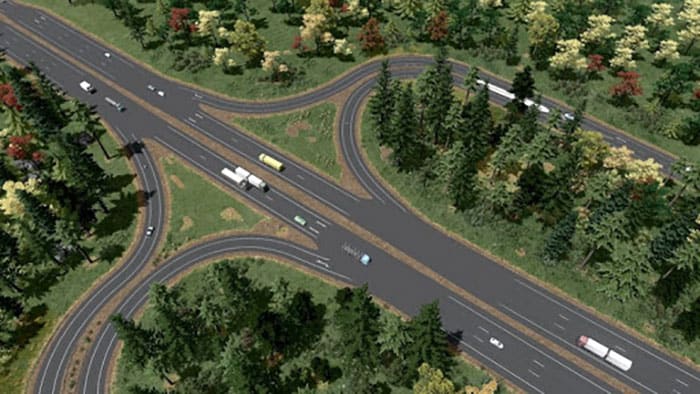 If you look at any real city, you will find that roads are laid out like trees. Smaller roads are connected to ever bigger ones, with the biggest roads generally connecting various districts, and ultimately leading to highways in and out of the city.

Note that this doesn’t mean only having a giant trunk downtown and smaller, leafy pathways on the outskirts. You can mix and match, just try to adhere to this principle. You will be surprised at how easily traffic flows.

8. Roundabouts, Up To a Point 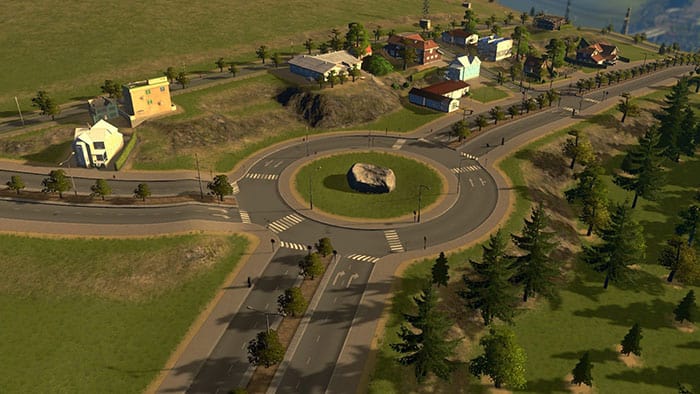 Many cities in the real world, in Europe especially, are replacing traffic lights with roundabouts. They help with congestion in medium-traffic areas because nobody has to wait if the intersection is empty. As traffic increases, however, they become less and less efficient, as they tend to clog up.

If you start experiencing a heavy traffic flow, remove roundabouts and add more lanes, and try to avoid intersections in the first place. Build tunnels, bridges, bypasses, and anything else you may need so that vehicles don’t have to stop. 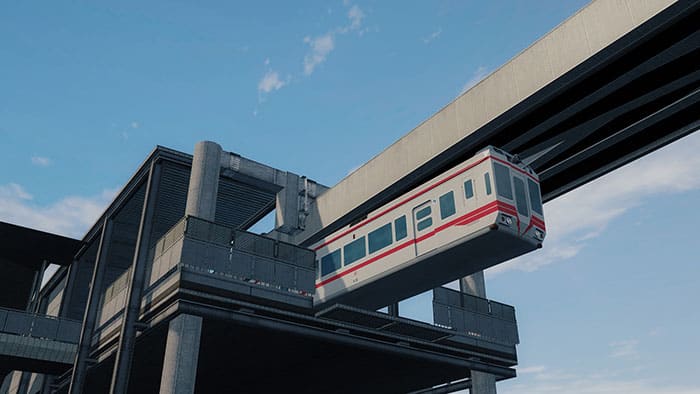 This is an obvious one for those who are familiar with big cities in the real world but may baffle many others. Just like roads are supposed to be a tree-like hierarchy, so should public transport.

Different systems have different reaches and capacities, and you should use that to your advantage. For instance, you can have buses cover the residential suburbs, funneling people into bigger monorail or metro stations. From there, they can all move towards industrial areas together, and then take multiple trams to specific sub-areas. Of course, only use what you need!

Public transport is generally more efficient at decreasing congestion, as more people share the same vehicles. Many European cities are trying to push that, so look at them for inspiration. 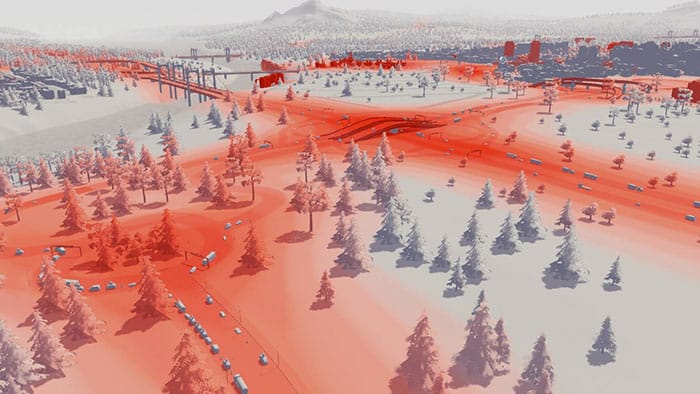 Industrial areas, almost by definition, generate pollution. This is why they generally start out far from residential areas or only have limited housing around them. This is what you should replicate in the game.

Commercial areas with a high density are not much better: they generate sound pollution, which is just as bad. Keep houses far enough apart to keep people safe, but connected well enough that they’re accessible.

One trick is to use offices as a buffer zone. They do not generate pollution of any kind, so you can keep them close to houses. That would also reduce traffic if the workers happen to live nearby!

11. Divide and Conquer, or: Split It Up into Districts 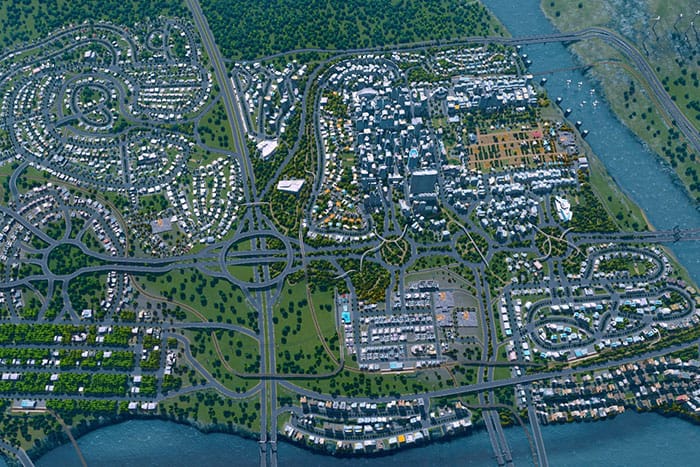 Once your town turns into a city, one-size-fits-all measures won’t apply anymore. Different areas may require different policies in order to keep the people happy and the economy stable. This is where the Districts feature comes in.

By partitioning your city into different Districts, you can apply different rules and policies to each one of them. This ensures that — for instance — the industrial part is more focused on cargo transport, whereas the residential part gets better access to personal services.

Any Other Cities: Skylines Tips and Tricks?

Only one, especially for beginners: 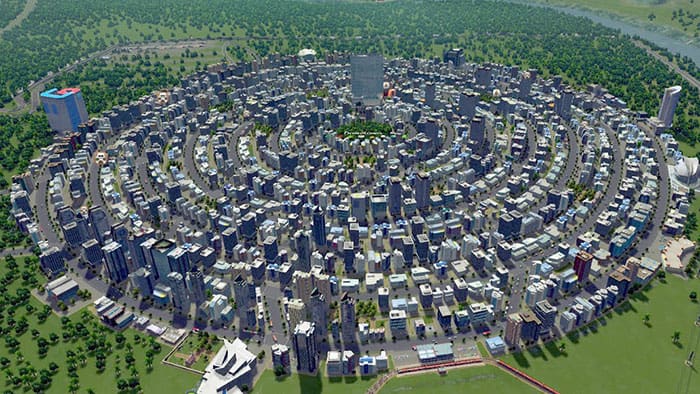 Cities: Skylines is one of the most approachable games by Paradox Interactive. Compared to grand strategy games such as Stellaris, the scale is certainly smaller and the context is much more familiar.

Still, the freedom you have as the “god” of the city, and then as its mayor, is staggering. It’s easy to feel overwhelmed at first, with so many options and possibilities.

Your first few cities will be a mess, but that happens to everyone. Our advice is to enjoy that mess instead of being disappointed and learn from it. There are so many subtle things about this majestic game that you will start thinking about your cities even when you’re not playing.

Just get over that initial disappointment you may feel. If you’re stuck, you can always try to replicate your own city!