If you want to have cities, you have to build roads. A truer statement may never have been said. Cities: Skylines relies on roads, but direction matters. If you’re like us, you’ve probably found yourself placing one and realizing only too late that it’s going the wrong direction. In Cities: Skylines how to change road direction is an important thing to know.

Cities: Skylines has a huge number of road options to experiment with as you expand your infrastructure and support larger populations within your city limits. You have the option to build both one-way and two-way roads, and the number of lanes can go from two to six lanes for surface streets. And you can scale all the way up to full-on highways. Keep in mind that highways don’t allow for roadside zoning. So you don’t want to build one going right through the middle of your downtown.

Once you’ve laid down a network of streets, you can view their status by checking the Traffic Routes info view. It provides you with all the information you need to know about the traffic flow of your streets and how street junctions are operating. It even allows you to adjust the route of each road.

For our purposes, its biggest value comes from showing you which direction traffic is flowing on a particular road. This is where you’ll discover any roads that aren’t running in the right direction. Most likely, the direction of a road will be a problem in downtown areas where there are a lot of one-way streets. 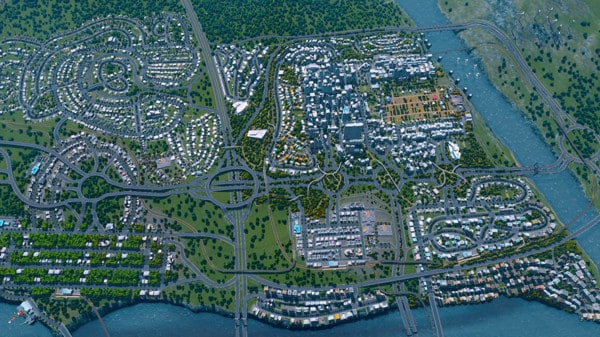 How to Change Road Direction

If you’ve reviewed the Traffic Route info view and have discovered an offending street traveling the wrong way, have no fear, there is a solution. First off, make sure you’re using the most current version of Cities: Skylines. Back when the game launched, what we are about to explain didn’t work. As Paradox continued to update the game, they added the ability to change the direction of one-way roads.

If you’re familiar with the game at all, you’ll know that there is a button near the bottom of your screen while as you build roads labeled with an exclamation mark. This is the Upgrade Tool. The base functionality of this tool is to upgrade the road type of a street you’ve currently selected. However, it can you can use it for other things as well. If you want to change a two-way road to a one-way road and vice versa, this is the tool you use.

It’s also how you change the direction of a road. To do that, simply select the Upgrade Tool. Then mouse over the road you want to change, and right-click on it. It’s that easy! Once complete, all traffic on the road will start to flow in the opposite direction. Just make sure that direction isn’t into oncoming traffic.

There you have it. It’s simple to change road direction in Cities: Skylines. For other beginner tips and tricks, check out this guide!

In this article:cities skylines, how to, howto, paradox, paradox interactive, roads, simulation