In history, Leon Trotsky never assumed control over the Soviet Union. But that’s one of the great things about Paradox Interactive’s grand strategy games, history is just a suggestion. In Hearts of Iron 4, if you take the right steps, you can install this historical figure as the head of the USSR. In HOI4, how to get Trotsky to take over the Soviet Union is a valuable strategic question.

Why would you want to play as Leon Trotsky? Simple really: The man possesses a leadership trait called Permanent Revolutionary. This skill reduces Foreign Subversive Activities costs by 30%. Combine this natural trait with the National Focus of Permanent Revolution, and your reduction bonus increases to 50%. Now, if you complete that focus, it will unlock NKVD Primacy and then NKVD Divisions. With all of these focuses complete, your cost to Foreign Subversive Activities is reduced to nothing!

What this means is that you can stage a coup instantly in any location where Communist sympathies are high enough. It’s an extremely powerful strategy for subversively taking over countries like France and parts of Great Britain that never actually fell to the power of the Soviet Union.

HOI4: How to get Trotsky

The steps for unlocking Trotsky are relatively simple. Obviously, you need to play as the Soviet Union. At some point around 1936, a National Focus called The Great Purge will occur. Ignore it! If you pursue this event, the former Soviet leadership will be replaced with Stalin sympathizers, and Trotsky will wind up assassinated.

Instead, wait until 1938 when the Fourth International event occurs. By following this new chain of events, you’ll take part in Trotsky Returns to the Soviet Union and finally Trotskyist Coup. This last event ends with the assassination of Stalin and the installation of Trotsky as leader of the Soviet Union. 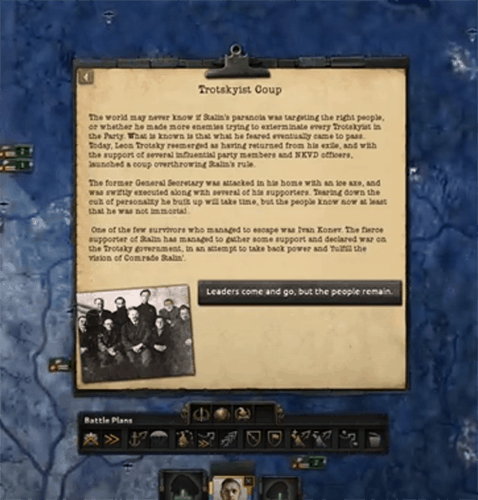 The consequence of this is that a civil war will break out in the USSR. Have no fear though! By all accounts it’s a pretty minor conflagration, and should be quelled with relative ease. Once the borders of the USSR are stable once more, Trotsky (and you) will finally be able to create the Communist society that Lenin always had in mind.

From that point on, you can carve a new future for the Soviet Union. Keep in mind that the overall strength of the Soviet superpower decreases without Stalin as the head of state. However, the above strategy for reducing the cost of Foreign Subversive Activities provides several new ways to carve a path for communist world domination. If you are particularly skilled with Trotsky at the helm, you should even be able to foment discontent and outright chaos in the United States, which up to this point should still be struggling through the Great Depression.

HOI4: How to get Trotsky is a good question to ask for any player who wants to experiment with a world where Lenin had his way and Trotsky assumed power. While you’re rewriting history, be sure to check out some of our other Hearts of Iron 4 guides!