Usually, when I’m looking for a free-to-play Steam game to review, I focus on appearance first.

It’s shallow, I know, but a well-designed game often indicates that you’re going to get some serious attention to detail.

This week, I figured I’d go in the opposite direction, just to shake things up. This led me straight to a Lo-Fi horror puzzle game: A Place, Forbidden.

This vague title does not offer much from a visual perspective. Your surroundings are heavily pixelated, reminding me of the first tomb raider games. Everything judders awkwardly as it loads, giving you the sense that you’re in a game not totally finished.

However, there is more to this game than meets the eye.

Exploring the Library of Ouroboros

The first thing you need to know about A place, Forbidden, is that it’s in the library of Ouroboros. 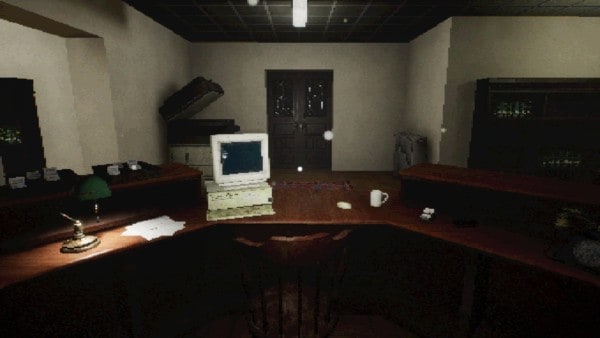 This is a tomb of knowledge that exists everywhere and nowhere all at once. No mortal man should ever lay eyes on the knowledge within this library.

But as you’re already here you might as well take a gander.

The protagonist in this game wakes up in a library that they don’t remember finding.

At first, you think you might just slip out of the back door, like a guest at a boring party. The trouble is, the library isn’t so keen on you making your French exit.

As is often the case with mysterious, Lovecraftian buildings, the Library of Ouroboros seems to have a mind of its own.

It’s sick of defending all those creepy books. Now it’s going to make you jump through hoops for entertainment instead.

For a game that promises to remain free forever, the A Place, Forgiven is surprisingly in-depth. There’s a huge bunch of puzzles to overcome, and tons of reading (surprise, surprise). Since I’m a big fan of reading, I didn’t mind stumbling across various books and notes. 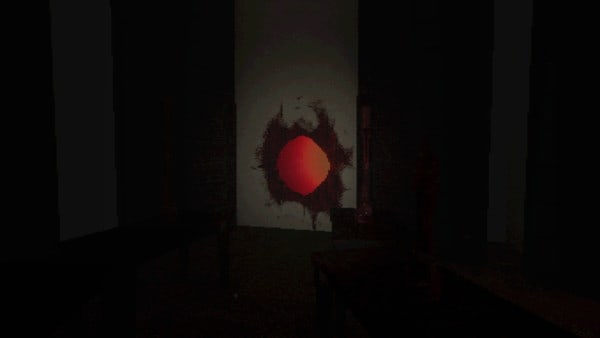 What I did have a problem with is how imperative those notes are. You don’t have to read them to progress through the game, but you do need to scan the pages if you want to understand what’s going on.

A Puzzling Horror with an Intriguing Story

If you’re not in the mood for a lot of reading, then A Place, Forgiven probably won’t be much fun for you.

If you don’t mind a bit of a narrative then it helps to know that the story is pretty good. The more you read, the more you learn about the library, and yourself.

As you struggle to work your way through a library/maze filled with creepy holes in the wall and corridors that don’t go anywhere, you learn that your character isn’t as innocent as he seems.

It’s a sophisticated idea that comes from a very simple premise and I really appreciated that.

The design, the content, and even the audio is there to make you think. The story of your character gradually changes the way that the game feels. 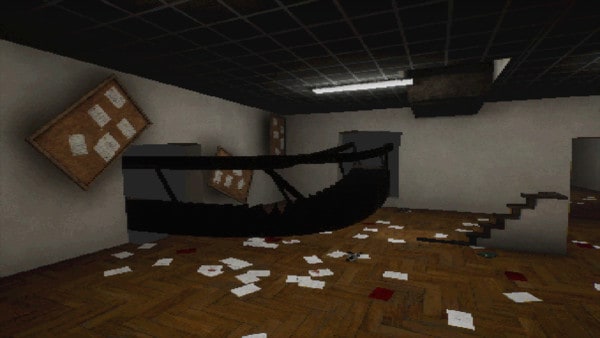 Hearing a voice muse about the number of arms and legs a human would really need is sort of humorous but in a nerve-wracking way.

The fact that the developers, A Team Forbidden, made this title for a PS1 Demo Disc makes it even more impressive.

When you learn that the company was trying to mimic the PS1 style, the horrific graphics suddenly become charming.

It’s hard to create a game that has the awful graphics of a PS1 title and still manages to be genuinely frightening.

A Place, Forbidden does it with gusto. The more you play, the more you realize just how effective the blocky graphics and muddled textures are. They make it even harder to understand the place you’re in, by offering just a basic idea of what each object is.

Your obscured vision means that you’re constantly in a state of general anxiety and confusion. Combine that with the full horror of the story and the excellent sound design, and you’ve got one hell of a game.

A Return to Horror Gaming Roots

Aside from contributing to the general discomfort of the gaming experience, the PS1-style design also delivers a hint of nostalgia. It reminded me of games like Silent Hill and Perfect Dark, where being unable to see what lurked ahead made it difficult to continue at times. 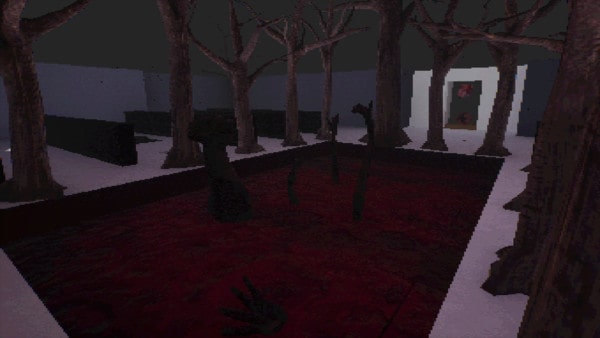 As for how this game actually plays, the mechanics, fortunately, are quite good. Solving puzzles is relatively easy, but you’ll have a few challenging moments that make you feel extra clever.

For instance, there’s a point where you need to read a handful of stories and use those plots to figure out the order of a series of tablets.

Every puzzle manages to be just tough enough to be engaging without becoming overwhelming. At the same time, though the visuals come from the old-console world, the mechanics don’t. You won’t have to spend too much time clicking on doors that won’t open, or glitching into walls.

Another bonus of this title was how much the little details really pay off. Things seem to constantly fall over and change in the subtlest of ways. It’s enough to leave you wondering whether you’re actually making progress or just going crazy.

Because the visuals are so poor, you’re more reliant on the content throughout the game for insights. This means that you form a deeper connection with the protagonist’s quest for knowledge–the journey that brought him to this library.

The Late Fees Must be Hell…

I went into this game fully expecting to hate it.

The screenshots and video demos look terrible. Plus, most demo-disc-style content is riddled with mistakes at the best of times. Yet somehow, I found myself actually wanting to continue playing.

The way that the publishers tell stories through the actual books and notes in the library is compelling. The fact that you need to learn to continue moving forward makes the whole experience so much more engaging. I didn’t even find any major bugs or glitches that brought me out of the experience which is honestly a lot more than I expected. 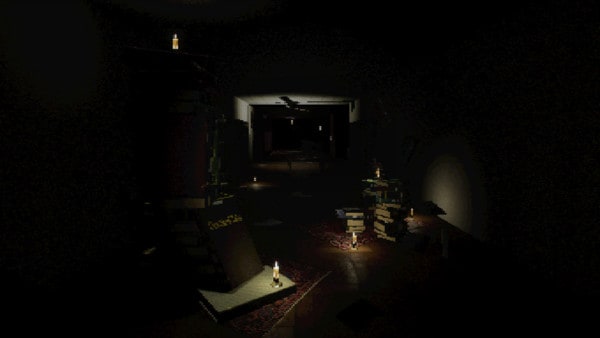 The biggest complaint I had is that there weren’t any additional games to explore by the developers. I really wanted to see how they tackled other styles.

Still, with about an hour and a half of gameplay to offer, A place, forbidden is a decent introduction to the company. I’m thrilled that I took the risk and tried something new.

Ultimately, this isn’t a game that you’re going to have the most fun playing. However, if you’re a fan of the art and imagination that goes into making a great game, you’ll appreciate this. A Place, Forbidden makes the best of it’s aesthetic, and gives you some fantastic puzzles as part of the experience.

Check out A Place, Forbidden, for free here.